Scott Pilgrim is, for lack of a better term, crack—pure, addictive, comic crack. Once you buy into the conceit (that the entirety of the plot takes place in a video game) and invest in the human element of its characters, I doubt you will be able to put the book down with ease. Scott Pilgrim is also a quick read, not because it’s particularly short (it’s not). Rather, it possesses a sort of frenzied pace—something Edgar Wright realized brilliantly when editing the film—where the events of the books just seem to keep flowing together with few breaks in between, as close to stream of consciousness as the comic book industry gets. 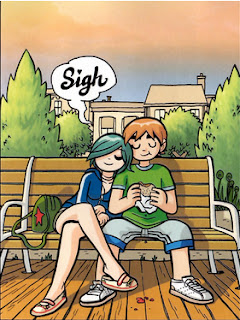 As established in the previous entry, this blog covers two installments in the Scott Pilgrim franchise, in particular, volumes three and four.

Volume three sees Bryan Lee O’Malley realizing all of those things that makes this series work as well as it does. The first two volumes, while good and just as fun as anything that follows, find O’Malley at a time where he is still maturing as an auteur and finding his footing in the fantastical world in which Scott Pilgrim lives.  From introducing Todd Ingram and Roxy Richter to imploding Honest Ed’s

in one of the best panels the series ever produced, O’Malley  takes charge of the surreal touches that were somewhat underwhelming in the first two books, but beyond that, the story begins to find an emotional foothold as well. Up until book three, we still know very little about who Scott Pilgrim was before this point and even less about Ramona (though, with her, that’s kind of the point). We know that he had been dumped by Envy Adams who now fronted the successful band, The Clash at Demonhead, and we know a little about his history with Kim Pine and another girl, seen only in flashbacks, by the name of Lisa Miller, but we don’t have any understanding of how these elements affect Scott Pilgrim as a character with emotions and motivations aside for providing some exposition to root the wild and shifty plot. In fact, we could not, without inference, say they affected him at all. We’ve only gotten hints of the heartbreak left by Envy Adams, and as for Kim Pine or Lisa Miller, there seems to be no discernible effect on our protagonist.

Of course, that is until Volume 3 and 4 because these ghosts of Scott Pilgrim’s past return and make their presence known. First, Envy resurfaces as Todd Ingram’s, evil ex number 3, new lady friend, and it is evident from the beginning of the volume that there are not only lingering burdens from Envy and Scott’s relationship but that those burdens weigh heavily upon our hero. Then, in Volume 4, Scott runs into Lisa Miller, and we realize how his aloofness distresses real people (real in the sense of this series).
I do not mean to suggest that the novel completely shifts gears tonally and transforms into a quirky indie drama straight out of Sundance, though in clumsier hands it could easily be just that, but it does add depth to the fun which is something often overlooked in entertainment pieces.  Scott Pilgrim, or O’Malley, does not ask that you invest the entirety of intellectual prowess into understanding the events and thematic developments of the series, but it doesn’t require you to turn your brain off either.

But you don’t read Scott Pilgrim for relationship plots. You read Scott Pilgrim, if I may generalize for a second, for the bizarre moments, video game references and evil ex fights. Honest Ed’s imploding, Todd’s hole in the moon, Ramona’s hammer having a +2 bonus against girls, the Vegan Police, Scott leveling up, among other things, those are the elements that make this series the comic book crack that it is.
~ The Black Ness Monster ~
comic books indie Scott Pilgrim 2011-08-08
The Black Ness Monster

Previous: Neil Gaiman: Humble and Brilliant Realist
Next: Spider-Man Has A Fever….