Hello comic book enthusiasts and welcome back to Comical-Musings.  This site/blog exists to tell you about good comic books that we have read/are reading.  Often that takes the form of a review, sometimes just an opinion or two.  We are a family oriented website that believes that kids should read comics again.  We try not to be crude or swear or focus too negatively on anything.  Therefore, we are thrilled to spotlight a super hero team that tries to uphold similar standards in their duties to the public, The Justice Society of America. 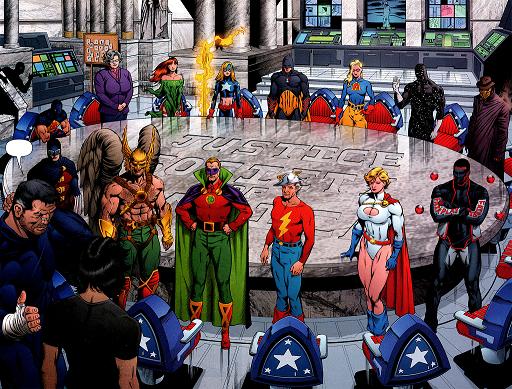 The Justice Society of America or “JSA” are a group of heroes that were popular in the 1940s.  They had successful series and later, it was revealed that they were actually on a parallel earth…Earth 2 (This is why people hate DC).  When DC’s mega crossover “Crisis on Infinite Earths” occurred, all of the Earths were merged together and the JSA found themselves back in business on Earth as predecessors to the Earth’s modern heroes after World War 2.  They joined various superhero teams and had very little success or interest from the American people until the late 90’s and early 2000’s where they got re-established as a team.  Today’s comic book review is from the 2007 series Justice Society of America written by Geoff Johns and drawn by Dale Eaglesham.  This series started at number one and is still ongoing until next month when issue number fifty-four will be a casualty of DC’s new company-wide reboot.  We will be talking about issues one through four.

Issue number one of JSA starts off with a scene of a murdered family.  This is significant as the theme of the JSA is one of family.  If you wipe out a superhero’s blood line, then you don’t just kill that particular hero, but anyone else that would take up his mantle.  The villain in this story arc isn’t trying to kill heroes, he is trying to kill legacies.  The crimes perpetrated in Justice Society of America are brutal and almost shocking when contrasted with the JSA’s squeaky clean image.  The Justice Society never stoops to their level and fights fairly, bravely, and with great strength.
The point of the JSA is that the older heroes train the younger heroes in skills and values when it comes to protecting and serving the people.  “We need better heroes,” is the manifesto that guides them.  The blue bloods are folks like Alan Scott (Green Lantern, but not in the way you would think) Jay Garrick (oldest Flash in the family) and Ted Grant (Wildcat…good at fighting, not so super).  These men make up the leadership of the JSA.  They are wily old veterans and are fun to read.  The younger team members are Doctor Mid-Nite, Liberty Belle, Hourman, Damage, Mister Terrific, Starman and others.  This lineup is great because it stays true to the original JSA formula from the 1940s.  Lesser known characters are really given their chance to shine.  It’s these characters that really make the book what it is.  The concepts behind all of them vary widely.  Doctor Mid-Nite is a blind “superhero doctor.”  He practices medicine on super people which is so cool and helpful!  Hourman takes drugs and it makes him super strong for an hour.  Again, very interesting and original.  Starman has been in and out of different universes and it has made him insane.  He lives in a mental institution and flies out to fight crime, but gets back to eat sloppy joes at the institution as the dinner bell rings.  These characters are given center stage in an environment where they are encouraged to be themselves.  No one could bring them to life like Geoff Johns.
Geoff Johns, now DC’s only exclusive powerhouse is like a virtual encyclopedia of DC knowledge.  He has his hands in nearly everything DC nowadays.  Even back in 2007, he found ways to utilize continuity and long forgotten concepts to weave together brilliant tales.  Geoff Johns “restores” concepts.  He finds ways to take what is there and make it fresh and exciting again.  Take Cyclone for instance.  Johns is trying to convey “family” with this book so he needs to introduce a young character stepping into their elder’s shoes.  Ma Hunkel was the original “Red Tornado” and was a housewife who fought crime.  Her Granddaughter, Maxine adopts the name Cyclone as an homage to her Grandma’s history and uses her wind manipulation as a member of the Justice Society.  It’s uncomplicated, creative story telling that helps to set the mood.  Geoff Johns’ dialogue is priceless and I find myself greatly amused everytime Starman babbles about something that was top secret to the DC universe in 2007, but is common knowledge now.  Johns is a continuity enthusiast and he makes sure that everything fits together perfectly.
I found the first four issue story arc of Justice Society of America to be entertaining.  I felt like Johns was in control of the story the whole time.  Eaglesham’s art is a bonus as the clean lines and colorfully inked costumed lend the book an air of professionalism.  The Justice Society of America doesn’t include Batman, Superman, or Wonderwoman as full time members, but that doesn’t take anything away from the charm and intrigue we see this family go through.  I always like comic books that put me in the mind of the character, but even after only four issues, I almost feel like family.  My wife bought a hermit crab and named it Liberty Belle for goodness sakes!
Anyways, this collection, also known as “The Next Age” is available at Instocktrades.com for only $9.29 and is well worth it.  As I always encourage you folks to do, try something new and Read On!
~ Scott Deaux ~
2011-08-22
Scott Deaux
Previous: Who Will Defeat The Monster Society of Evil?
Next: Big Announcement This Week For Dallas Comic Book Fans