American Vampire Bites Them Back

Thanks for checking Comical-Musings out and we wish you a beautiful day on Planet Earth.  It seems that since I have returned to comic book blogging, I’m on a much more independent streak.  Sure I didn’t like Hell Yeah, but that was a first issue and I wasn’t particularly scathing, but I have been all about the independent or smaller market / non DC or Marvel proper books.  American Vampire continues this trend with a great book about dang dirty vampires. 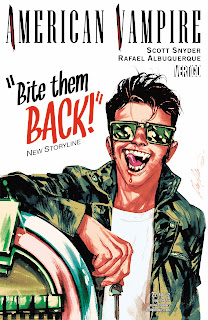 American Vampire is a beloved Vertigo series following vampires doing things that they don’t usually do.  I don’t mean that there is a lack of neck holes, teeth, or bats, what I’m saying is that they do different things.  For instance, the series begins in the old west and there are cowboy vampires.  We don’t typically see this era infested with the little blood suckers, but people were delighted in this world and due to Snyder’s love of genre books and history, he is able to capture the time period and present something that feels very real, save the inclusion of vampires.  The next move that Snyder takes is sending them to war.  This gives the readers World War 2 stories that uncharacteristically include vampires.  Snyder has imagined the evolution of the vampire species in his tales and creates a rich world with interesting characters and unexpected twists.
My experience with American Vampire is that I began to read it and then discovered that one vampire trope that is still present in the material is hypnotized women with sexual implications.  No matter how good the writing there is only one person in my life for which there are such implications and that is my wife.  I decided to stay clear of American Vampire until I heard about it’s latest chapter.
American Vampire was going to the 50’s with a “greaser” vampire hunter named Travis who was all set to break his foot off in the collective hind-parts of the vampire community.  Issue number twenty-two found us meeting Travis through a series of monologues and his character provided me with a great deal of intrigue.  The kid was human and vulnerable, well-spoken, very good at dispatching the un-dead, and instantly likable. It gives shades of a weird Arthur Fonzarelli and Van Helsing hybrid.  Gotta be honest, it had me at “hello.”  As a bonus, there was no nudity or sex featured in this story-arc and it was all very kinetic and supremely satisfying.  Skinner Sweet, the main vampire from the previous series is locked in a death race with Travis nearly the whole arc and although I wish that something with more impact (when you read it, you’ll know what I mean) would have happened by the end of the story, the end was well done.  Sure, I didn’t want to see Travis in the suicide mission scenario, but he enters the last panel of the book that he is featured in on his own terms; a rebel WITH a cause.  Does he die for it?  We may never know.
This series is a triumph of storytelling, scripting and art for both Scott Snyder and Rafael Albuquerque.  The character presented is cool and all of the set pieces fit the time-period and the genre.  The story progresses well and I truly hope that Travis made it out at the end and that we will see him featured later.  This series has not been collected yet, but can be purchased in issues at Mycomicshop.com for roughly $2.99 a piece.  It’s highly worth your time.
~Scott Deaux~
comic books scott snyder the fonz vampires 2012-04-10
Scott Deaux

Previous: My Take On The Comic Book Movies of 2011
Next: News About Kirkman That I Expected, But Was Also Surprised By