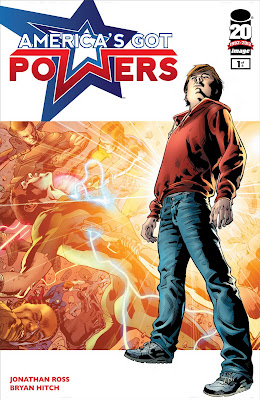 When I first heard the concept for this book I immediately thought “This is going to be Battle Royale/Hunger Games with super heroes” and I wasn’t thinking that in a complimentary manner. I have to admit that the first two issues have changed my mind. Don’t get me wrong this is a comic about teenagers forced in to a bloodsport and fighting for their lives for the amusement of the audience. It is a theme that has been done before and likely will be again. The theme isn’t new at all but that doesn’t mean that this take isn’t and therein lies the rub…

When I picked up this book I had no idea that Jonathon Ross was the same Jonathan Ross that I have enjoyed watching on various British TV shows, most notably Penn & Teller: Fool Us. It turns out that Ross has always been a huge comic book fan and this isn’t his first effort. Ross cut his teeth on Turf, illustrated by Tommy Lee Edwards and produced by Image. I haven’t read Turf yet but based on this book I think I am going to have to pick it up.

America’s Got Powers, as I said, is the story of a group of teenagers who had superpowers manifest mysteriously and have been rounded up and are being forced to compete against one another in an arena. While the title suggests a reality show with eliminations that’s not really what’s happening. It’s much more along the lines of the novels I mentioned earlier. All the elements are there: the public’s appetite for violence, an evil corporation in cahoots with the government but what makes this story is the personalities involved. So far it has revolved around a character who is in the compound with the other teens but appears to have no powers at all. Strange things happen when his brother is killed during one of the events and the story takes off from there. I can’t say a lot more without giving massive spoilers but suffice it to say that Ross took this theme, ran with, and has given us a very enjoyable book. 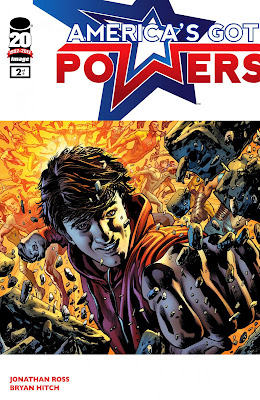 Now I haven’t mentioned the art yet because I wanted to make sure I gave Bryan Hitch’s efforts the attention they deserve. The art in this book is amazing! It is one of the best illustrated comics I have seen in a long time. His mastery of the comic format really brings Ross’s story together. The action scenes jump off the page at you and the details are painstakingly drawn. Hitch is no minimalist and he really appears to put his heart in to this book. Even if Ross’s story wasn’t as strong as it is I would probably still be reading this just for the art. I honestly haven’t read any of Hitch’s other work, like The Ultimates, and I think I really should. Ross’s story would have been great with a good artist but Hitch really takes it to another level. (If you have any Hitch reccomensations send them my way.)

If I haven’t convinced you to pick this one up yet then consider it’s a double length book for the price of a single length. You get twice the amazing art, twice the story all for the same cost as a normal book. Trust me, you won’t be disappointed. This is 6 issue run and we are two issues in. If aren’t already reading this then it’s time for you to catch up. I personally cannot wait for the third installment.

Previous: It Gets Better for Alan Scott
Next: Grim Leaper