Azzarello Puts The Waynes on Ice

Good day and welcome to Comical-Musings.  We are glad to have your readership and hope that you share our regularly updated content with all of those who’d care about it and some that might not.  We just finished The Week of Villainy and all of our Writer’s Blok writers are just a little tired from churning out many great articles.  Thus, it falls to me to crank something out for you before the month concludes and I was lucky to have found something to read that I would be compelled to write up.  Today’s offering is  Flashpoint: Batman – Knight of Vengeance.  This series takes shocking twists and turns and if you have not read it and wish to participate by taking in the story, DO NOT READ THIS REVIEW.  If you only have casual interest and wish to be a spectator, GO FOR IT. 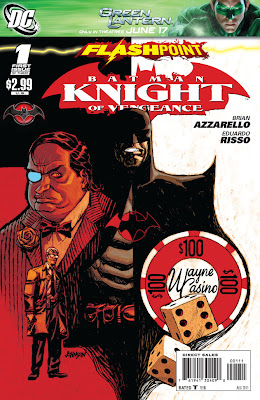 I decided one afternoon that I would attempt to read all of the Flashpoint issues that I had. This amounted to the main storyline issues 1-5, Wonder Woman and The Furies 1-3, Batman – Knight of Vengeance 1-3, and Grodd of War. It was my hope that by reading these titles, I could get a clear understanding of the Flashpoint story that transcended the things that I had learned from Ifanboy.com podcasts. The Flashpoint crossover was the main event that preceded The New 52 in the DC Comics Universe. Before The New 52, I was a casual reader of DC, but was re-invigorated by the new titles that sprung up from the ashes of Flashpoint. When I got back into the tabletop game, Heroclix, and pulled a couple of Flashpoint figurines, I figured that enough of my interests had run into each other and that the nexus was Flashpoint. As I read the main storyline from issue to issue, peppering in the Wonder Woman titles for a third dimension, I found an immersive world laid out before me. Aquaman and Wonder Woman, as representatives of their ancient cultures, have a falling out that plunges the world into war. In an attempt to hurt Atlantis and kill their royal family, the Amazons sink their hidden island and instead capture and occupy the English Isles. Aquaman sinks much of the rest of the continent in anger and we find a very desperate resistance fighting to stop an ever-escalating conflict. It is in this rich, backwards, sometimes upside down tale of the DC Universe that we find the story of Thomas Wayne.

In the historical Batman canon, the story has always read that Dr. Thomas and Martha Wayne had taken their son, Bruce to see a film about Zorro in a theater in Crime Alley. A mugger approaches them and when the robbery goes sour, “Joe Chill” (the mugger) enacts the vicious power that a handgun gives and makes Bruce Wayne an orphan. As Bruce grows, he is consumed with a desire to stop crime and prevent tragedies like his from happening again. That is the way the story has been told for decades, but in the Flashpoint universe, things are different.
When Barry Allen (The Flash, who is the somewhat impartial narrator from the regular timeline) awakes in the wrong timeline, he rushes to find the smartest man he knows, The Batman.  When Barry arrives, it is much to his surprise that the man in the familiar cowl is not Bruce, but Dr. Thomas Wayne.  In Thomas’ “Batcave” there are no giant pennies or dinosaur robots, but there is one single handgun behind glass.  Joe Chill’s weapon had destroyed his family.  Barry explains to Thomas that there is another world where Bruce lives and that is enough for Thomas to understand that he must do whatever is necessary to ensure that this world comes to pass.  That is where the Flashpoint main series puts us, but it is in the tortured story of Dr. Wayne that we find the truly emotionally gripping parts of the series.

In Knight of Vengeance, Dr. Wayne is driven to find the Joker and liberate Harvey Dent’s young son and daughter who have been kidnapped.  He scours the city and coordinates his search with Jim Gordon.  This is all relatively normal Batman fare and the only real differences are in Dr. Wayne’s casinos that he runs to attract crime, his gruff and broken manner, and his more violent tactics.  We see flashbacks of Thomas’ life and the emotions that losing a child can bring.  The Batman concept runs smoothly even in another world with different enemies and it is this commonplace behavior that lulls you into a false sense of security.  It feels like what you have always known, but unbeknownst to you, it is not.

Something fishy is afoot when Jim Gordon tracks the Joker to Wayne manor and moves to save Dent’s children. When Gordon bursts in, he finds a dark figure holding Harvey’s son at gunpoint.  He fires multiple rounds at the figure only to realize that he has just shot Harvey Dent’s young daughter dressed in a Joker-esque getup.  Horrified, Jim moves in to inspect his kill and instantly has his throat slit from behind.  He bleeds out and dies on the floor just as Batman arrives to find Martha Wayne, The Joker, very pleased with herself.  Through myriad flashbacks, we have seen Thomas descend into obsession with stopping crime.  It’s only now that we are aware that through the loss of Bruce, Martha has lost her mind.  It gets very creepy as the couple even shares a few brief intimate moments where Thomas explains to Martha that they might be able to bring about a world where Bruce lived.  The interactions that Azzarello writes are almost too human and as a father and a husband, it hits home.  I realize that as fantastical as the scenario is, these are real people struggling over something really devastating.  It is in this true to life depravity that Knight of Vengeance really shines.  They are broken people dealing with grief.  Like your uncle might drink to forget the loss of his wife or a soldier takes sleeping pills to drown out post-traumatic stress disorder, these characters are acting out their pain.  I get that.  In the climactic moments of the story, it ends as horribly as it began.  As Knight of Vengeance comes to a close, we see Thomas more resolved than ever to make sure that this world that has killed everyone that he cared about is no longer allowed to exist.  It serves to support and spur on the plot of Flashpoint and not distract from it. 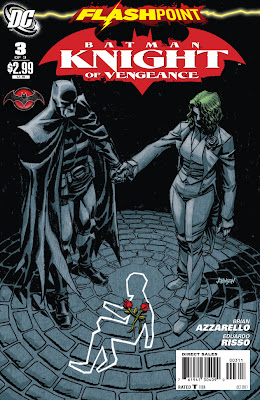 In it’s deeply engrossing story, it’s focus and support of the main Flashpoint story, and it’s emotionally gripping plot twist, I find Flashpoint: Batman – Knight of Vengeance to be successful.  You can purchase all three issues for about $10.50 on mycomicshop.com.  If you are a fan of the darker side of things, you might really enjoy it.

Previous: Made of Wood
Next: Reader Romance From Ben