Ahoy, me hardy’s.  Welcome aboard Comical Musings, we muse about comics.  As I’m sure you’re well aware, September 19 is internationally recognized as “Talk Like a Pirate Day,” and I hope yours has been resplendent.  I considered writing this entire post in pirate-speak, but it’s not “Blog Like a Pirate Day,” so you arrrrrrrrghhhh spared.
Remember back in 1992 when Superman was killed?  It was major news, and at the time everyone thought they could achieve permanent financial security by squirreling away a pristine issue of “The Death of Superman” (pictured at right) beneath their mattress.  Now then, do you also remember when Batman died back in 2008?  No?!  Don’t be ashamed, it was easy to miss.  It happened at the end of the Final Crisis crossover after Batman busted a cap in Darkseid. 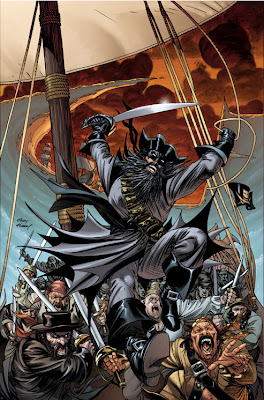 But, it has been demonstrated over and over that no one ever really dies in comic books.  Which brings us to today’s review:  Batman: The Return of Bruce Wayne.  Initially, I was reluctant to read this set because beyond a vague notion of the plot – Batman comes back from the dead… through time! – my only exposure to it was the cover of issue 3 (pictured at right).  I thought the whole series was contrived to put Batman in a pirate costume and cash in on the popularity of the Pirates of the Caribbean franchise.  And yet, shiver me timbers, it was actually a great story, and seemed almost tailored to my interests: DC, time-travel, Lovecraftian monsters, etc.
By the way, I’m not Scott.  I’m his brother Hal, resident science advisor to the Writer’s Blok.  I owe Scott a huge debt of gratitude for recognizing that this series was right up my alley and passing it along to me.  Overall, Batman: The Return of Bruce Wayne was very good, and I would recommend checking it out.  It turns out that Batman was never really killed by Darkseid’s omega beams; he was just sent back in time.  (So you can be further excused for missing Batman’s death, since it never really happened.)  As Batman shifts through different time periods and struggles with memory loss he must figure out why he wasn’t killed and leave clues that he is alive in the distant past.  This results in caveman-Batman, pilgrim-Batman, and cowboy-Batman, along with the obligatory cameo by Jonah Hex.  Disappointingly, Batman never really dresses up as a pirate, and while he is altering the past he never prevents the tragedy of Zebra-Batman.  Even so, the art was great, and adds to the notion of bouncing between different time periods.
The story was written by comic-veteran Grant Morrison.  It can be a little difficult to follow at times, but good time-travel stories are usually somewhat convoluted.  The important thing is that Morrison’s treatment of the story’s timeline is consistent.  It also clearly conveys the message that TIME-TRAVEL CAN HAVE CATACLYSMIC CONSEQUENCES.  So, even with the appearance of Booster Gold, the subject of time-travel was approached in an appropriately serious manner.  Costume shenanigans aside, there are definitely more ridiculous ways to bring popular characters back from the dead, just ask Franken-Castle.
~ Hal ~
Batman DC Comics Time Travel 2011-09-19
Hal

Previous: What In The World Is A Ghost Box?
Next: The Authority