With the upcoming release of Marvel Studios’ major motion picture event, Captain America, I thought that Comical-Musings should pay homage to the character.  The thing that you, as a comic book fan, need to remember is that it is important that you go see Captain America.  Movie studios judge whether or not to make comic book movies on how many people come out to see them ESPECIALLY in the first weekend.  I went and saw Ghost Rider because I want the studios to make an “Invincible” movie…not because Nick Cage is my favorite actor.  When it comes to paying himage to Captain America, no one could do that better than our Writer’s Blok writer, Cap!  So look for his review of his favorite Captain America book to drop on the actual release date, July 22nd.  I, however, am interested in gathering and building upon knowledge in all areas of comic books, so I figured that I could read a five part mini-series and slap a review on a few days beforehand to get people excited.  The five part mini-series that I read was Captain America: Hail Hydra. 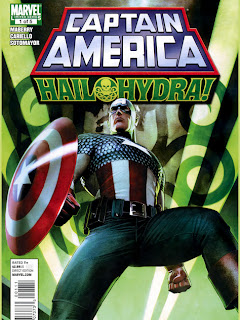 I had heard about and seen a sample of this series in a comic book previews magazine months and months ago.  The preview had a really clean and classic art style and featured Cap just beating the unholy stuffing out of Nazis.  I thought that the art was enough to interest me, so I set about reading the issues and found that it was not entirely what I had expected.  There were two surprises in store for me.  One good and one bad.
The good was that this story featured Cap as the main character, but the plot revolved around the organization Hydra.  Hydra is an evil terrorist group with international ties and much of the story is spent showing them slowly accruing various fountain of youth and immortality elixirs over the ages.  This means that you get a view of Hydra operating in the Spanish Inquisition or Nazi Germany or Mesopotamia in 2671.  The whole time, they are striving to cheat death and achieve godhood while Captain America and various other heroes punch them.  These little vignettes into history are really entertaining and drive the story.  I could feel the weight and power that Hydra has possessed for their years of troublemaking in comics.  They don’t look like stupid lackeys for once.  I finally felt danger from a character that up until now was kind of boring.  That was good.
The bad was that there were multiple artists in five books.  They were trying to be clever, but it seemed that whenever I started to enjoy an art style, it changed and that is annoying.  There was cartoony art, sloppy art, old school art, and a little of that aforementioned “good” art.  The art gymnastics was truly the Achilles’ heel of the series. 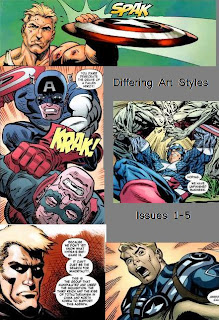 Hail Hydra had a good start, an interesting middle, and an awkward end.  The images of Captain America’s enemies running helter skelter through time and creating super elitists that are so disgusting that they are bigger than Nazism, are a sight to behold.  We see these arrogant and close-minded scientists and sorcerers trying to bring about something evil and unstoppable.  It’s pleasurable to give the good Captain something that is that worthy of being hit.