Contest Results: The Viking has Landed

Well, we’ve crossed the rainbow bridge into the realm of 100 views on our contest, and a champion has emerged into the sweet Valhalla of winning a trivia contest on a blog about comic books.  The task was to identify which one of the following statements is false: 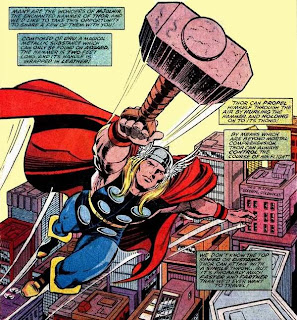 Obviously, the first one is false because the wings on Thor’s helmet do flap… Oh, wait, no.  That’s just Thor’s soft, luxurious hair fluttering in the Nordic breeze.  Nevertheless, I completely made up the first answer.  Thor doesn’t rely on external equipment for his powers (…except his hammer, …and his belt of strength, …oh, and his chariot, but other than that…)

The second is true.  I guess we can assume that Mjölnir is magic so it is exempt from Newton’s laws.  Let this be a lesson to you, dear reader, nine times out of ten when the question is about Thor, the answer is Mjölnir.  How does Donald Blake turn into Thor?  Mjölnir.  How does Thor fly?  Mjölnir. How did Thor earn a lifetime ban from ever playing Whack-A-Mole?  Mjölnir.  (Note from the editor: HAHAHAHA)

The third is also a fact, whose epicness is only matched by its under-utilization in comics.  Marvel may not have accurately incorporated every aspect of Norse mythology, but thankfully they saw fit to include the fact that Thor occasionally rides in a chariot pulled by two giant “war goats” named “Toothgnasher” and “Toothgrinder.”  According to Norse legend Thor kills and eats his goats daily, and then he uses Mjölnir to bring them back to life.  (How does Thor resurrect his goats?…)  Apparently Marvel chose not to include this detail because they didn’t want the intergalactic goat-chariot to get weird.

Congratulations to Ben, who not only identified the fabrication, but also shamelessly promoted the contest, eventually getting Mad Hao Guru to enter as well.  Well done!

Thank you to everyone who entered.  Check back with us regularly for future contests and further adventures into the realm comic-lore.  Until next time, may you be as mirthful as Volstagg.

Previous: The Not-So Secret Avengers
Next: Welcome To The Week Of Villainy!