Welcome to Comical-Musings.  We have successfully ended the month of July and are incredibly happy to have had this month of Independents go so well.  The main point of Comical-Musings is to excite and intrigue new readers into choosing to read comics over sitting for 15 hours on Farmville.  The comics industry is suffering and so we, as The Writer’s Blok, constantly seek to entice noobs into readership.  The way that we often do that is to highlight older series available in collected editions, often for discounted prices.  This model that we have chosen for our blog often keeps us off of the cutting edge of comics news, but if we are honest with ourselves, “news” when it comes to comics is all just about movies and TV shows nowadays.  I’m kind of saddened that everything I hear out of Comic Con has been about mediums other than COMIC BOOKS, but anyways.  In an effort to address the topics of today, I am writing you a review of Cowboys and Aliens. 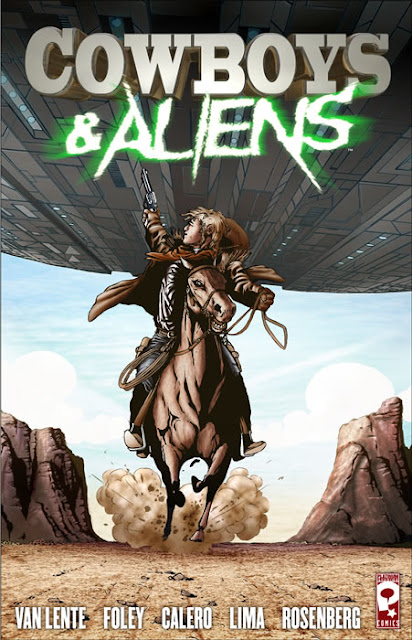 The concept for this work seems silly.  When I first saw the trailer for the movie, I thought that it looked ridiculous.  “What the heck does that mean?!” I found myself thinking.  Well, it’s cowboys and aliens.  As in aliens invading the old west in 1873.  It is an interesting thought and really somewhat of a period piece.  I wasn’t terribly surprised to find that it was a comic book before it was made into a movie.  In this graphic novel, we find what happens when two genres of movies intersect?  Well, spoiler alert, it’s kind of weird.
The comic book is written by Fred Van Lente and Andrew Foley and is a very bold undertaking.  Part sci-fi, part western is hard to pull off.  I would say that they did ok.  As I flipped the pages, I found the story active and moving, but never really got engrossed.  Lots of things happened, but nothing that grabbed me by the eyeballs and compelled me to read more.  Cowboys and Aliens itself is only about 115 pages and I can honestly say that I got tired of reading it about 60 pages in, took a break, and then finished it.  Ultimately I don’t feel like I wasted my time, but I feel it may have been spent better elsewhere.  It was not really on par with what many of the mainstream comic companies put out although highly imaginative.
All of these things said, I really fear for the quality of the movie.  When I saw the trailer the second time, I thought “I have to go see that movie!”  When I found out my good friend Shelton went and saw Cowboys and Aliens, I got him to discuss what similarities could be found between the comic and the motion picture and I’m sad to say that what I discovered was a real bummer.
The only things that I really enjoyed in Cowboys and Aliens was when the wild west people got their hands on alien technology and crudely implemented it.  It was campy, a little ridiculous, and overall awesome.  We had Native Americans tying tubes of undefined goo to arrows just because they knew it blew up.  We had Warhawk stealing an alien’s goggles and then wearing them to find weaknesses.  We had Zeke’s weapon that he used being a simple welding tool that he weapon-ized.  We had, in the penultimate scene in the graphic novel, the town blacksmith making horseshoes out of the floating metal used to power the alien speeders.  That’s right kiddies, Native Americans mounted on flying horses.  It got a little crazy and intense and I liked that, but I am told most of that never made it into the film.  That is a shame.  Cheesy lines and goofy concepts were the most enjoyable parts of this work and it sounds like Jon Favreau stripped them away for artistic integrity.  Um….who needs artistic integrity in a movie called Cowboys and Aliens? 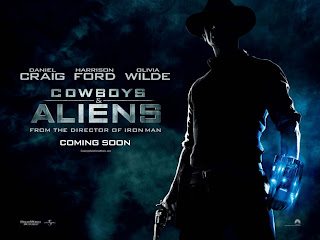 All in all, for a comic to have been published by an independent publisher like Platinum Studios, in a time period that was dry for comics like 2006, and for it to have ended up being a movie with Harrison Ford, Daniel Craig, and Olivia Wilde it is still a win for the industry.  In a way, the folks over at Universal Studios did what we try to do at Comical-Musings.  I spotlight Cowboys and Aliens for you today because there is a fun comic book that is the reason that the movie was made and I feel like you should know that.  They took an old concept and brought it to the forefront for your entertainment.  That seems like a great idea and one that I can support heavily, but I fear that something more sinister is occurring beneath the surface.  These days, movie companies feel content to raid old comic stories and change everything around with them.  The new writers are out of fresh ideas (please refer to Friends With Benefits and No Strings Attached which are actually the same movie) and so they rape old comics’ stories and pillage them for plot.  If we support behavior like this, we will end up with X-men movies where teams that don’t work well together, but “look cool” are championed.  If we support behavior like this, we will get more excrement on celluloid than we could possibly believe while our favorite industry dies.  If we support behavior like this, than we could watch great comics authors hang up their creativity to become subpar movie makers for money.  I guess what I’m trying to say is that maybe flying horses weren’t the direction taken by Jon Favreau, but maybe they should have been. 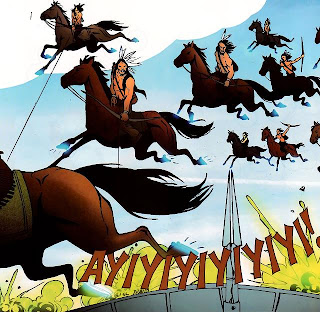