Does The Shadowpact Fall Flat?

I would like to take the time to welcome you to Comical-Musings… “Welcome to Comical-Musings my friends!”  We like to think of ourselves as a website that provides information to new readers on older stories that are still good reads.  We take what we have found to be interesting and share it with you in the hopes that you will take interest and purchase the recommended material through Amazon.com or Instocktrades.com or Barnes and Noble or Graphicly.com.  If you do this, then we can save the comic book industry together, or at least that’s our hope.  Many times, the information provided to you comes in a review.  Today we are looking at an oft-forgotten, but surprisingly good story-arc of The Shadowpact.

In 2006, trouble was abrewin’ in the magical/spiritual world of the DC Universe.  Something evil had a hold of The Spectre (God’s right hand of judgement) and he was going nuts and destroying everything.  Something had to be done.  A team was formed from the magical forces of the realm to combat this Day of Vengeance and thus the Shadowpact was birthed.  The characters on this team are fascinating, but subtle and rarely seen in the DC Universe. 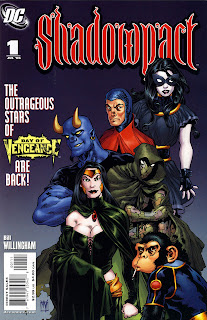 The Phantom Stranger is the elder magical presence who commissions the Shadowpact to deal with the problem at hand.  In charge of the rag-tag bunch of heroes is Nightmaster.  Although not super recognizable to mainstream fans, he has wielded the Sword of Night for years alongside Swamp Thing.  He is an excellent swordsman and the fact that his blade generates fire is helpful.  Next, we have Blue Devil.  He was a movie stuntman who sold his soul to the actual Devil for success and was transformed into a demon.  He decides to fight evil to spite Satan.  That brings us to Ragman.  Ragman is a powerful crime-fighter whose cape is made from pieces of his enemies’ souls.  Weird, but effective.  Nightshade is a girl who can control shadows; think magic Green Lantern with shadows.  Enchantress considers herself the most powerful witch in the DC Universe and finally, my favorite, Detective Chimp.  Detective chimp is a seemingly ageless monkey sleuth with chimpanzee strength and addictions to alcohol and “smokes.”  That is the Shadowpact and they are the somewhat unlikely heroes of our story.  It might be unbelievable to consider them a formidable team except one thing…great storytelling.

You see, that is where this book excels.  That’s right, I don’t care about magic superheroes one minuscule iota, but this book is written so well that it kidnapped me.  The writing takes the book from interesting to enthralling.  I’m going to spoil this one, so if you want to be surprised when you read it, you probably should come back to this review later.  The story opens with a red dome over a city in Wyoming.  Superman sees it, but cannot get through it.  He calls in Green Lantern to analyze it.  He is equally useless.  By taking the time to put two of the most, if not the most, powerful heroes on the scene and show them powerless against the dome, Bill Willingham is reinforcing the power of the villains involved.  It really makes me think of the SAW 4 commercial where it builds suspense by showing doctors pulling a cassette tape out of a cadaver with the words “What’s on that tape?!”  Willingham builds mystery to where you are asking yourself “what’s in that bubble?”  When you find out what is going on, it shocks you.

There is a team of relatively unknown mystic villains, called the Pentacle, that has decided to commit “a significant act of necromancy,” in the small town of Riverrock.  They are pulling names, lottery style, to decide who will fill their sacrificial quota for the spell that they are trying to pull off.  They calmly inform the townspeople that there is no escape and that they only need a few hundred lives, so most of the town will survive.  The danger is that if someone refuses or acts up, the Pentacle sacrifices that person, their friends, and their family first.  The Pentacle quietly escorts the townspeople home and begins to set up the “murder hole,” for the year-long process of sacrificing the town.  It’s eerie how smoothly their plan comes to fruition. 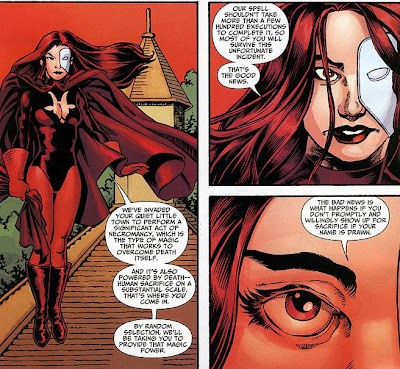 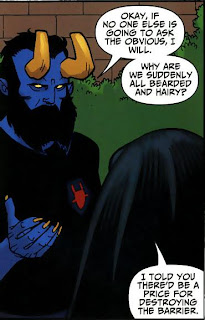 Enter our heroes who suddenly look a little more “super.”  By reinforcing the terrifying nature of the Pentacle, Willingham builds the credibility of the Shadowpact.  They enter the bubble and begin to fight evil.  By the end of their first round of fighting with the Pentacle, the Shadowpact finds themselves hopelessly imprisoned.  This makes the story more viable as they are a new team and realistically might struggle.  There is a traitor in the Pentacle and soon our heroes are free to save the world.  A few fights and issues later, the story is wrapped up in a tight little package.  To bring the prison-like ruby dome down, Enchantress has to advance time inside the bubble one year.  When the Shadowpact has escaped, they all find that they have giant beards and laugh about how mad their landlords must be.

This comic was fantastic; a true anomaly.  Bill Willingham took what I would normally think to be a failed idea and captivated me with it.  He writes and pencils the whole story with great quality.  The Pentacle was scary, the Shadowpact was endearing, and the story was well-paced.  Typically, DC books struggle without the inclusion of a batarang, a lantern, or a well placed “s.”  With Shadowpact, this was not the case.  Superman was featured, but it was more his inadequacy on display.  I have never much cared about magic characters except Shazam when Ed McGuinness draws him, but this was one of my favorite stories that I have read in the 2011.  It had an amazing start and an abrupt, but ultimately cute ending.  You can find this story-arc collected into a tradepaperback at Instocktrades for only $9.29!  My only regret with this comic is that after a brief search of Wikipedia, I find that the villain White Rabbit is not featured again in DC Comics after this.  I liked him.  Read On! 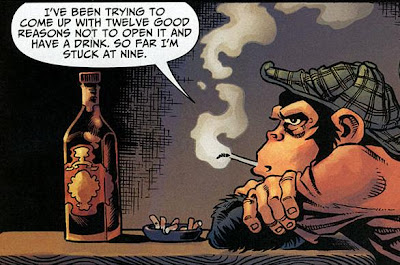 2011-08-16
Scott Deaux
Previous: The Results of Our Poll!
Next: Thoughts for a Thursday