Enemy Of The State

I tend to prefer comics that read like a book (perhaps because… I love books), so when I was
unexpectedly presented with this comic about Wolverine, I was a bit taken aback. The only things I knew about Wolverine were from the X-Men movies, and therefore somewhat debatable. But, having been reassured that this was excellent, I sat down to read it…. and didn’t move for the next 90 minutes. 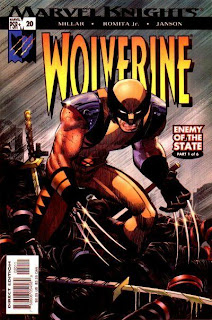 Enemy of the State opens in Japan-yes, Japan, that little island Wolverine loves and hates. He’s called there by a family member’s plea for help in finding the man and his wife’s kidnapped son. Two pages in, you’re riveted. The characters are subtle-none of their nuances are lost. I felt like I was watching a movie while I was reading. The plotline has so many twists that just when you think you know what’s about to happen, you’re glad to be wrong. The artwork is shadowed and intense, with the darkness doing more to highlight a scene than to hide it. The characters reflect this darkness. Even in the scenes where, you know, people aren’t dying in awful ways, the word happy never comes to mind. These are not happy people, and this is not a happy comic, but it draws you in until you’re turning the last page and looking for more to read, and then you come up for air looking around for someone to hug because you aren’t alone!

I consider myself a positive person, which is why it surprised me that much more when I realized the day after my initial read that I liked this comic a whole lot. You see Wolverine at his finest, animal best-a man without a home or family transformed into a mindless, brutal machine-and then, when he’s rehabilitated and let out around people again, he willingly goes back into this mode, as a type of penance for the friends who were hurt because of him, as well as the evil he committed while under the control of the Hand. His lack of relationship with other people is both his strength and his weakness. Wolverine literally murders thousands of people, who never personally wronged him, in cold blood and in horrifying ways. Always the antihero, in these comics Wolverine becomes both hero and villain. He carries the story by himself, even if there wasn’t an awesome cast to round out the plotline. I never caught myself thinking, “Oh, come on. Nobody would do that.” Instead my thoughts were more along the lines of, “Yeah… I get it.” While there are other, infinitely wickeder villains populating the pages of this series, they manage to escape the toll of their actions. Only Wolverine, standing alone at the edge of a world that does not want him, is made to pay the full price of his sins. While he was brutalized, brainwashed, and mindless, he fought back, even when he couldn’t help what he was doing. But after he regains the humanity he fought for, and then willingly, knowingly throws it off to become that beast again. Wolverine spits in the teeth of everyone who tried to save him. Some might say that Wolverine redeemed himself of atrocities he commits. I am not one of those people. 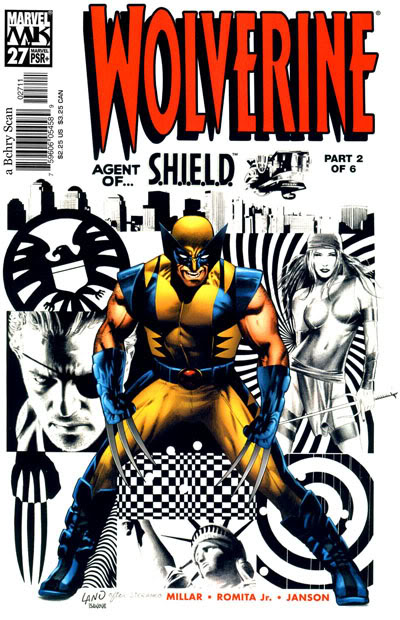 Without giving too much away, if you like A. ninjas, B. Hydra, and other secret organizations, C. The Struggle Between Good and Evil (dum dum DUMMMM), or D. all that PLUS excellent action sequences,  run out to your local comic book shop! Know that this is not the easiest series to find, so buy it while you can, and thank your comic merchants for still carrying it. And smile, because you aren’t alone.

Note The Editor:  If you want to read Enemy Of The State, it is available for $19.99 digitally on Marvel.com
Enemy of The State marvel Ninjas The Week Of Villainy villains Wolverine 2012-06-22
Shiera Carter

Tagged with: Enemy of The State marvel Ninjas The Week Of Villainy villains Wolverine

Previous: An Intimate Portrait of Mr. Zsasz
Next: Made of Wood

Hiraeth – The Comic You Didn’t Know You Needed