Even Hawkeye Has a Blindspot 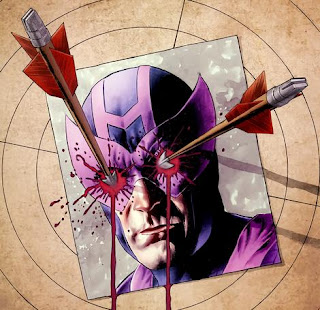 Welcome to Comical-Musings for our last post of The Month of Hawkeye!  We did it!  A whole month of Hawkeye.  The comic book that owns our final review is the most current of all of the books that we have reviewed/spotlighted.  Blindspot is the latest offering from Jim McCann and if his books end up being a trilogy, it is the last.  I was lost on Hawkeye and Mockingbird, I was renewed on Widowmaker, and I feasted on Blindspot.

Blindspot is a story that focuses around Clint Barton struggling.  Near the beginning of this feature, it is revealed that Clint had received a blow to the head in Widowmaker that had caused a swelling on his brain.  This swelling is causing Hawkeye to go blind.  Iron Man and Doctor Blake (Thor) make him technology to compensate for this malady.  Since this is the worst possible thing to happen to a sharpshooter, it causes Hawkeye to reflect back on his childhood.  We see Papa Barton beating him and his older brother Barney as children.  They end up in a home and ultimately on the streets together.  Clint and Barney get involved with a carnival.  Clint is trained by Trickshot in the arts of archery, but his life changes one fateful evening.  The carnival is raided by mobsters and Clint finds that Barney and Trickshot are running with them.  After that extreme betrayal, Clint stays morally upright and continues his work at the carnival until, one day, he is inspired by Iron Man to join the Avengers.  All of these flashbacks set the scene for an awkward coming of age story in the present day.  The climax of the story is when Clint finds himself bested by his resurrected brother, Barney who has taken on the moniker of Trickshot.  We find out that Baron Zemo, enraged at Hawkeye’s perceived past “sins” of letting his woman, Moonstone, die, had enlisted the now dead Trickshot to train Barney into some kind of “evil Hawkeye.” 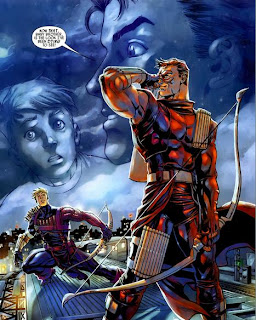 Barney is hell-bent on killing Hawkeye and right in the thick of the fight, Clint’s eyesight goes.  He has to do the huge final boss battle blind.  It is a very engaging moment for us as readers.  In the end, Zemo escapes and Barney is still nuts, but good wins out over evil.  The Avengers take bone marrow from Barney and fix Clint’s eyesight with it.  Hawkeye is back to normal!  That is the rundown of a story that stretches across four issues.
I did say that I liked it, didn’t I?  Something about the way that this comic was written got me more into the masculine idea of Hawkeye.  Maybe the fact that McCann didn’t have a heroine to cling to allowed his writing to soar.  The little inflections that McCann adds in are very smartly conceived and well executed.  “I wonder if this is what Daredevil does everyday,” Hawkeye thinks as he tries to picture the room by sounds in his blindness.  It’s very insightful.

Also, the absence of “spy stuff” made this a Hero versus Villain story.  That was nice for a change.  No motives being questioned, just good versus evil and boy, was Barney evil?!  He was just consumed with killing his brother.  I thought McCann nailed that intensity tension that comes from brother to brother conflict.
I also adored Dr. Donald Blake in this comic.  He shares a body and consciousness with Thor, god of thunder, but when he is not in Thor-mode, he is a legitimate doctor.  Why don’t they do this in the Avengers books all of the time?!  It is an awesome idea that when Thor isn’t exploding rock trolls with lightning, Dr. Blake is patching up hurt Avengers.  It makes perfect sense.  I absolutely loved the fact that Dr. Blake didn’t even speak with “thee’s and thou’s and verily’s” like Thor does.  It was just a really intelligent take on the character.
I really liked Blindspot and all that came with it.  It was simple to connect with the back-story.  The art, by Paco Diaz, is well done and really shines in combat situations. 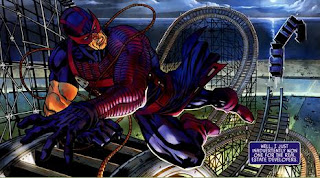 As I have already said, Jim McCann’s story crafting really shines in this book.  He may be an established writer, but he is still up and coming.  Everything new thing he writes is better and I’m sure that we haven’t come close to discovering his ceiling.  I kind of hope that this is the last in the trilogy because I think that it has a perfectly clear-cut ending for something else to begin.  It feels like the “Empire Strikes Back” of the trilogy and is the meatiest of the three.  Don’t get me wrong, if Marvel keeps feeding Jim McCann four issue Hawkeye minis, I will still read them.  I just feel like if they wanted to go out, this would be a strong point.

Previous: The Rise of The Writer’s Blok
Next: Top 5 Overpowered Heroes