For Those Times When Regular Avengers Won’t Do…

The comics industry is filled with, dominated by, and mostly made for adults.  Sex titillates readers, violence engages readers, and crude humor entertains readers, but what if I were to tell you that today I read a perfectly legitimate comic book with none of those things in it?  What if I were to tell you that Chris Eliopoulos and Ig Guara created a comic book that still delighted me, even with great experience in the medium.  The best part of this comic book is that I could turn around and give the collected volume of Lockjaw and The Pet Avengers to a young person with zero remorse on my part.  The term “all ages” is hard to find these days, but this one is worth a read to young and old readers alike. 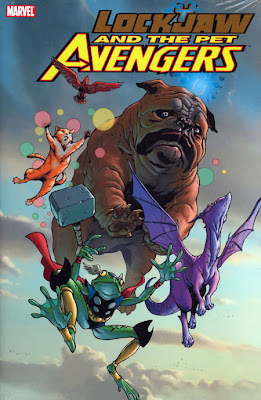 The idea of the book seemed ridiculous and as I read the description, I couldn’t help myself from chuckling.  A group of pets come into contact with the Infinity Gems and unite for such a time as this to collect the rest of them as a solemn quest.  Yes, I said “pets” and Infinity Gems in the same sentence.  Longtime fans of the blog might remember the last time that we highlighted an Infinity Gem – fueled romp through the Marvel universe.  As it often goes, things got messy quick.  This time, however, we saw an adventure with animals trekking through the corners of the world to find the gems and unite them.  As the story progresses it ends up having a Homeward Bound feel to it.  Each animal on the Pet Avengers has it’s own personality and skillset to bring to the table and their interactions are fun to watch.

The strength of the series to me is that it takes itself seriously as a real Marvel in continuity tale.  Even at the end, it’s identified that other humans can’t hear them speak to each other and that they are not overpowered beings by any means.  They are just Pet Avengers having their own adventure in their own corner of Marvel’s universe.  It’s enjoyable and fun to read.

The break out character of the book is Ms. Lion, a male terrier.  He provides many sight gags and gives us an everyman on the team to help ground it.  I’m making a big point to reinforce the fact that Lockjaw and The Pet Avengers is as realistic as anything in comics, but you have to remember that Ms Lion’s teammates are not normal.  They are a group of heroic pets that feature Lockheed, an alien dragon and peer of the X-Men and others of his caliber.  Frog Thor is a whole ‘nother bag of awesome that will probably have a post dedicated to him at some point.  Ms. Lion gives us street level eyes to see through and is written very well both with comedy and honesty.

Lockjaw and The Pet Avengers is a good series to buy as a present for any kid that you know that is even slightly knowledgeable about Marvel comics, but could even interest an old fan.  There is humor throughout and a few heartwarming moments to be found.  You can purchase vol. 1 in hardcover at Instocktrades.com for $14.99.

Tagged with: Eliopoulos Lockjaw and The Pet Avengers

Previous: Dial H For Homosexual
Next: Moon Knight In The Moon Light or White Batman