Good morrow to you sirs and madams.  You know what site this is as you clicked on it and I’m sure that you are also aware of the fact that Comical-Musings is your resource for good suggestions and reviews of comics past and present.  We pride ourselves on our ability to steer folks to “good” comics.  One of my sources that I read and listen to constantly is the Ifanboy.com website and Pick of The Week Podcast.  The content put out by Josh, Ron, Conor, and all of the other staffers makes my week and entertains me endlessly.  They made me want to make this blog and I love them for it.  It only makes sense that when I, your source for suggestions, need a suggestion on what to read, I consult a higher power and Ifanboy.com is that for me.  The book that all of the guys rave about constantly is Grant Morrison’s JLA.  On any given episode of the podcast, you will hear the Fanboys give credit to this run of comics for either catching their attention or re-igniting it.  Either way, Morrison’s run on JLA is legendary and I had to give it a read.  I started with issues one through four and dove right in. 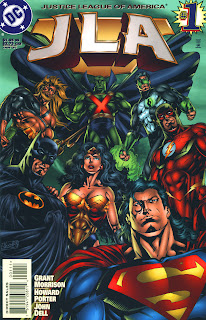 Grant Morrison’s JLA is considered a classic, but at the time (1997), it was groundbreaking.  The plot is very different than many comic books of the day and it put the JLA in an almost adversarial position with the people of Earth.  This was a new concept and is a little bit startling when you see comic book characters drawn like they were at the height of their popularity with crowds booing them.  The torture scenes were gritty, the action was done like a movie, and the overall feeling that you find yourself left with is that this is something special.  The art is good, the plot is good, the pacing is good, but what sets this story apart from many others in the modern era is that everything is good.  You may think it’s a perfect book or you may not, but it would be hard to make any sort of argument that it is not good. 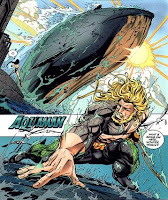 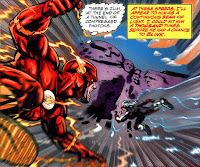 Case in point, this comic made me like characters that I have never cared about one bit.  Metamorpho is a hero and stretches his powers farther than he ever thought they could go and to the extremes of what I had imagined.  Aquaman tears people up in this comic book.  He tries to stab Wonder Woman because she won’t leave him alone and throws whales at people.  They make him cool and that is not nearly as impressive as what they did with Mr. Allen.  Through years of speed force stories and multiple family lines it seems like the Flash’s only goal is to make me never buy one of his comic books.  He runs fast, but gets beat by stupid villains and as soon as he dies, his next son takes over.  It’s kind of antiquated and played out.  In Morrison’s JLA, the Flash has probably the best battle sequence of the whole book.  He chases another speedster and the speedster begins to employ high speed combat techniques.  The Flash has to figure out ways around this and his thoughts are fleshed out with skill.  You feel like you are moving at high speeds with the combatants.  It’s really exciting and well done.  Finally, Batman’s role in this book is the catalyst to the climax and really fits with his character.  I know Batman is an A-list character, but I like how this book highlights Batman as opposed to losing him in the background of a team filled with god-like personalities.

The excitement in this book is very much due to how well paced everything is.  You rarely find yourself thinking ahead of the story or behind on what’s going on.  Morrison’s JLA keeps you firmly on the edge of your seat.  The pacing is probably what brings the whole composition from goodness to greatness for me.
Morrison’s JLA was an anomaly at the time, but now it is a historical piece on how to make good comics in the modern age.  If you doubt this, the fact that is still considered good despite dated haircuts and costumes should be proof enough.  I am typically ageist with the medium and don’t like comic books before the 2000s, but even I liked Morrison’s JLA.  Thanks to the Ifanboys for a good read.  If you want to check this comic out and see what I am talking about, go pick it up on Amazon.com for as little as $5.50.  Also if you purchase it through our link, Ifanboy gets a little money back too.  Sweet deal for everyone!  Until next time…
~ Scott Deaux ~
2011-09-25
Scott Deaux
Previous: Skullkickers
Next: Top 5 Worst Hair Cuts In Comic Books