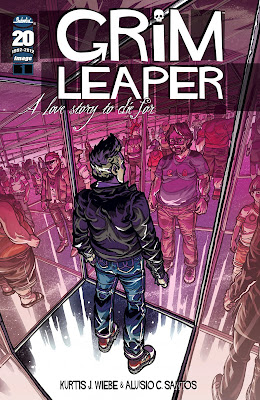 These days I am pretty sure that Image is my favorite comic book publisher. This month they gave me yet another new book that I really, really like! Grim Leaper is a twisted, dark, funny, and visceral love story (maybe) written by Kurtis J. Wiebe, who apparently has the best timing in the world when it comes to writing a book like this. There’s really nothing to compare this one to as the concept is, as far as I can tell, pretty darn original. We are introduced to Lou Collins, though not by name yet, at a funeral which turns out to be his own. Wiebe gives us a little nod to Wedding Crashers and by having Lou try to pick up a chick at his own funeral, then walks him out of the funeral and decapitates him on page 7! What a way to start a comic.

Long story short Lou gets killed pretty much every day only to wake up in a new and different body belonging to someone else in his hometown. This poor slob has no idea why or how this is happening, he doesn’t know what happens to the people he takes over. There’s no rhyme or reason and to be honest it’s pretty bleak but somehow Wiebe manages to insert a snarky humor in to the narrative that really makes this a choice book. I can’t believe that I am going to say this but Wiebe manages to take a fairly gory and dark book and makes it fun! I was amused from the point I figured out what was going on until the end of the book. Oh yeah and for good measure Weibe tosses in a love interest in the final pages. What’s not to love? 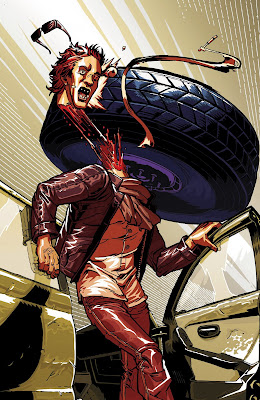 Aluisio Santos is the one responsible for the smirks and gouting blood and does a marvelous job of it. Choosing a style that isn’t really all that dark and almost feels cartoon-ish, Santos carries this book in the quirky fun vibe that Wiebe creates in the dialogue. This pairing, Wiebe and Santos, really works well for this book. I wasn’t aware you could make a grisly depressing story in to a whimsical read but somehow that’s what these guys do. I almost felt like I was reading a John Hughes story if Hughes had written his quintessential films as a team effort with Quentin Tarantino. In short I loved it. If you like your love stories with a little bit of gore on the side then you should add this four issue mini-series to your pull list immediately!

Previous: America’s Got Powers
Next: The Tick Turns 100 And Meets Invincible