Welcome back to Comical-Musings!  I am always appreciative when you take the time to read my ramblings.  I am so excited that “The Month of Hawkeye” is in full swing.  I feel that by the time the month is over, we will have effectively payed homage to one of Stan Lee’s most beloved creations.  Hawkeye has been through so many different things in his life.  He has been married, he has been the leader of the West Coast Avengers, he has even died and come back from death.  It is this enigmatic character that we gladly bestow most of the posts in June to. 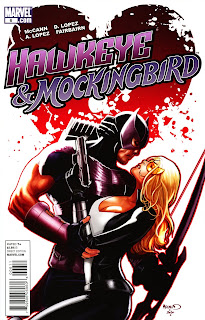 It seems fitting to start with a current Hawkeye story as we need to take a look at where the character is now.  Jim McCann’s Hawkeye and Mockingbird series is very recent and critically acclaimed.  It is a Heroic Age story, which basically means that Marvel decided to be back in the business of having real “Super Heroes” in their comic books.  There are over the top action moments and tons of allusion to the earlier days of comics including a plot that centers around Crossfire, the first villain that Hawkeye ever fought and the Phantom Rider, the wild west/seminal version of Ghost Rider.  We find Bobbi Morse, aka Mockingbird, as the main protagonist in almost the entire 6-part series.  The beautiful thing about the attention paid to Mockingbird is that her trials and tribulations really bring out and frame Clint Barton, aka Hawkeye, as the man he is.  He is a strong leader, a stand up guy, a caring friend, and a compassionate lover.  We see this echoed in the way that he takes care of Bobbi, his wife/girlfriend, and in the interactions with Captain America.
This story has a lot of “spy stuff,” as Bobbi and Clint are in the business, but never enough to overwhelm or bore me.  Mockingbird is an ex-super spy from S.H.I.E.L.D. who erased herself from the lives of her family.  She was Nick Fury’s right hand gal until she “died.”  We have found out just recently that this death was really just imprisonment by the Skrulls and when Secret Invasion occurred, she resurfaces alive and free.  She and Hawkeye (someone who knows a thing or two about dying) immediately rekindle their romance from before their separation. 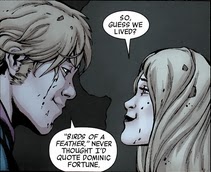 These two lovebirds were made for each other.  They must have entered this world with eighteen lives (nine lives times two for those not paying attention) between the two of them and can’t seem to stop using them up.  They are both adventure seekers and really enjoy the thrill of the chase.  We see this in the first big, beautiful panel in issue one whilst they fight with motorcycle “bad guys.”  Arrows and bullets fly as they take down these antagonists with non-lethal force.  The two of them are really into that, Hawkeye especially.  They are just racing around in a sports car together laughing and fighting.  It’s almost carefree.
The story kicks off with the evil Phantom Rider spirit taking over Jaime, the daughter of the current Phantom Rider.  The evil Phantom Rider allies herself with Crossfire, basically a generic “gun” villain and the two of them are off to the races.  They manage to create all hell for Mockingbird and nearly fatally wound her mother.  The rest of the story is spent fighting these villains and getting revenge by banishing the evil Phantom Rider spirit and capturing Crossfire.
There are not many scenes in this book that I would say are particularly memorable.  It all just blurs into a sort of action, spy, romantic comedy…think Ocean’s Eleven meet James Bond.  There are, however, two striking scenes that stand out from the mediocrity.  The first is the scene where Hawkeye visits the Raft, a super-powered prison.
In a moment of passionate anger in the final battle, the typically pacifistic Hawkeye, pulled Crossfire’s robotic eye out.  After this epic skirmish has subsided, Hawkeye decides that he has to leave Mockingbird’s spy team.  I loved how he just changed the game by violating his principles and then left the woman that had compromised his principles.  Then he HAD to visit Crossfire in prison.  He HAD to look at what he had done and face up to his mistake.  Crossfire doesn’t make it easy on him either as he really messes with Hawkeye’s mind.  The way that Crossfire breathes on the glass at the conclusion of Hawkeye’s visit and draws the target on the two way mirror provides great allusion for what is to come, both in continuity and in the future of this blog (6/20)  But anyways, Clint is forced to question what he has become after the final battle and ultimately doubts “whether Hawkeye can be a hero, let alone a hero and a spy?”  That’s where the second great scene comes in. 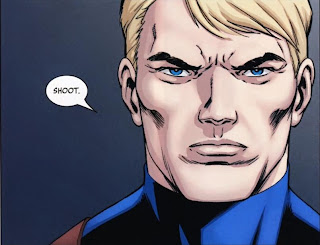 Captain America, Steve Rogers, has this great two page spread where he encourages Hawkeye to be strong and instills faith in him.  This is particularly meaningful to people who know that Cap and Hawkeye have never really seen eye to eye, but have fought alongside each other for years.  Through different teams of Avengers, chin punches, and conflicting ideologies, their relationship has stayed solid.  Solid enough to weather any storm, not unlike Hawkeye’s relationship with Mockingbird.  Truthfully, any relationship that can transcend death and resurrection is generally firm.  The relationships that the characters in this book have with each other make them palpable and believable.
Good wins in the end.  Characters find self-enlightenment and secret strengths.  Hawkeye shows himself as the altruistic man that he is.  He decides to stay close to Mockingbird and help her team while remaining a voice/spy for Cap’s Avengers.  Mockingbird makes some decisions that will shape her future as well when she leaves her family again.  I thought that this series was a good, not great read.  The art is pleasing to the eye, but not exciting.  The story is commendable, but not revelatory.  The only things that made me say “wow” were those two scenes at the end.  I mean if all I can be intrigued by is two scenes after all of the fighting and intrigue had concluded, there is something wrong with that.  In the end, although they are laughably similar, Hawkeye and Mockingbird were no Green Arrow and Black Canary.

Previous: Watch this Hawkeye Origin Video from Watchmojo.com
Next: Widowmaker