Welcome to the first post of the Month of Hawkeye.  I am trying to give more than a three dimensional view of the character this month as I feature different looks at Hawkeye from different series that he has been a part of.  I really want to give this fan-favorite the star treatment that he deserves, so keep up with the blog this month for all Hawkeye all of the time!  Here we go:

Around 2003, The Marvel Universe “rebooted” with the “Ultimate” continuity.  As we have spoken about before, this was a more modern and edgier vision of the heroes and villains we had all grown up with.  They found great success as the edginess really brought the characters to life and made them more believable.  I would contend that no “Ultimate” series was more realistic and brilliantly done than The Ultimates.

The Ultimates are the “Ultimate” reboot of the Avengers.  The team originally consisted of such stalwarts as Nick Fury, Giant Man, Iron Man, Captain America, and the Wasp.  In the first of the title’s three series (I would contend that two should only be legitimately considered Ultimates titles) these characters are seen “assembling” as Avengers are inclined to do for the first four issues.  In issue five, Banner loses control and the Ultimates have to put the Hulk down for the next couple of issues.  The honesty that the series conveys is evident in the fact that powered people have problems just like us.  The Ultimates is literally in my top three favorite comic book series ever, possibly number one depending on the day.  Mark Millar is a favorite writer of mine and the consistent and meticulous work by Bryan Hitch makes me able to read Ultimates and Ultimates 2 over and over.  It reads like a movie!  The real magic for Ultimates (version 1), however, kicks in with issue number 8.
There are aliens ready to K.O. Earth and so the Ultimates recruit new talent and promote rising stars.  The original Avengers comic is widely considered to have gotten much more interesting and hit its glory days when Quicksilver and Scarlet Witch joined up.  Issue number eight sees the same ill-parented duo joining up with the Ultimates as well as the promotion of Black Widow and Hawkeye from S.H.I.E.L.D.’s Black Ops division to the main stage.  Clint Barton, or Hawkeye becomes a member of the Ultimates.  Ultimate, ultimate, ultimate…I feel as though that word is 80% of what has been written, but since you have already spent 5 minutes reading this, I will press on.  So there are aliens and Hawkeye is on the team. 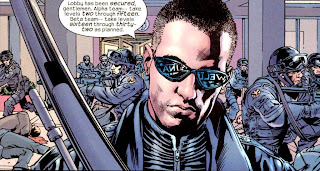 Hawkeye’s introduction into the Ultimate Universe is nothing short of epic.  He leads a team of SWAT type S.H.I.E.L.D. agents to raid an alien sleeper cell in an office building.  It feels very Matrix-esque as he just walks in and clears level after level with his bow and arrow.  He cuts down the enemies like nothing and shows that he belongs.  It’s a great beginning for the character who will be a contributing member of the Ultimates in the war with the aliens and eventually tranquilize the Hulk after it strikes the final blow to the enemy.  Sadly, other than some great dialogue, Hawkeye doesn’t really do much else in Ultimates (version 1).  Ultimates 2 isn’t a whole lot different as he is shot and his family is killed in more of a victim/redemption story element, so I thought issue 8 was really his greatest exposure. 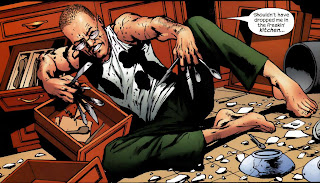 In the Ultimates series, Hawkeye is a skilled and dangerous warrior, but might not be utilized to his fullest.  His accuracy is deadly and useful to the team, but not necessarily spectacular.  This version of Hawkeye ended up being a great addition to the Ultimates universe, but his effect on it was more of a ripple than an impact.  Ultimate Hawkeye is set up by Millar to be a really strong character, but much like the original Avengers, he kind of gets lost behind Captain America, Thor, and Iron Man.  I personally believe that for  Hawkeye, he needs to almost always be taken out of the team and into the spotlight to really shine.  As it is, he is responsible for great moments, but not great issues.  They need to make an Ultimate West Coast Ultimates and let Ultimate Hawkeye lead the Ultimate team!  Who’s with me?