Thank you for your patronage on the newly resurrected Comical-Musings! We are thrilled that you are one of the nearly 10,000 views that we have received in the last year or two. We had taken a four month hiatus, but we are back! We are happy to see you again. Today, we discuss a recent offering from the surging, Image comics, Hell Yeah. 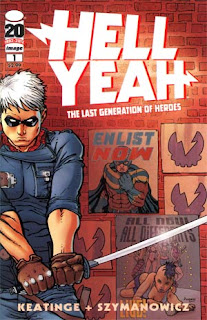 Due to the aforementioned surge of creativity at Image and the mild buzz around a cool looking book with a sexy name, i was actually excited to try this book. Sadly, it came up lacking. I’m sure that there are many who might disagree, but I found it un-enjoyable.

Hell Yeah focuses on a young, rebel without a cause type character with a legacy to live up to, an attitude, and a possible problem at home. At first glance, this could be the plot to Invincible, but Mark Grayson he is not. I found him to be accurately angst-ridden and rebellious, but that was just annoying and not endearing at all. Also, I felt very little connection to him as he walks around delivering pithy dialogue in some cool military-esque jumpsuit. The comic book felt a lot like The Gilmore Girls to me. A “cool” show with “good” writing that I simply don’t get. The dialogue is set up well and its clever, but never pays off or tells me anything. This leaves me in the same place that I was in before I read it, minus the excitement of a possible comic book classic.
The main reason that I was super disappointed by Hell Yeah is that it failed to achieve the simplest of comic book tasks… nailing a first issue. In modern day comic books, having a successful first issue that intrigues your new fanbase and sets up continuity is typically the easiest part. Creators seem to begin to face challenges when trying to keep up quality in long runs or when they’re trying to write an ending that satisfies their readers and tells their story. Hell Yeah didn’t intrigue me at all and left me wanting. Even Deadpool comics have established continuities and they set up stories well, and Hell Yeah can’t even do that…that is saying something.
So, in summation, I found Hell Yeah lacking, both as a series, but also conceptually. There was little to get excited about and I feel that the hype was misplaced. Could issue two surprise me and redeem the whole thing? Maybe, but I’m not going to purchase it to find out.