Welcome to Comical-Musings on this beautifully particular day.  On a day with such particularity, we are tasked with reviewing the first 6 issues of Brian Michael Bendis’ 2010-2011 series, The Avengers.  The Avengers have been through quite a bit over the years, but when they found Bendis, the stories just got consistently “good.”  Warning Before You Read Ahead: This series is not for the “time-travel” faint of heart as these issues are chock full of Kang the Conqueror. 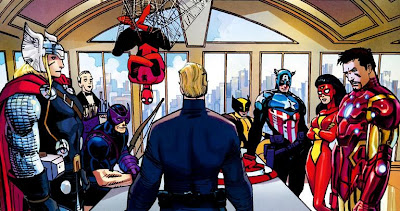 The Heroic Age is the time period in the Marvel Universe after Civil War had ripped everyone apart, Secret Invasion had made everyone paranoid, Dark Reign had enthroned evil, and Siege had dethroned evil.  It was time for the Marvel Universe to get back to good old superhero comics.  Villains took up antagonistic roles again and heroes started to fight back.  The Avengers re-form (against Wonder Man’s wishes) and begin to operate as a team again.  This is significant and interesting as we get to see Iron Man and Steve Rogers (Captain America) interaction after all of the betrayal and death.  Their relationship is strained to say the least, but Steve is happy to have Iron Man on the team.  In a strange turn of events, Bucky Barnes, the Winter Soldier, is in the Captain America costume and trying to fit in.  It is comical how he tries to fit in, but can’t stop shooting at things with his WWII pistol.  Another zany addition is Noh Varr, who often goes by The Protector or Marvel Boy.  Noh Varr is a Kree hero who has basically replaced Captain Marvel as “The Protector” of Earth.  The heroes are just warming up to each other and getting to know the rest of the team when they are interrupted by Kang.

Kang The Conqueror’s message is that The Avengers’ children are going to ruin everything in the future.  He implores them to travel to the future and save it.  We find later that this was only an emotional trick to get them there and that the real problem is the nearly omnipotent artificial intelligence, Ultron.  The heroes make preparations for time travel and are suddenly greeted by strange circumstances.  The world seems to slowly and progressively be going mad.  There are monsters and people of importance from different times popping up in the present and messing everything up.  When half of our heroes get to the future, they find future versions of some of themselves and realize that they have to find a solution to the “Ultron War” or time itself will be ripped all apart.  Kang has tried to defeat Ultron in this great battle on multiple occasions with heroes that he has picked from various times.  Kang’s irresponsibility and carelessness in extricating the heroes has caused strain to the timestream.  It is a dire situation with seemingly no answer.  In a signature “outside of the box” move Iron Man convinces Ultron that if he doesn’t “lose” this battle then time will be broken and he will have nothing to rule.  It’s a decisive, team-building victory for The Avengers and everyone wins.  Everyone except Bucky, who is a part of my favorite moment in the whole comic book.
The Avengers have won the day and not only saved the future, but the past and present as well.  They have celebrated with their future selves for moments before they travel back to the present and they all have friendly parting words for each other.  As they begin to teleport back to them, we are given this panel as a magical allusion to something coming:

Bucky is the lovable everyman getting a shot at being Captain America and then the old version of the Hulk cusses him like that?  I would LOVE to know what that’s going to be about.  Ah, time travel stories…..
Anyways, the writing on the series is Bendis who basically runs the Marvel Universe, so it is nearly guaranteed to be good.  Bendis brought the Avengers back from mediocrity and this series is continuing that upward trend.  The art by John Romita Sr. is very different and distinctive.  It could come off sketchy, but in a very weird and cartoony way, it’s very expressive.  I really liked it and when you see it, you know exactly who it is drawing.  The whole package was very well done and tidy as opposed to over-thought and drawn out.  I think that all of the stylistic choices for this book were done right.  The story was a good launch pad for this batch of adventurers and if you want to give it a read, Instocktrades.com has it for $12.39.  It’s well worth it and SPOILER ALERT: The next arc is really good and I will review it later.

Tagged with: AMAZING bendis The Avengers the future

Previous: A funny little video about drugs and hypocrisy…
Next: The Single Issue Adventure Week 3: It’s Month 2, How Do You Like Me Now?