As many of you may have read, Comical-Musings is now being taken over by the authorship group of The Writer’s Blok.  These 5 like-minded individuals will be partnering with me, Scott Deaux as the editor-in-chief to bring you larger quantities of content, greater quality content, and different viewpoints that allow the blog to become something greater than just my singular thoughts and knowledge about things.  One of these new Writer’s Blok contributors is my wife’s best friend for many years, Cap.  Cap shares his namesake with his favorite superhero, Captain America.  Though, Comical-Musings ain’t rolling out no “Replacement Bucky Cap,” here!  After he hung up his Nazi-killing gloves, Cap received an English Lit degree from Texas A&M and has written previously on a political blog for over a year.  I know what you are asking yourself…The answer is “Yes, this does make him the most qualified author on Comical-Musings.”

Established horror artist Richard Corben has nearly 40 of animation/writing work under his belt, in 2008 he took his work to the adaptation of some of HP Lovecraft’s stories and poems into comic book form.  He’s worked on numerous projects, most bordering on the bizarre or fantastical (an excellent focus to have for one who wishes to develop a Lovecraftian comic).  I was wandering though a local bookstore and happened across his volume, drawn in by the cover art, and then snagged by the title, without much further thought it was on its way home with me. 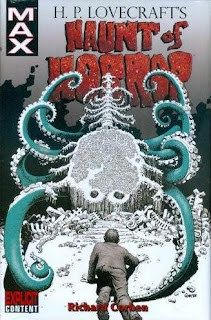 In this collection, Corben has adapted 9 works of Lovecraft into comic form.  Obviously for the shorter works, such as his adaption of poems, he’s taken more license with how he plays the stories out, ensuring that they do indeed follow the words of Lovecraft without betraying the story held within.  Don’t believe me?  The Volume version of this collection boasts each story/poem following each comic’s conclusion.  I would venture that this benefits readers who’ve never read Lovecraft before, because it saves them from having to track down the original story/poem in an alternate anthology (pretty convenient if you ask me).
His animation style seems fairly straight forward given a cursory glance, but when you take the time to really look into his work (rather than just ‘at it’) and examine the work progressively, you start to notice hints of surrealism creeping into each subsequent frame.  As the stories progress the implementation of surrealism (and horror) grows even stronger, and little by little, what started out as a somber visual event is unleashed into visually chaotic and maddening scenes seasoned Lovecraft-readers would know to expect.  By the final frames, events are clearly out of hand, a clear emotion of terror and fear blatantly over take the page.   Ordinarily I would contend that a straight grayscale animation style like this would be incapable of portraying the staple of most horror animations; gore, but this obviously did not hinder a veteran like Corben.   When the build of the frame and angle allow even the gray gore to “pop” from the rest of the presented grays, you’re looking at something special.
Probably my most favorite of the adaptations is “Facts Concerning the Late Arthur Jermyn and His Family” (though “Dagon” deserve a 1A rating); just like the others it will end in despair, but this one does the best at foreshadowing that fact from the very first page.   We’re given a protagonist, Arthur, desperately vying for societal acceptance into a gentlemen’s social club (note to potential younger readers; gentlemen’s club had an entirely different context back in Lovecraft’s days; Arthur was not ‘jones-ing for a lap-dance’), however the major roadblock to gaining that validation that he so desperately desires is his family’s past.  His great grandfather supposedly found an ancient civilization of ape-men in the Congo and lived amongst them for a year, but never provided proof of their existence.  He brought a wife back from the excursion, but sheltered her from society and she left him when they made a return trip to the Congo.  Shortly after she left him, he was institutionalized.  The dishonor did not end there though, for the following generation’s heir was infamous for rape, and the generation’s heir after that violently murdered a portion of the Jermyn family.
In essence Arthur’s own blood is holding him back from personal satisfaction and establishing himself in society. That’s a situation that I think can resonate well with people, as we’ve all been caught in those social instances where we’ve been judged by the actions (or inactions) of our relations and not by our own merits.  As the dialogue continues a sense of primal desperation overtakes Arthur as he lashes out violently striking at his opposition; immediately after he’s subdued and continues his pleas he offers up his pacifist poetry as evidence of his refinement and further proof that he’s different from his past.  As if on command Arthur’s shipment arrives from a colleague in Africa, proof that his great grandfather had indeed found a lost civilization.  As they open the crate they find a female apelike corpse, with a necklace of the Jermyn coat of arms, a bystander remarks that both the corpse and Arthur share the same birthmark.  A fit of instant self realization overtakes Arthur as his odd features and family’s violent history come into focus as a response he bursts through a window, runs out to a car and ignites himself in a torrent of flames thanks to a stolen gas tank.  The final frame shows a bright inferno with an anguished form at the center set in front of the mansion at night. 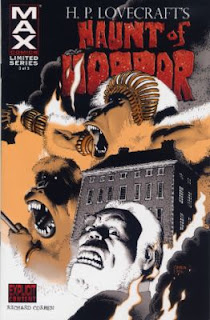 The art alone makes this volume well worth purchasing and any Lovecraft fan should definitely give this volume a chance and add it to their collection.