I Should Have Let The Green Lantern Movie Escape My Sight

Come with me on a journey through time, won’t you?  I’m writing this having just sat through a midnight screening of Green Lantern on its opening day.  But you won’t be reading this until later in the summer, and I honestly anticipate that its release on DVD will not be far behind.  Even so, I feel compelled to warn you that this article may contain spoilers (but can something that has already gone bad really spoil?)  I also feel compelled to welcome you (back) to Comical Musings; we’re working for the betterment of humanity.  This digital text was organized by Scott’s brother-in-arm-chairs, Hal.  Hello.    Initiate disclaimer:  I am not a movie critic, nor do I play one on TV.
Considering that significant time has passed since the film was released, I will try to avoid providing a movie review and jumping on the bandwagon of decrying the movie’s cinematic shortcomings.  I also want to avoid picking apart some of the movie’s logical failures.  I realize some suspension of disbelief is expected when watching a movie about a super-powered, intergalactic, ring-wearing police force.  And despite this being a comic book blog, I will try to minimize my condemnation of the film for falling short in the area of nerd trivia, even if Hal Jordan (Ryan Reynolds) did describe the renowned Green Lantern Tomar-Re (pictured above right) as looking like a fish, when there is a clear shot of space-fish Naut Ke Loi (pictured below) a few seconds later.  (Like I said, I’ll try.)
Instead, there is a deeper problem with the Green Lantern movie that I would like to address.  Namely, the producers of this movie seem to have completely lost the concept of valor.  In an effort to make the main character more approachable and relatable, they made Hal Jordan less heroic and more introspective and self-focused.  The film makers’ opinion seemed to be that Hal is a hero because he has the ring, when in the comics he has the ring because he is a hero.
The Silver Age Green Lantern is my favorite main-stream comic book super hero.  The Silver Age of comics was a time when established figures were being re-defined and taking on depth of character.  After WWII it took more than stories of mobsters getting beat up in the name of justice to hold the interest of the comic buying public.  Super heroes were given weaknesses.  They were no longer invincible, but they still fought as if they were, because good defeating evil was more important than their own personal welfare.  In this environment, the Green Lantern was reinvented as a member of an army of brave warriors from across the universe, who were charged with keeping the peace and equipped with powerful rings (that were ineffective against yellow.)  Hal Jordan was selected for being a man without fear.
The movie version did not live up to this standard.  In the movie Hal Jordan has to embrace his humanity and his fear before he can fully step into his role as Green Lantern.  Making things worse, he lacks the valorous character that defines Hal Jordan in the comic books.
After some initial training on the Green Lantern home planet, Oa, Hal decides he isn’t cut out for being a Green Lantern and goes back to Earth.  While still wearing the ring and the costume, he tells his love interest, Carol Ferris, that he quit the Green Lantern Corps.  (I guess he thought he got to keep the ring as a consolation prize.)  But a short time later he changes his mind and dramatically interrupts a meeting of the Guardians to announce that he is back on the team.  They seem a little confused, as if they weren’t aware that he had previously decided to quit.  He thinks he’s the most important person in the universe, when actually, they hadn’t noticed his absence.  This exchange, and the fact that he is so wrapped up in his own drama makes him seem somewhat pathetic.  He doesn’t express any sense of duty to the Green Lantern Corps. or to responsibly use the power he has been given.  One of the most telling scenes is when he first discovers the ring’s power.  He gets attacked by some thugs, but he doesn’t use the ring to protect himself.  Instead, when they’re satisfied at having beaten him sufficiently, he uses the ring to sucker punch them through brick walls with a giant glowing fist.  That is hardly heroic.  Maybe the fact that the film’s producers were downplaying his personal heroism explains why they only have him recite the Green Lantern oath once.
The uninspiring portrayal of Hal Jordan made the whole film disappointing.  Unlike Tony Stark in the Iron Man movies, I can’t see audiences wanting to be like Hal.  Kids might want to wield his power ring, but he isn’t presented as an upstanding, courageous individual that others would aspire to emulate.  I’m hoping that some of the other comic book-based movies this summer do a better job, and that Hollywood and/or our culture hasn’t lost its understanding of valor.
~ Hal ~ 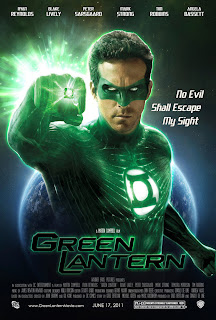 Note from the editor:  Hal Mars is mostly my brother and the biggest Green Lantern enthusiast that I know.  I read Green Lantern for the first time on his suggestion.  The fact that he HATED this movie and judged it fairly and professionally should be inspiring to us all.  This post didn’t include even one swearword.  Well done Hal. ~ Scott Deaux
2011-07-27
Hal
Previous: The 6th Gun (Part 1)
Next: The 6th Gun (Part 2)