I’m Feeling Lonely For Quality After Reading “The Loners”

Hi.  We are Comical-Musings, you are the reader and the subject is C.B. Cebulski’s “The Loners.”  This group was a direct spin off from the wildly successful Runaways series and had great potential.  So when we look at “The Loners,” do we leave with a positive feeling or a bad taste in our mouths? 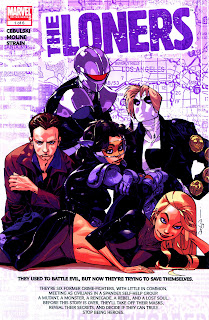 The Loners is a support group for retired teen superheroes.  It’s ranks boast Spidergirl, Green Goblin (Phil Urich), Darkhawk, Julie Power (from Power Pack), Turbo, and Johnny Gallo Aka Ricochet.  This is an odd mix of heroes, but the point of their group is to suppress their urges toward vigilantism and instead opt for a “normal” life.  The only two members of this group that I was familiar with when I first encountered The Loners in Runaways were Ricochet and Darkhawk.  You see, Darkhawk and The New Warriors was one of the first comic books that I ever read and Slinger (where Ricochet comes from) was the first series that I hunted down issues for as a young man.  Needless to say, the premise of The Loners was sentimental to me.  They are heroes that I knew when I was young and it’s good to see them now that we all have grown up.  I really enjoy the premise of the book.  I wish that I could say the same for the execution of the story.

Don’t get me wrong, The Loners has some good moments, but overall falls a bit flat.  The premise promises so many things that it does not deliver.  The heroes are an eclectic group that should be much more interesting than they are.  The art can be truly forgettable.  So, there are many things tripping this comic book up from attaining greatness.  Let me explain. This premise is so good that this book comes out feeling like a missed opportunity.  There have been many therapy books over the years in the Marvel Universe.  Most of them involve Doc Samson, the resident super-powered superhero psychologist.  Peter David’s X-Factor had one of the best examples of a team going through therapy and that issue of X-Factor is one of my favorite comics that I have ever read.  The therapy/psycho-analysis books are particularly interesting because they show us how these characters think and feel deep down.  That is not the case with The Loners.  The Loners conduct their meetings like AA meetings, they all begin with “Hi, my name is ___ and I was a teenage superhero.”  They never dig deeper than that.  There is very little entertainment to be had with a group of characters that you don’t know just doing things.  The book tries very hard to make Julie a main accessible point to readers, but all we end up getting is the fact that she is a lesbian and that she wants to have powers.  The fact that she was a lesbian was a badly kept secret throughout the book.  My main problem however was Phil Urich.  His descent into madness and Green Goblin-hood was nowhere near as good as I thought that it would be.  He was the emotional straight man on the team and you would think that C.B. would have dug deeper into the character to provide what could have been the best part of the story.  They added another one of my favorite forgotten characters from Generation X at the end of the story and even that still couldn’t win me over.  The plot felt like it was cut off abruptly and lost all of the meaning at the end.  It had promise and ALL of the writing wasn’t terrible, but it was shameful in how good of a concept was wasted.
When I said that the group was eclectic, I was not kidding.  There are many diverse characters from different teams, different ethnicity’s, different corners of the Marvel Universe even that were represented in The Loners.  There was great possibilities for this book to hook fans of many bygone comic book series and people of different genders, nationalities, and as we mentioned before sexual orientation (Julie Power has not come out yet, but could potentially make a strong roll model to the homosexual community).  With all of that diversity, the characters are mostly two dimensional and bland.  There are moments when we catch glimpses of humanity from The Loners, but not often enough to feel like they could be “real people.”
I felt that the art was a little lacking.  I mean to say that the artist, Moline started out very strong, but faltered near the middle and fell off at the end.  Moline seems to strive to cram too much in per page and it seems that the art might be more inspired with a little room to grow.  It wasn’t terrible, it just wasn’t enough to save this book from mediocrity.
There was some good to this comic.  It had fun moments and some of the relationship stuff between Loners was intriguing.  The relationship between Turbo and Darkhawk had some realistic dialogue to it and I liked how the weird tension between Darkhawk and Spidergirl was drawn ad written.  The story did a great job of picking great forgotten C or D-List characters, but didn’t really do much with them.  When I weighed the good and bad of this book on the scale of good comics, bad had a slight edge.  If I had to rank it 1-10, I would give it a 4 or a 5.  If you want to read The Loners, you can buy it on Instocktrades.com for $9.29.  Let me know what you think in the comments section and as always, keep reading!
~ Scott Deaux ~
2011-10-16
Tim Jenkins
Previous: Super?
Next: How To Read Comics… (Part 2)