I’m Ready to Move to Earth 2 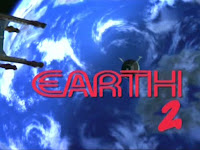 It was a bold move for DC Comics to name one of their new comic titles after a cancelled NBC sci-fi series, but they clearly believe this alternate reality is worth the risk.  And despite a complete lack of alien reptile-monkeys, I believe their gambit has paid off so far.

Welcome back to Comical-Musings, unless you’re new.  In which case, I’m Hal, and I’ve been closely following DC’s new series Earth 2.  This blog initially became interested when DC caused a stir by changing the sexual orientation of the original Green Lantern.  Upon reading the first two issues I was pleasantly surprised to discover that the series is actually interesting, and Alan Scott’s orientation is a non-issue.  The more I hear about what might be in store for DC’s favorite parallel world, the more excited I am for the next issue.  CAUTION: This post contains spoilers.  Our aim here at Comical-Musings is to inspire interest in printed comics, not to ruin the surprise.  So far only two issues of Earth 2 have been published, so there’s not that much reading to catch-up on.

The first thing you have to understand is that I am an appreciator of comic book history, especially in the DC Universe, and Earth 2 is a place where history comes alive (in a good way.)  DC’s Earth 2 is takes place in an alternate dimension where Superman, Wonder Woman, and Batman are dead; and it provides DC with a platform from which to launch some of their classic Golden-Age characters into their newly rebooted continuity.  While they have taken this opportunity to modernize some of their characters, it is still exciting for me to see some of the old-school heroes brought back into action.

Others who are following this series will have noticed that while issue #2 was released on June 6, Earth 2 issue #3 is due out on July 4, because seven ate nine.  I didn’t discover this until I noticed issue #3’s absense at my local comic store.  That will teach me to always check release dates on DC’s website.  But while I was investigating when to expect the next installment, I discovered some tantilizing tidbits in the descriptions of upcoming issues.  The teaser for issue #4 directly announces “The debut of the all-new ATOM SMASHER!”  It also includes the crypric description: “A monstrous evil claws its way out of the poisoned soil of EARTH 2!”  Sounds like Solomon Grundy to me.  Too bad that issue won’t be released on a Monday.

DC has also announced that issue #0 of all of their current titles will be released in September, to provide some back-story on many series that seem to have started in medias res.  This will include an issue #0 of Earth 2, but frankly, I suspect it is an attempt to get a little more mileage out of the redesigned Earth 2 costumes of Superman, Wonder Woman, and Batman, which were greatly ballyhooed before the series’ debut, but ultimately proved to be a red herring.  However, DC’s website says issue #0 will also include “the tragic origin of Earth 2’s greatest villain!”  So, who knows?  (No longer content with playing “Born to be Wild” and “Magic Carpet Ride,” Steppenwolf hatched a plan to use the forces of Apokolips to kill Superman…)

Much more interestingly, there were clues about other potential members of a reassembled Justice Society hiding in issue #2.  Alas, I cannot claim to have discovered them myself.  While doing research for another blog post, I discovered this analysis at Inside Pulse.  When Michael Holt lands in Earth 2, a panoramic shot shows his surroundings to establish that he is not in Kansas anymore.  The panel on the left shows a billboard announcing a fight between Grant and Montez.  Ted Grant was the name of the original Wildcat, who started his career as a heavyweight boxer.  The site linked above contains some discussion of whether the picture of Grant looks African-American, but I will leave it up to the our resident expert in ethnic studies, The Blackness Monster, to evaluate if a black Wildcat would be too similar to Marvel’s Black Panther.  In the same panel there are also billboards advertizing TylerChem.  Chemist Rex Tyler was the original Hourman, and back in issue #1 Jay Garrick’s ex-girlfriend said she was moving to California to work for Rex Tyler’s chemical company.  So, it should be interesting to see who else surfaces to team up with Alan Scott, Jay Garrick, Hawkgirl, and at least one Mr. Terriffic.  (It looks like Michael Holt and Terry Sloan are going to have some sort of terriffic-off to compete for the title.  The loser will be forced to assume the name Mr. Pretty-good.)

Leave us a comment and let us know what classic characters you would like to see re-emerge in Earth 2.

Previous: Reader Romance From Ben
Next: Batman Minus Batman (Batman: Streets of Gotham)