In Honor of Captain America

I was always a fan of comics, but I rarely ever read them as a kid because we were always too busy with sports or as a high-schooler, because they didn’t ship comics to where we lived overseas.  I always knew that Captain America was one of my favorite heroes, not because I read his comics, but because of his history and what he obviously represents (but I never really understood why, until I read this volume).  This is the volume that got me re-interested in comic books again and reading much more than I ever had previously.

Living overseas for 4 years, I rarely got to see the American flag in public, I practically never heard our national anthem played anywhere publically either; and to some people that probably doesn’t sound like much.  It doesn’t strike you folks as an alien experience because you get to hear/see those two things often enough that it slips into the peripheral of your attention.  I loved living overseas, don’t get me wrong, but there was always a part of me that yearned to be “home”, and in that state of yearning any symbol or representation of home can make a drastic difference. 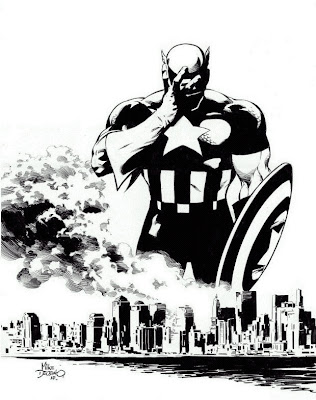 I had the express privilege of coming back to my home country to go to college, at the one and only University I had ever wanted to attend.  That was the fall of 2001.  Classes had been in session for only one or two weeks when September 11th happened.  Across the country all levels of organizations and institutions came together to celebrate the bravery of the first responders and to celebrate the endurance and fortitude of the American spirit.   In the span of 11 days, a small group of students on my campus organized what you’ll see below as part of that wave of American exceptionalism.

This comic was a chance for Marvel to make a statement.  Plenty of superheroes were given comics as a response to 9-11, but none would be more representative nor more scrutinized than Captain America’s 9-11 comic, how can you compare any other character’s reaction to 9-11 as being more paramount than Captain America’s?  One might expect the comic to start off ‘guns a-blazing’ and Cap mid-battle with some terrorists, instead the writer took us a different route, and we’re taken to a devastated ground zero with Steve Rogers in civilian clothes, searching for victims.  The American frames (I chose to ignore the terrorist intro, since they are the cause and not the focal point of this work) start in drab grey, Steve Rogers is tirelessly (and some could say fruitlessly) digging through rubble to find survivors.

This seeming less helpless act is Steve Rogers’ (and Captain America’s) first test as a patriot, instead of venturing off to immediately punish the bad guys, he’s elected to look after the innocents and care for his country.  Nick Fury shows up out of the haze and confronts Steve at Ground Zero, saying in not so many words, that he needs Steve to head to Kandahar (another temptation to immediately seek vengeance).  Steve responds by laying Fury out and saying “You need me?  Look around, They need me.”  An exclamatory realization that all the good he could do rooting out terrorists could never amount more to the impact as an unnamed worker diligently searching for victims.
This is a defining moment for Cap (as it would be for anyone) and we’re not even 8 pages into the volume. In countless other series and editions Captain America has been illustrated as being wise, and knowledgeable beyond his peers, a natural leader in a most capable body, he represents the most optimal personification of America’s greatest generation and yet this monumental and emotional task does not overtake him.  It is after this that we see color start to trickle back into the frames, exclaimed by the first vision of his shield. That initially stands in grand contrast to the rest of the grays and earth-tones.
Cap’s declaration and actions have inspired hope, but within the American culture a distrust and resentment towards Arabs is starting to evolve.  In that fashion, the grief of loss and mouring takes its toll on nameless citizens and creates an animosity towards arab-americans.  A berieved non-descript-american encounters a lone american citizen of arab descent walking home late one night.  Of course Cap just happens to be nearby, realizing that tensions are on edge and he intercedes, halting the misguided violence with his shield.  This is the first time in the entire comic that Cap stands in full uniform and shield, after countless drab cells the burst of Red White and Blue overtake the page.  The amazing symbolism of Captain America during such a distraught period has the effect of snapping the rogue citizen out of his hate and refocuses his anger towards the true enemy, and not his neighbor. 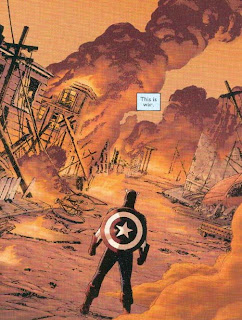 The comic flashes forward a few months and a non-descript terrorist Al-Tariq takes over a town in the middle of nowhere (conveniently called Centerville) by using its citizens as human bombs.  The comic concludes with Cap dropping into the Centerville war-zone with a string of my favorite comicbook quotes as Cap desperately searches the outskirts of Centerville for survivors.  Urging himself on in a self-reflective inner monologue while Centerville is engulfed in flames and ruin;
“Today—
It matters that you’re here.
It’s going to make a difference.
Today – There’s hope.
You’re not too late. “
~ Cap ~
2011-07-22
Cap
Previous: Lobster Johnson: The Iron Prometheus
Next: The 6th Gun (Part 1)