Interviews With The Industry: Rick Cromack

I am happy to welcome you, the reader, to our very first entry in the “Interviews With The Industry” series.  This monthly post seeks to get you a different look at the people who make comic books work through interviewing some of it’s most interesting people.  When you want a comic book, you go to the local comic book store and meet with a retailer, so I thought it best to meet with the most well-spoken retailer that I know.  Today’s offering is the fascinating Mr. Rick Cromack. 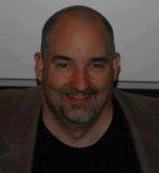 Rick Cromack, a former Navy submariner, radio personality and entertainment journalist and analyst, is a manager with Lone Star Comics & Games, Texas’s largest and oldest retailer of comics, graphic novels, specialty games, and collectibles. He represents Lone Star Comics at various conventions and industry gatherings, and speaks in a variety of public forums about the history of comics, collecting, and other related topics. He is also active in the community, volunteering with his church and local recreational sports organization, and emcees high-profile Metroplex sporting events and other special events. In his early forties, he lives in Allen, Texas with his wife, Holly, and daughter, Becca. Rick and his wife are expecting their second child this Fall.
———————-

Deaux:  Alright Rick, thanks for taking a chance to do this. I feel that you fulfill an important role in comicbookdom.  My first question is what is your official occupation and your place in the world of comic books?

Deaux:   How long have you worked there? Did you start out as an assistant manager or work your way up?

Rick:  I’ve worked for Lone Star Comics & Games for a little over three years. I’ve held a variety of positions in the Company, including Store Manager, but, yes, I worked my way up from the ground floor, so to speak.

Deaux:  And you do a great job as I have referenced before. If you were to estimate, how many regular customers do you serve weekly?

Deaux:  Wow! Thats a lot! So, in your opinion, is the comics industry in as steep of a decline as some people say?

Rick:  Not necessarily. We ARE in a period of adjustment, and certain “brick and mortar” publishing-industry retailers are experiencing difficult times. There are many reasons for this: Cost of manufacturing and, especially, shipping product is on the rise, and with the recession in its fourth year, discretionary income is being squeezed in ways we haven’t experienced in a generation. Books, magazines, and newspapers are all having a very rough time, and the availability of digital content for free, or at a low per-view or subscription-fee cost, is forcing publishers to accept far lower readership levels than they’ve ever seen. All of this factors in to the woes the publishing industry is experiencing, generally. Comics have a particularly difficult time, because of a few factors that are unique to the medium. First, readers of comics have a far lower threshhold of tolerance for advertisements than consumers of magazines or newspapers. Although there was a time when a majority of pages found in a comics publication were liberally splashed with advertisements, a backlash began in the 1980s that changed that business model forever. Second, comics readers have become used to a level of quality, in terms of both art and writing, that has radicaly escalated the cost of publishing for comics companies.

Deaux:  But, there is some kind of magic that occurs when I walk into lonestar and look at a full wall of comic books and see a bunch of kids ready to engage in a card game that I hope never goes away.

Rick:  Well, that’s one of the ways in which the industry has had to adjust. Being both a comics AND a games company means that we don’t have to stress out over much when our comics margins drop. We continue to have decent cash flow even without the comics or graphic novels sales, through our offering of collectible card games, tabletop board and family games, strategy ad tactical simulations, and collectible miniatured games. However — getting back to the challenges of the comics industry for a moment — this is an incredibly opportune moment, when comics have transcended mere cult or counter-culture status and become not merely accepted into, but a seminal part of, modern pop culture.

Deaux:  So are you a comic or games enthusiast or is it just business?

Rick:  The reason why Lone Star hired me was because of my passion for and familiarity with a variety of games, especially certain role-playing games systems (D&D, Paranoia, Twilight: 2000), military / historical tabletop games (Axis & Allies), specialty or genre games (Descent: Journeys in the Dark, Fury of Dracula, Twilight Imperium), and card games (Steve Jackson’s Illuminati). However, naturally I read comics as a kid, and continued to enjoy them well into my 20s, and it’s been fantastic getting back into the comics world and learning more about the history of the medium, the art form, and the business than I ever dreamed of knowing.

Rick:  Oh, well, “D&D”, still the grand old man of the genre; its adaptability, its scale, and its accessibility continue to make it #1 in my book. But I have fond feelings for the other two game systems I mentioned: “Paranoia”, which is a fast-paced, tongue-in-cheek system where each player operates up to six cloned in a dystopian, post-apocalytpic future where humanity is enslaved to a mysterious, all-powerful Computer; and “Twilight: 2000”, another futuristic game that combines elements of “Mad Max” and “Red Dawn”. I’ve actually been working, on and off, on a re-interpretation of “Twilight” for a few years! There are some very fine new systems I’m a big fan of: “Eclipse Phase”, “Dragon Age”, “WarHammer Fantasy”, and the “DC Universe” RPG system.

Deaux:  That sounds crazy is the Dc Universe RPG system based on comic books?

Rick:  It is, but there’s enough flexibility — especially with the new material they’ve been coming out with — so that players aren’t bound by canon. Marvel also just came out with a “Marvel Heroic” system, just the one sourcebook for the moment, but it looks great and the price is right: Just $19.99 for the core sourcebook.

Deaux:  That sounds great! When you play superhero RPGs, which superpowers do you prefer?

Rick:  I like to get in on the rip-roarin’ fight tactics as much as anyone, but, I prefer ranged weapons — and there’s nothing with more range than psionics / telekinetics / mind control. I mean, Wolverine’s got claws, knows martial arts and can heal from pretty much anything, but if you can dig around inside his brainpan and convince him he’s a six-year-old girl playing with butterflies, you win.

Deaux:  So since this a comic book blog, do you have a favorite title right now and why?

Rick:  I’ll tell ya, Image is publishing a LOT of my favorite titles right now: “The Activity”, “Chew”, “Fatale”, “Epic Kill”, “Hell Yeah”, “Infinite Vacation”, “Manhattan Projects”, “Prophet”, “Saga”, “Thief of Thieves”, and, of course, “Walking Dead”. But my favorite, the one I just CANNOT wait to read whenever it hits our shelves, is “Morning Glories”. The brand-new “America’s Got Powers” and “Mind the Gap” are high on my list, too, though.

Deaux:  I love how not mainstream that pick is. What do you like about Nick Spencer’s Morning Glories?

Rick:  “Morning Glories” is a character-driven science fiction saga, set in the WORST POSSIBLE (for the characters — GREAT for we readers) version of Professor Xavier’s School, the Morning Glories Academy. With outstanding artistry (by “Mind the Gap” talent and recent local comic-con luminary Jor Eisma) and a narrative style reminiscent of “Lost”, a slow-burn, slow-reveal plot with all manner of deceits, atrocities and complicated moral conundra, “Morning Glories” may just be the best-written (by longtime DC and Marvel scribe Nick Spencer) comic out there (with “place” going to “Locke & Key”, and “show” to the always-excellent “Walking Dead”).

Deaux:  I have heard good things about it and will have to check it out. In closing, as a retailer, what is the craziest thing that you’ve ever seen at your store?

Rick:  (Laughs) Let me think about that one for a minute…

Rick:  There was this one time when three witches came in. Seriously — they described themselves as being part of a coven, or, maybe, THE coven. This was maybe two, two and a half years ago, and they came in looking for “Twilight” merchandise that they could destroy with extreme prejudice. I recommended some “Edward” and “Bella” action figures, and they walked out happy, planning to set fire to them and maybe chant some dark incantations designed to inflict pain on Stephanie Meyer.

Deaux:  That is hilarious, well thanks for your time Rick and have a great day!
———————-
That is just a sampling of the great conversation and insight that you can gain from talking to Rick Cromack. If you want him to sell you things, you can visit him at Lone Star Comics & Games in Plano, TX where I am sure he will help you find whatever you need with a smile.  Thanks for checking out Comical-Musings today and stay tuned next month for when we will bring you an interview from another interesting personality in the world of comics.
~ Scott Deaux ~
Interviews With The Industry Lone Star Comics and Games Rick Cromack Submariner 2012-05-17
Scott Deaux

Previous: Could This Be The End To Avengers Vs. X-Men?
Next: Dancer