It Gets Better for Alan Scott

If I described a man who wears a red blouse, a flowing purple cape, and a mask; a man who found a lamp made from a meteor and promptly turned it into a fashion accessory; a man who is powerless against wood;  you might ask:  “What, is he some kind of gay superhero from the 40’s?”  You would be correct.
In a move designed to make casual comic book readers everywhere say “Uh…who?” DC announced on June 1st that Alan Scott will undergo sexual-orientation reassignment surgery in the name of progressive inclusiveness.  In late May DC Comics Co-Publisher Dan DiDio announced that one of the DC universe’s iconic characters would be reintroduced as gay in a comic to be released in June.  But after keeping his secret for 72 years, they apparently didn’t want to make Alan Scott wait one day more and identified him as the gay character almost a week before he will out himself in print in issue #2 of the New52 series Earth 2 set to be released on June 6. 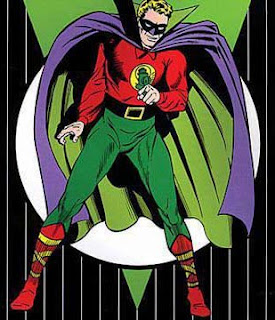 The character Alan Scott was created in 1940 as the original hero to bear the name Green Lantern.  While the identity and back-story of the Green Lanterns has evolved over the years, Alan Scott has persisted and become an elder statesman of the DC universe, as well as a key member of the Justice Society of America.  But the New52 Alan Scott isn’t your grandfather’s original Green Lantern.  He has been re-imagined as a younger incarnation, so all of the character’s previous history, including his two kids, does not apply.  The Earth 2 series also takes place in an alternate dimension where Superman, Batman, and Wonder Woman have all apparently been killed.  I’m a little disappointed that they re-introduced Alan Scott as a young character.  I think an elderly homosexual man would have really been ground-breaking, and I was looking forward to seeing him reminisce about his encounters with J. Edgar Hoover.
To be fair, Alan Scott’s re-orientation was the idea of James Robinson, the writer of Earth2, inspired by the elimination of Scott’s gay son when the entire DC Universe was rebooted.  But it’s fun to imagine the DC board meeting where this decision was made.
Exec 1:  “Okay, Marvel is having a gay wedding, so we need to make one of our iconic characters gay to steal their thunder.  Let’s start at the top of the list.  Who is our oldest, most established property?”
Exec 2:  “Superman?”
Exec 1:  “No good.  He’s too iconic.  The Man-of-Steel can’t have a limp wrist. Who’s the second most iconic?”
Exec 2:  “Batman.”
Exec 1:  “No.  I don’t want to affect box office returns for Dark Knight Rises.  Who’s after that?”
Exec 2:  “Wonder Woman.”
Exec 1:  “No.  It has to be a guy.  Next?”
Exec 2:  “The Green Lantern.”
Exec 1:  “Hmmm… That could work.  Alan Scott could be gay and I don’t think anyone would care.  Who’s after him on the list?”
Exec 2:  “Aquaman.”
Exec 1:  “Oooh… I think that might be taken as an insult to the gay community.  Let’s go with Green Lantern.” 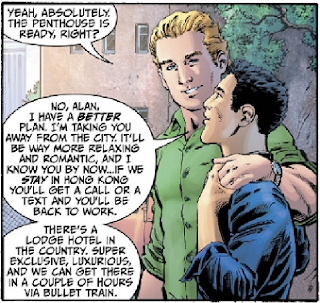 While this exchange may never have happened, it is hilarious to watch DC’s staff awkwardly try to pat themselves on the back while reassuring readers that the comics won’t be too gay.  Earth 2’s artist, Nicola Scott, describes the new Alan Scott as “…an incredibly open, honest and warm man… His sexuality is incidental. Every time I draw him I love him even more.”  But when he eventually meets Hal Jordan, the Green Lantern from the primary dimension in the DC universe, Robinson makes it clear: “When they’re firing their rings at the same time, you’ll be able to tell which energy is which.   That’s a very important thing so that it sets them apart.”  Um…okay.
So, congratulations to my friend, previously identified as the Mother of Champions, she guessed it.  But DC went in a totally different direction than I anticipated.  Rather than introducing a new gay character to become a Green Lantern, they re-worked the character that has held the title the longest.  Even so, astute readers should have seen this coming.  Alan Scott/Green Lantern is definitely iconic.  And in the pre-reboot DC continuity he had a son who was gay, not that that really means anything.  More importantly, James Robinson authored the first gay kiss in mainstream comics when he was writing Starman, so breaking ground with gay characters is nothing new to him.  I will admit, I was thrown off by a popular (and obviously false) stereotype:  I thought gay gentlemen had better fashion sense.
In seriousness, DC will probably update Alan Scott’s costume.  I’ll read the first couple issues of Earth 2 and review them in a future blog post.  I’ll also pass the issues along to the Mother of Champions as her prize.  You may be wondering, will I now drape a black cloth over my signed illustration of Alan Scott?  Absolutely not!  In fact, after moving recently, I haven’t been motivated to hang it back up.  But now I will find some prominent wall space and display it with pride.  I’m glad gay comic book readers can now have a role model who isn’t Canadian.
However, I find it a little dubious that the character’s creator, Mart Nodell, didn’t get a vote in his creation’s new orientation.  Nodell passed away in 2006.  So far seismographs placed on his grave have yet to detect the tell-tale vibrations caused by him rolling over.  When prodded for a reaction, Nodell’s other famous creation, the Pillsbury Doughboy, only responded with an evasive “Tee-hee.”  There has been no word yet on the orientation of Alan Scott’s long-time sidekick Doiby Dickles.
~ Hal ~
Alan Scott DC Comics Gay green lantern Hal Jordan homosexuality 2012-06-01
Hal

Previous: What’s Cooking at Comical-Musings
Next: America’s Got Powers