There are very few comic book creators that could be considered visionaries, but Grant Morrison fits the bill.  He’s the subject of an entire comic convention.  He consistently surprises and provides innovative concepts in an extravagant sort of way.  Grant Morrison can be subtly intense with ideas like nearly-silent creatures of mass destruction in WE3.  He can be very metaphysical and take his ideas off of the page in titles like his work on Animal Man or Flex Mentallo.  Grant Morrison broke the mold and did something that many comic book writers never do by writing a prose book called Supergods that challenged the way that people think.  He can take stories to the edges of the universe like he did in his run on New X-Men or into the depths of human fantasy like The Filth.  He is often copied, but wholly original.  Grant Morrison constantly pioneers new thoughts in his readers, and Joe The Barbarian is no different.

Joe The Barbarian is the story of a middle school boy named Joe and the events of a rainy day.  On the surface, that seems rather dry and could be construed as “boring,” but nothing is “boring” when you add the mind of Morrison.  You see, Joe has a medical condition where his low blood sugar causes him to embark on a grand hallucination adventure.  His toys come to life and aid/hinder him in an epic quest to escape “Lord Death” (actual death) and to obtain a clear mind through “soda” (actual soda).  Again, these might seem simple conceptually, but in this story transformers and GI Joes come to life in Tolkien-esque battle scenes while his pet rat, Jack, becomes his warbound blood brother.

The sweeping landscapes and carefully crafted story would be absolutely nothing without the art of Sean Murphy.  He is a master at his craft and a consummate professional.  His scratchy art styling and self-inking breeds beautiful scenes of rich environments filled with memorable characters.  When I recently listened to a podcasted interview with him that Ifanboy did, I was surprised to find out that most of the work that he did in this book art-wise had less input from Grant than you would think.  Sean had to take many liberties and create his own take on nearly everything.  That gives Joe The Barbarian the distinct quality of being a freestyle collaboration of two professional creators and it brings out a fantastic story in a fully-realized world.

Joe The Barbarian is anything, but ordinary and if there was one knock against it, it would be that you can get lost in it’s fast pace and enormous themes.  Morrison isn’t going to dumb down what he offers, and, since this is Joe’s hallucination, you are dropped into a lot of things and asked to move from plot point to plot point like you know what’s going on.  The fact that this tale fits into 8 issues is really surprising to me, but it feels like a complete work, and I am not sure that stretching it out anymore would be beneficial.  There are a lot of story elements that pay off when you decipher how the hallucination connects to the real world, so trudging through some really thick parts of the story is still enjoyable.  Even if you do get lost, it’s not necessarily a bad thing either… it’s like being lost at Disneyland.

There’s always something cool to look at or a line delivered masterfully in every page of Joe The Barbarian.  It makes for an excellent read and I would recommend this as highly as I have ever recommended anything before.  Many times when I read something as fast paced as this with as big of a scope as it has, I find myself gasping for air and glad that it is over when I am done.  Completion becomes a chore, a satisfying and entertaining chore, but a chore nonetheless.  With Joe The Barbarian, I find myself desperately missing the world and mostly Jack, days later.  I wish that there was a Jack solo story or something more to connect with the world, but as it often is with vacations to exotic locations, you are always left wanting more. 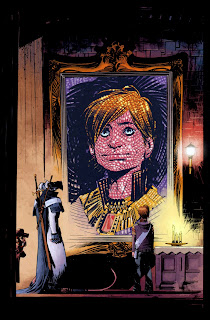 Joe The Barbarian is available at Instocktrades.com for only $16.49 in Deluxe Hardcover Edition and I would suggest that you pick it up and take a vacation to the land of The Iron Kingdom.

Previous: An Exciting New Monthly Column
Next: Could This Be The End To Avengers Vs. X-Men?