Just In Time For The Holidays…Morbius

We here at Comical-Musings hope that you are having a spooky season and are happy to bring you something vampiric today.  That’s right, everyone’s favorite, kind of good, vampire, Morbius is back in action in the pages of Ultimate Spider-Man # 95-96.  You will remember how much I personally love Ultimate Spider-Man from the many posts that I have done and will do on Brian Michael Bendis’ instantly classic series.  It seemed that near the twilight of Bendis’ run with Peter Parker’s Ultimate Spider-Man, he got a little bit bold.  Story after story featured failed concepts from original Spider-Man stories and Bendis somehow made them all between ok and interesting to great and iconic.  He even re-worked and re-told the much hated “Clone Saga” for goodness sake.  The “Morbius concept” is no different. 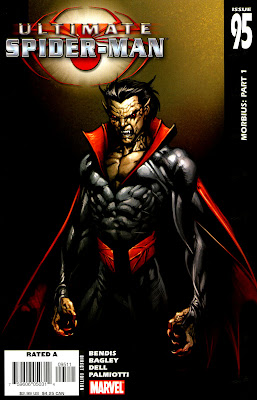 Michael Morbius was originally created as another super-mistake of science (think the Spider-Man incident, but if the spider was a bat) and in that way was a living man, with vampiric abilities.  He was a big part of the regular continuity Spider-Man’s life and was an often used character in the 1990’s.  He was somewhat heroic and enigmatic then and went on to headline his own series.  He was interesting, but odd as a character.

Enter Ultimate Morbius.  He is all vampire baby.  Brother of Dracula and son of Dracul.  He swore on his mother’s deathbed that he would not allow his father’s vampire curse to spread.  He seems to have the power to “Suck the vampire disease out of you.”  Other than that, he is still a little older than Peter and has similar powers and motivations.

In this story, I think that Bendis did alot of things right.  By flashing back to Spider-Man’s encounter with Blade, it sets the darker tone of the book.  To show us a recently turned vampire’s thought process (I am not spoiling who it is) we get a very creepy vibe surrounding the vampires and I feel that it accurately conveys the hunger that drives them.  I applaud Bendis for not making them “Twilight-esque” because while there is certainly a place for that, it was not this book.  You could see a handsome, brooding Michael Morbius fighting his urge for blood and his love for Bella being an interesting reboot, but Bendis makes him ugly and somewhat frightening as it fits his grim purpose much better.  I also thought that the decision to read excerpts from Ben Urich’s Daily Bugle article lent him credence as a legitimate writer and reinforced how important his character is to Peter’s world.  Ben is an inspirational mentor to Peter and it was a good choice to reinforce it here.  The important relational conflict that drives Ultimate Spider-Man was still coursing through the veins of issues 95-96.  The end of 96 was particularly engaging as you really feel for Peter.

The Ultimate Morbius storyline was good.  With a series that tries very hard to be realistic and scientific, it was a little weird to see supernatural elements addressed.  As with every challenge that Ultimate Spider-Man meets, it was handled with poise and intelligence.  You would probably do best to pick these single issues up at mycomicshop.com where each issue is available in near mint condition for $1.10.