As many of you may have read, Comical-Musings is now being taken over by the authorship group of The Writer’s Blok.  These 5 like-minded individuals will be partnering with me, Scott Deaux as the editor-in-chief to bring you larger quantities of content, greater quality content, and different viewpoints that allow the blog to become something greater than just my singular thoughts and knowledge about things.  One of these new Writer’s Blok contributors is Lobster J.  I’ve been friends with the good Lobster for many years and have extreme confidence in his ability to have humorous opinions.  He is kind of a wildcard taste-wise, but tends to fall on the Superhero/Hellboy side of things.  You will enjoy what he has to say…unless you liked the Spiderman movies.“ 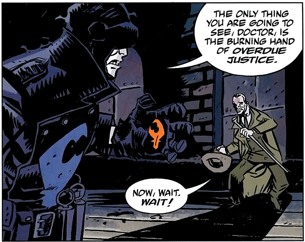 “The only thing you are going to see, doctor, is the burning hand of overdue justice.” As I sat back in my chair, the considerable weight of the epic nature of that line made me keenly aware that I was thoroughly enjoying “Lobster Johnson: The Iron Prometheus.” 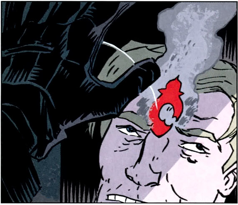 Good writing, be it on a water bottle (ever read those Vitamin Water labels?), song lyrics, classic novel (Tolstoy for the win) or a comic, has always struck a chord within. Even so, my knowledge of any type of literary review could fit into a thimble; I have no formal or classical training, never taken a class, or even read the Wikipedia page. What I do know is how to read, both the words on the pages and the feelings, thoughts, emotions, and reactions to them.

Every reader that turns the pages of “Lobster Johnson: The Iron Prometheus”, or any comic for that matter, brings with them a unique set of expectations, what it is that they want and desire from the comic in their hand. This fact is of crucial importance as it may singularly determine the outcome, enriching satisfaction or disappointing discontent. Don’t go to “Nacho Libre” with the expectation that it is going to be “The Shawshank Redemption.” One of the many efforts of this blog is to align your expectations with various comics by presenting them to you; then, you decide if they are worth your time or a waste of it. And, if you like comics that begin with fights with huge monkeys, “Lobster Johnson: The Iron Prometheus” will certainly be worth your time. 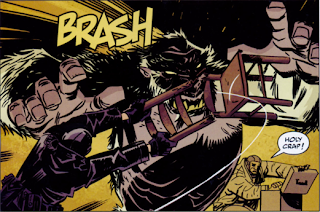 I was lead to Lobster Johnson by way of B.P.R.D., and in similar fashion, Lobster Johnson delivers occult themes, Nazis, myths and legends. If you enjoyed those elements of B.P.R.D., this is very much in the same vein. However, there are a few elements that set it apart. The time is set before World War II, so this is before most all the other B.R.P.D. stories, and more importantly, Lobster Johnson is a hero without any super powers. Man do I love heroes without super powers… There might be some rumors that I have a man crush on the Green Arrow… Anyway, much like the Green Arrow, the Punisher, Batman, Nick Fury, et al., Lobster Johnson possesses nothing more than firearms, training, sweet goggles and an unyielding dedication to justice.

From the first page, reference huge monkey above, I was drawn to the story. There is little background presented initially which creates a strong element of intrigue. Throughout most of the comic, I found myself racing to the next page, the whips of wonder moving me ever quicker! There is a desirable balance in action and plot, which is often not the case. One of the several elements that I relished and wanted to highlight is Lobster Johnson’s gang. They typify the 1930’s working men and their rag-tag, low tech, and oddly endearing support of Lobster Johnson is delightful.
Old world prophecy and myth collide with Lobster Johnson and the late 1930s in “Lobster Johnson: The Iron Prometheus.” With guns blazing and claw of justice searing, Lobster Johnson encounters ancient warriors, Nazis, and forces beyond this world. If any of the above resonates with you, read “Lobster Johnson: The Iron Prometheus.” This tale, from first panel to the last, will leave you slightly puzzled as to what exactly just happened, but entirely content. 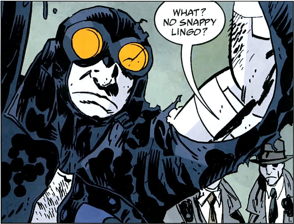