To all of you that are viewing this blog for the first time, “Hello!”  To those of you that “this ain’t your first rodeo,” we say, “welcome home.”  Comical-Musings is your source for recommendations on good comic books to read past and present.  Whether you are a tried and true comic reader with 6 longboxes in your mom’s garage or the greenest of rookies, we look to provide good jumping on points to the hobby, love, passion of comic books.  It seems appropriate after saying all of that to tell you that today’s offering is a prelude to the wildly popular X-Factor by Peter David.  This series, Madrox, was printed as a 5-issue Marvel Knights tale and was meant to set up the new ongoing series by focusing on it’s enigmatic main character.

Jamie Madrox, the Multiple Man (not the white rapper), has been around.  He has been featured in regular continuity, ultimate continuity, and video games.  He’s been a part of good teams, bad teams, and even worked the lone wolf angle before.  His power set is unique in the fact that he generates multiple, separate thinking entities that can gain knowledge and skills independent of him.  He then re-absorbs these “dupes” and gains the knowledge and abilities that they have.  For example in the story, whilst mid-sentence with Rahne Sinclair, a Tibetan monk shows up out of nowhere.  Soon, we realize that he is a dupe and Jamie re-absorbs him gaining years of meditation and study in moments.  The concept is very difficult to grasp at first, but once you get it, the rest of the series comes naturally.  Like riding a bike and watching Multiplicity at the same time. 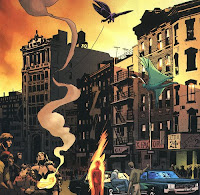 With this unique skill-set, Jamie sets himself up as a detective and begins to work in private investigations for the little slice of Heaven known as District X or Mutant Town.  He brings his friends Wolfsbane and Strong Guy in to help him with business, but soon finds himself embarking on a dangerous undertaking.  Someone has killed one of Jamie’s dupes and he is concerned for his own safety.  He goes off to solve the case and ends up on a wild goose chase with adventure and surprises around every corner.
The writing in Madrox is masterful.  The concept really sings when it is in Peter David’s hands.  He gives the duplicates thematic emotional aspects to annoy Jamie and delight readers.  For instance, there is a scene in Madrox where Jamie works very hard to create a dupe to save him from a deadly predicament and then finds that the dupe in question has been imbued with the defeated, pessimistic side of his personality.  They sit and argue about whether it’s worth it to free him.  It’s amusing.  Another thing that this comic book does well is the way that it handles surprises.  David’s writing is very poetic and Jamie loves to think of his story as a “noir” story.  When fully immersed in noir-style fiction, it tends to catch you, the reader off guard when something stark and shocking happens.  I found myself falling for the unforeseen events as quickly as Jamie time after time.  You’ll never guess who tries to drown him.  Again, this is good writing and that’s why I am suggesting it.
Madrox was a strongly written series and has me relatively excited for Peter David’s second run of X-Factor.  If you like how this sounds and want to give it a try, don’t look for the trade because it is out of print.  The individual issues, when all compiled, will cost you about $10.80 on www.mycomicshop.com, which is less than a trade paperback anyways.  So give it a shot and let us know what you think in the comments section.  Be on the lookout for some great new posts coming at you pretty fast in the month of October.