Moon Knight In The Moon Light or White Batman 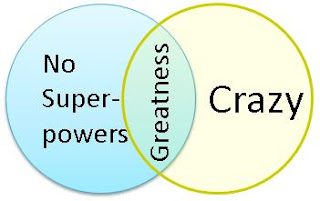 Fourthly, I would like to start off by saying that characters in the comic realm can be grouped into several sub-categories.  There are characters that fight crime but have no actual super powers, like Batman, Iron Man, and Harvey Pekar.  Then there are heroes who are somewhat lacking in the mental health department; the Sentry and Starman come to mind.  The overlap between these two groups is where you will find some of my all-time favorite characters in the comic-book universe. This is where you find the Flaming Carrot as well as the subject of today’s blog: Moon Knight.  The 2011 re-launch of the Moon Knight title changed a few things about the Moon Knight’s back story, but author Brian Michael Bendis and illustrator Alex Maleev did a great job of preserving the disconnect with reality that makes him so interesting.
Moon Knight is a legit super hero.  He is a member of the (West Coast) Avengers.  He is also insane in the membrane.  His alter-ego is Mark Spector, a wealthy television producer living in L.A.  Like Scott, Mark stays up at night thinking about Captain America, Wolverine, and Spiderman.  Unlike Scott, Mark sometimes thinks he IS Captain America, Wolverine, and Spider-Man.  He seems to have multiple personality syndrome, and these famous names are his alternate personas.  They also appear to him, Beautiful Mindstyle, to consult about battle strategy.  At least it’s not as weird as when he thought he was avatar of the Egyptian moon-god Khonshu.
The art is somewhat minimalistic, but very active and compelling.  Bendis does a good job of bringing Moon Knight’s inner dynamic to the reader in an understandable way.  Watch for some great cameos from Mr. Hyde and Bullseye.  Overall, the creative team behind this work made excellent use of an unconventional character to drive a story that is both unusual and captivating.  So, as you might have guessed, Marvel cancelled it after twelve issues.  But fear not, hardcovers of Bendis’ Moon Knight Volumes 1 and 2 are available from Instocktrades.com and the paperback of Volume 1 comes out in June.
One snarky reviewer claimed that the whole series was just a publicity stunt to cash-in on naïve fans as they breathlessly awaited the release of the Avengers movie.  Anyone who has read the series quickly realizes that this is absolutely not true.  However, as a blog author, dropping a few names to capitalize on the popularity of current movies doesn’t seem like such a bad idea; as evidenced by this picture:
Thor does make an appearance in Moon Knight, as does Tony Stark.  Captain America has a prominent role, and so does Spider-Man.  Scarlet Jo Hansen is not mentioned.  But Moon Knight’s brief run does make allusions to the upcoming Ultron War, which I know nothing about.  What I do know, is that if you can unscramble  and decrypt the semi-random sequence of letters at the start and end of each line of this blog, it will explain the plot of the entire Avengers sequelincluding how they will bring in Kristen Stewart as the Scarlet Witch and Robert Pattinson as Vision.  Good luck.

Fifthly, I would like to start off by closing with my parting words to my tenth grade chemistry teacher:  “Who’s crazy now, you giant, talking sting-ray?”

Previous: For Those Times When Regular Avengers Won’t Do…
Next: Top 5 Avengers That Could Have Ruined The Movie