My thoughts on “All Star Superman” the Animated Film 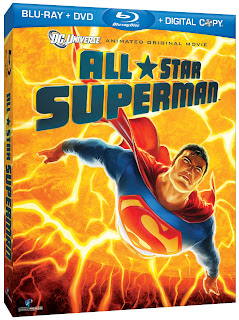 Greetings to all of you and welcome back to Comical-Musings.  In honor of the world not ending this weekend, I decided to spend $1 and rent All Star Superman at a Redbox machine.  This will be an interesting review as:
A.this is a different medium than we usually enjoy (we are watching a dvd this time)
B. I am feeling a little loosey goosey.
I had listened to a review of this dvd previously on www.Ifanboy.com, but tried to make my own observations, rather than piggy back their personal thoughts.  You can tell that I am not just biting off their ideas as I actually didn’t like the movie and they did.

The movie is based on Grant Morrison’s hit series of the same name.  The series brought silver-age craziness back into the fore-front and people were intoxicated by it.  A simple search on Wikipedia shows that “All-Star Superman won the Eisner Award for “Best New Series” in 2006, as well as “Best Continuing Series” in 2007 and 2009. It also won the Harvey Awards for “Best Artist” and “Best Single Issue” in 2008. In 2006 it won the Eagle Award for “Favourite New Comic book” and “Favourite Comics Cover” (for the first issue), as well as the 2007 “Favourite Colour Comicbook – American” Eagle.”  Needless to say, it is typically lauded.
When I look at it, I see it kinda’ differently.  The characters are all funky and do weird things.  There are time travelling heroes that are jerk-faces, Lois is kind of a swearword, and Superman is just chilled out about everything.  I mean, the series is so fantastical that Superman arm-wrestles two superheroes at the same time and when he puts his arms down, there is a giant explosion.  His arm wrestling, lady stealing enemies are ridiculous.  I truthfully think that Samson and Atlas 2 are some of the dumbest characters that I have ever seen in a comic with their loosely defined powers and well-defined attitudes.  It’s shocking to me that they would be featured in such a “great” work.  I would straight kill them if I was Superman. 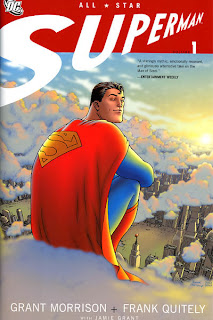 You may say, “well Scott, you’re just talking about the first 30 minutes of the film,” and I would answer you by saying simply, “Yes, because that is all I watched.”  That’s right, my incomplete review speaks volumes.  The only merit I could find was in ribbing it Mystery Science Theater 3000 style.  The animation was even kind of annoying.  I found the animated character’s faces to be lifeless with awkward lips.  I would have preferred to have just read the still comic and probably will, but I feel that animating it might have been a mistake.  I felt as embarrassed showing this to my friends as Jimmy Olsen probably was at the part in the movie where he was dressed in drag.  What I’m trying to say is, “I want my $1 back.”

I didn’t like it, but if you dare to watch it, I would love to know what you think in the comments section?~ Scott Deaux ~
dumb DVD Morrison 2011-05-25
Scott Deaux

Previous: A Great Interview With Cullen Bunn Podcasted
Next: Big things will be popping in June