Free songs
Don't Miss These Posts
Home / Just for Fun / News About Kirkman That I Expected, But Was Also Surprised By

News About Kirkman That I Expected, But Was Also Surprised By

It’s not technically breaking news since I got it from Ifanboy.com, but you may not have heard yet that AMC is talking to Robert Kirkman about adapting another one of his properties into a television series.  His wild success with The Walking Dead has put big dollar signs in the eyes of executives and with Kirkman’s body of work, he could be developing into a TV mogul.  The thing that you may not know is that he could take it farther than many people are even aware of. 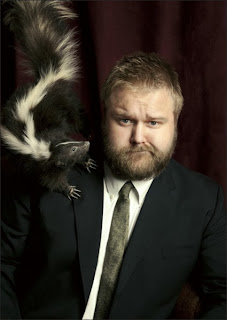 Robert Kirkman is an innovative writer with a great deal of confidence, gusto, and now fame.  Kirkman is known to have a habit of planning for issue 100 of a series when it’s only achieved a second issue.  He writes like a mad dog and seems to only be comfortable when working on many things.  This bearded, Kentucky native has conducted many irreverent interviews with journalists over the last few years, loving to talk and cementing himself as an A-list creator.  That was even before The Walking Dead was on TV.  I can honestly say that anything that I have ever read by the guy has been satisfying.  I respect the man greatly for strong stands that he has taken on encouraging writers to try new things and calling out social norms in the comic book community.  He deserves this success and has worked hard for it.
So “which comic book property is being optioned for it’s own show?” you ask.  Thief of Thieves is being developed by AMC as we speak.  This was a great choice and it’s not unlike Kirkman to have a TV show in the works for a series that has only published two issues.  But, oh, what issues they were?!  Thief of Thieves is one of the favorite new books that I have checked out from Image recently and has the goods to make a great television series.  Everything about it is formulaic, but fun and well done.  How many times have we seen slight variations on Romeo and Juliet and still enjoyed it?  Many.  The same should hold true for the Ocean’s 11 model of heist movie where the sexy charismatic leader shakes up the status-quo while flashing back to antics of his youth.  It’s going to be good and could even be great, but what is really great is what it is doing for the comic industry. 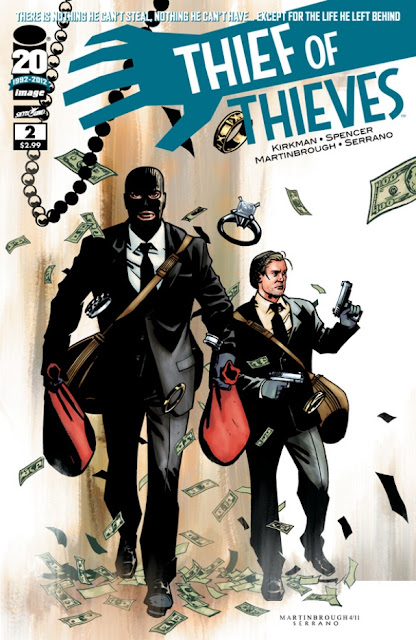 The comic book industry, as a whole, is dying.  Fanboys from the 60s and 70s have become fan men and although the industry has breath with their purchases of hundreds of dollars of books a month, that will change when the blue bloods of comic book enthusiasm die out.  When that happens, the industry will have to rely on the next generation.  Is Super Hero Squad as captivating to children as X-Men was to my generation?  We will see when it all shakes out, but for right now, Kirkman is firmly planting his flag in the entertainment industry.  By succeeding with television shows, he is showing the world that comic books can be a viable source of entertaining and money-making stories.  Kirkman is using zombies and cameras to bolster the chance that their will be comics for my kids and I love him for that.  The startling thing is how far his reach could extend.
When I first saw the headline my mind flooded to all of Kirkman’s books that he is writing and has written and I wasn’t sure which one would have gotten the golden ticket.  I thought that maybe Invincible had made it’s way to impressionable ears and they had seen the potential that I have been saying that it has forever.  I wondered if the first 13 issues were being adapted into an animated, dvd only release from MTV.  My next thought was that Battle Pope and it’s wacky antics, which jump started Kirkman’s career, had found their way to Cartoon Network executives and Adult Swim was ready to release it’s irreverent humor on the stoner population at large (I could see it coming on between Loiter Squad and Metalocalypse).  Maybe Super Dinosaur was going to get the Japanimation treatment and come out wowing kids with it’s somewhat mature story and tech-savvy imagery.  It’s impressive that I hadn’t even thought of Thief of Thieves and it really shows how far Robert Kirkman could go with the right marketing, corporate trust, and overall buzz.  If you like Ocean’s 11, The Thomas Crown Affair, or The Score, you should keep an eye on this one.
(Conor’s Ifanboy.com story can be seen here)
~ Scott Deaux ~
amc robert kirkman the walking dead thief of thieves 2012-04-11
Scott Deaux

Previous: American Vampire Bites Them Back
Next: Great Ideas Can Come From Casual Interactions