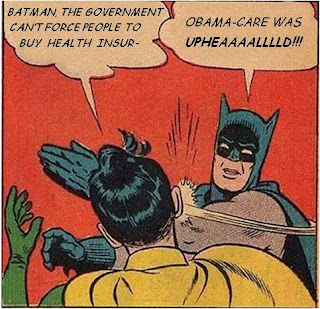 Here at Comical-Musings we strive to keep you up to date in the comics world as well as in the real-world.  The Dark Knight Rises is one of the most anticipated movies of the summer, and it looks like the themes of social justice and the distribution of wealth will influence the plot.

“There’s a storm coming Mr. Wayne. You and your friends better batten down the hatches. Because when it hits, you’ll wonder how you ever lived so large and left so little for the rest of us.”

So, with the Supreme Court upholding the Affordable Care Act, we wondered what would Batman think of universal healthcare?

The answer to that question may not be as obvious as it seems.

Batman has always appeared to be a fairly non-political figure; and we here at Comical-Musings want to remain non-political as well.  The opinions expressed in this blog post are those of Hal, and do not represent the views of any other members of the Writers Blok.  Furthermore, this post is meant to be semi-satirical speculation and analysis that does not advocate any particular political position.  (Mostly, this blog is meant to capitalize on fanboys’ insatiable hunger for information about the forthcoming Batman movie as well as the topicality of Obamacare in order to rack up extra blog views.)

It’s easy to view Bruce Wayne as your typical billionaire, part of the 1%, who has very little concern for the common folk.  I think it’s safe to assume that all of the salaried employees working for Wayne Enterprises already have health insurance as part of their benefits package.  But what about Mr. Wayne himself?  He personally has enough money to pay for all of his healthcare needs, and thus doesn’t need health insurance.  And it wouldn’t necessarily be easy for him to obtain.  He seems prone to injury, and could be labeled as high risk.  Some of his injuries have also been rather serious, for example having his spine broken or being Omega-beamed back through time, and these may have resulted in some ongoing medical issues that insurance companies would look at as pre-existing conditions.   As Batman, he has access to world class medical facilities in the Batcave, so he would rarely ever require hospital care.  Alfred and any of his numerous resident sidekicks could also receive all needed medical care in the Batcave; so they would not need health insurance either.  Being required by law to purchase health insurance for himself and his family might be viewed by Mr. Wayne as an unnecessary hassle. 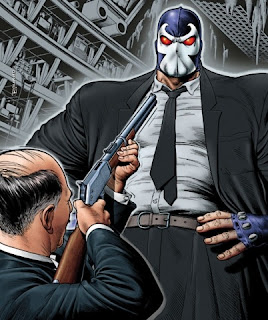 Conversely, Bane might initially seem like someone who would favor universal healthcare.  He grew up in a fictional Central American nation (hence his stylish Lucha mask) so there’s a fifty-fifty chance he’s used to a more socialist form of government.  He seems to like to get things for free (or take them if necessary).  And after a long term addiction to performance enhancing drugs, he would probably be glad that he could not be refused coverage based on his prior medical history.

On the other hand, Bane seems to be more dictatorial rather than egalitarian.  He declared himself the king of the prison where he grew up.  Furthermore, he seems to have a very Spartan survival-of-the-fittest mentality, which would be opposed to providing for people who are unable to provide for themselves.  I believe he would view providing universal healthcare as silly and wasteful.  Not to mention that he prefers to hurt people, rather than help them recover.  So, I strongly doubt that Bane would willingly provide health insurance for anyone, even in the extremely unlikely circumstance that he should find himself with employees, reporting their income to the Federal Government.

At the same time, I’m not convinced that Batman would be inherently opposed to the Affordable Care Act.  Despite being a costumed vigilante, Batman generally sides with the law.  And since Obamacare was passed by Congress and upheld by the Supreme Court, I’m sure he would adhere to it regardless of his personal feelings.  The criminals he apprehends frequently require medical care after he’s done with them, but his tax dollars are already paying for that, as they receive treatment in prison.  In general, Bruce Wayne seems fairly altruistic.  Ultimately, I guess it depends on his views of larger issues like economics and national politics.

What I’m NOT trying to say is that Bane hates Obamacare and Batman loves it, thus it’s good; or vice versa.  In the trailers for The Dark Knight Rises there seems to be a rich-versus-poor dynamic with Bruce Wayne representing the rich while Catwoman and Bane represent the poor.  It is unlikely that their entire motivation is a quest for social justice, and I doubt that Batman will concede to being a “corporate fat-cat.”  What is clear is that Bane has opted for some sort of head strap and a leather jacket with a furry collar, which obviously tells us that movie-Bane does not have a penchant for Lucha Libre, and he gets cold easily.  Beyond that, who knows?

Maybe Batman realizes there are more important things for him to worry about than healthcare law, as he works to keep the citizens of Gotham City out of hospitals and emergency rooms by getting criminals off the streets.

What do you think?  Would Batman be in favor of Obamacare?  Leave us a comment and let us know.

Previous: Batman Minus Batman (Batman: Streets of Gotham)
Next: The Top 5 Comic Characters Who are Both Fast and Furious