We are glad to have your eyes back on Comical-Musings.  I am aware of the fact that we have been doing theme months in July (Independents) and June (Hawkeye), but it’s August now and whatever restraint we had is no longer in play.  In the month of August, anything goes and all of The Writer’s Blok has been encouraged to pursue reviews of more random and challenging comic books in these, the final days of summer.  I, personally, have been looking for lost gold in the form of collected series that received high marks from critics, but I somehow missed. 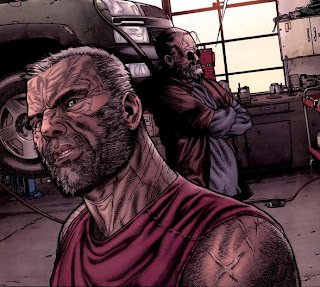 Old Man Logan is one of those tales that slipped through the cracks for whatever reason.  I think that I got it mixed up with Wolverine: The End and therefore never messed with it, but there is no excuse for missing a story this engrossing.  How did I miss that the creative team from Civil War did a Wolverine comic book?!  Mark Millar is one of my favorite writers and I missed this?!  Anyways, I have made amends to the comic gods by gobbling this title up and reading it within hours of receiving it.  The characters are sympathetic, the plot is believable, and I found myself able to put myself in the undeniably small, shiny, yellow and blue pointed boots of Logan. 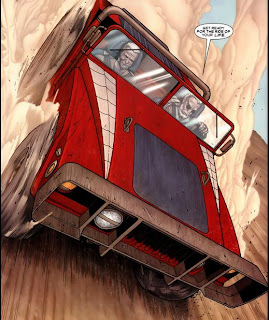 Old Man Logan doesn’t begin a whole lot different than many stories in today’s economic climate.  A pig farmer falls on hard times and can’t make rent.  The way that we can tell that this is a post-apocalyptic story is that his landlords beat him and threaten to kill his family if he cannot find the cash.  The way that we can tell that this is a superhero story is that the inbred offspring of the Hulk are the ones giving the beating.  Either way, it’s not good and Logan is in trouble.  He loves his family and knows that unless he does something drastic, they are doomed.  Enter Hawkeye.  Clint Barton is a wily old blind man with a package to deliver and no eyes to see the road in front of him.  Logan agrees to “drive,” and they hop in the Spider-Mobile which we find out later was won in a poker game with The Mandarin.  But, don’t get mistaken… this is not just a crazy superhero version of Disney’s “Wild Hogs.”  The story is bleak, the consequences dire, and the action bloody.  The world hasn’t had heroes for a long time and it is visible in the decay and nefarious natures of the citizens of America.

As in most post-apocalyptic and alternate futures, the story is fascinating.  There was a sort of supervillain team up where the most evil bad guys in the Marvel Universe organized and won.  They beat the superheroes down and set up this new status-quo where the supervillains split up ruling the U.S.A. as plunder.  The villains most responsible for the downfall of heroism received chunks of the country whereas lesser contributors received a city.  Here is a map to give you an idea of how it shook out:

Needless to say, things are messed up.  The Hulk decided to be a villain out of boredom and killed the Abomination to assume his territory and began breeding to make an entire inbred tribe of hillbilly trailer-dwelling hulks.  Weird, gross, and scary are three words that spring to mind when you see them.  The Kingpin is some sort of gangster that dispatched Magneto when, in his words, “that &$%# got old.”  He rules with an iron fist and murders those who would oppose publicly.  Dr. Doom is not very present in Old Man Logan except that it’s understood that he was a major player in the supervilain attack and that he married Emma Frost, providing her with the Mutant Forbidden Quarters.  This appears to be a place where the very few mutants left are able to live in peace.  The President’s Quarter is a Nazi’s dream.  Red Skull is the president of the United States.  Not much else needs to be said about that.  As people watched their heroes die, the supervillain take over really broke the spirit of the United States.  None more than Logan.

It’s alluded to early and often in Old Man Logan that something terrible happened to him on that night that changed him as a character for the rest of his life.  His pacifistic ways all throughout are somewhat of a shock to the reader as even the most casual comic fan knows about Wolverine’s loose-cannon nature.  Logan has been stripped of this and has vowed never to hurt another human being again.  It’s unsettling to watch him be physically beaten in conflicts and refuse to fight, but then again, he is just trying to make the delivery.  He wants to get paid and get back to California to save his family. 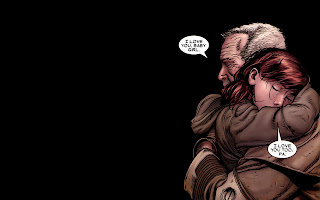 That is all that you are going to get from me.  I was genuinely surprised by the turns that this comic book took and found myself feeling like I was in the passenger seat from the odd beginning to the satisfying, although not as happy ending.  I’m not going to spoil that for you, because chances are that you will like this comic book.  For much of the story, I felt like my head needed to be on a swivel, but it never lost me.  Steve McNiven makes beautiful artwork and the expressions in this book cut like a knife, even without words to explain them.  Whenever I see the gross hulk-people I can almost hear dueling banjos.  When Logan is hopeless, it hurts my heart.  When his rage kicks in, my brow furrows too.  The art had a lot to do with the success of Old Man Logan and it wasn’t an easy job to draw characters from all over the Marvel Universe.

If you are a casual fan and haven’t read many comics before, some of the humor and inside story-telling might be lost on you.  I really think that if you are a “true believer” or even just a well-read fan of Marvel comics, you would love Old Man Logan.  Truth be told, the story-telling is still good enough to where if you like Wolverine and have a base understanding of the character, you could still enjoy this story.  Conversely, if you are looking for something light and fluffy, this one might not be for you.  People die and there are very intense scenes with adult imagery when it comes to violence.  Not a good idea for the kiddos, but a great PG-13 style experience that the violence and disturbing images tip it into R-Rated territory.  As always, you can find this comic book at your local comic store where it is $29.99, amazon.com where you can find different deals, or Instocktrades.com where it is 38% off and comes in at $18.59.  As always, Read On!!!

Previous: Weekly Roundup and a Cool Gem From Stumbleupon
Next: Neil Gaiman: Humble and Brilliant Realist