Whenever somebody asked me what my favorite color was, I would, at first, scoff at the question because I never quite understood how anyone could prefer a color over another color. Then, I would answer with black because I, even as a wee lad, understood the psychological implications of answering that particular question. Black is mysterious, and like most teenage boys, I wanted to appear mysterious so that girls would find me endearing. I start with this anecdote partly because I the psychological implications of the color red at play in Greg Pak’s Red Skull mini-series and partly because I’m still trying to convince the ladies of my mysterious, brooding nature.
Red, in stark contrast to black, is an abrasive color, the color of power. No one needs question why Hitler chose it to define his notorious symbol for his even more notorious regime (though notorious hardly describes just how evil the Nazi pary was … thanks Biggie for understating my point from beyond the grave). Johann Schmidt identifies with the color red for this very reason. It’s the color of blood, the color of life. With it, he can embody the rage that has run through him since birth. I chose to write about this series like this, like Freud might have written about it on a cocaine bender, because it’s clear that Pak wanted to explore the psychology behind a super villain rather than the super villain himself. In fact, the Red Skull, as we know him and as Hugo Weaving portrayed him, never actually appears in this series. From issues one to five, we see only Johann Schmidt, knowing who he will eventually become.
Johann Schmidt is a demented, textbook sociopath, who, at times, appears to care for a select few around him, though we’re never sure if he really cares or if he’s just using that semblance of care to get ahead—the evidence points toward the latter. Schmidt is in a constant state of affiliation-chaos, joining whatever group he believes will catapult him further. At one point, he declares he plans to kill Hitler, and he probably would if it meant becoming the Führer, himself. Of course, as evil as he is, Schmidt is smart. He knows exactly who he should align with and when he should do it, and in 1930s Germany, that was the Nazi party.
Red Skull: Incarnate works because of its reliance on facts we already know, both historically and in comic book continuity, then deepens them. Historically, the Nazi’s are the ultimate villain—with no redeeming factors—that’s why, when I get a killing spree in Call of Duty, I don’t suffer a moral conundrum (not like I do whenever I hop onto one of those poor, defenseless Goombas). In comic book continuity, we know that the Red Skull was once an orphan whose mother died in child birth (his first murder as he views it). Pak explores these facts furthers and creates an interesting character study for one of Marvel’s most easily-identifiable baddies. He explores how a sociopathic serial killer, another form of real-life villain for the real world, works within a society led by just that. Though, Pak never lets us forget just how sad Schmidt’s background is. Orphan, after all, is scientifically proven to be the saddest of all origin stories, but he never allows that to excuse Schmidts actions throughout the story. The origin just complicates them, as any good origin story should. 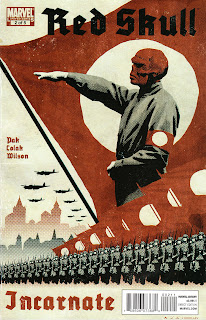 Pak also wrote “Magneto: Testament,” which, of course, examines the back story of Max Eisenhardt—who will eventually become Magneto several years after spending surviving a concentration camp. It’s interesting to see how to sides of the same system results in two different villains. In Max, we have a sympathetic bad guy, one you want to hug almost as much as you want to see the heroes beat the crap out of him; whereas, Johann … well, that’s one messed up dude that’s deserving of a Captain America ass-whoopin’ … to phrase it as articulately as possible.

Historical fiction can be a tricky genre. Too often, it falls into the habit of pointing out just how historical it is (Look! It’s Goebbels! So historical!), but for the most part Pak is able to avoid such pitfalls in order to create an interesting story about someone who, if real, could beat Hitler in an evil-off. An evil-off, by the way, is where two evil people do evil things in a competitive setting, such as competitive puppy killing—most puppy kills wins, obviously.

Only someone as dark and mysterious as myself could conjure a game as twisted as that. Ladies…

Letter From The Editor: You can purchase this series collected into
trade paperback for only $9.59 through Instocktrades.com!
marvel Red Skull The Week Of Villainy villains 2012-06-19
The Black Ness Monster

Tagged with: marvel Red Skull The Week Of Villainy villains

Previous: Penguin: Pain and Prejudice
Next: Is Anyone Irredeemable?