Hello again and welcome to Comical-Musings.  This week, we are honoring some guy with a couple of reviews of a couple of his brilliant independent mini-series.  We have already visited the world of Reload, but today we focus on a different, but similar story.  If you haven’t read the Reload review, I recommend clicking here first.  Red, Ellis’ Homage Comics series with Cully Hamner on art, has some striking parallels to Reload in it’s conspiratorial and anti-government themes, but the stories are very different.  Reload was more of a snapshot into the story of a political issue in a broader world where Red is more of a dying man’s last breath.  Both well done, altogether different. 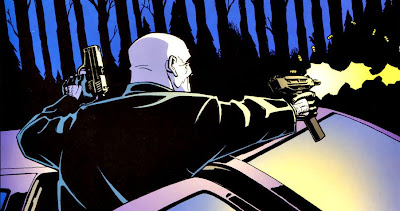 The first thing to note is that although the motion picture Red is loosely based off of this comic book, it is not even close to similar.  The movie Red is a buddy cop movie with spies and romance and aged characters (think Wild Hogs with James Bond saying “I’m gettin’ too old for this &%$#”).  There are fun moments in it…even romantic moments, but this is not the case with Red, the comic book.  It’s tale is so much more bleak.

It is in that bleakness that we find Red’s most redeeming quality, it’s extreme focus.  The CIA decides that former hit man Paul Moses is a monster that needs to be exterminated and he reacts to their actions…that’s it.  There is no funny John Malkovich character or Helen Mirren love triangle.  There is Paul Moses, there is the director and there are dead people.  Not tons of dead people either.  Efficiency reigns supreme as Moses proves that he is disillusioned from the government that made him and just seeks to end it.  Very little style or flare is present in the tactical operation that Moses unleashes on the CIA.  Just them and him.  They won’t leave him alone.  He kills them.

Cully Hamner applies an art style that helps to make this book a little different.  His panels are action-packed and he really nails facial expressions.  I was impressed by the art style as Hamner took cartooning and made it incredibly violent.  It adds a level of creepiness to Red that would not exist without his input. 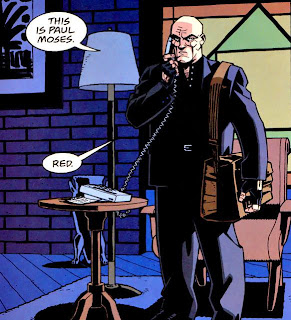 It is in the cold, shark-eyed demeanor of Paul Moses that we find a sadness in Red that sets it apart from anything that I have read in a comic book.  Moses kills because it is all he has ever done.  In Reload, Kiva kills with purpose and drive in her quest against the government, but in Red, all Moses wants is to be done with killing.  I found the tired, shell of a man that is Paul Moses to be a character that is easy to understand and that is what I enjoyed most about Red.  Although Moses speaks sparingly his words reverberate with commitment to his cause.  It does fit stereotypical Warren Ellis writing in the fact that it’s a political action comic about one person against the system, but I believe that Red is more than that.  I can relate to his position of being tired and out of options.  I’ve been there before in my life.  His few words and violent actions speak loudly to a feeling of resolve that is absent in my generation.  Red makes you “feel” a lot of things.  I found myself thinking of forgotten veterans that sacrificed for this country, the downfall of trust in society, and the power that one man possesses.

Red is dark and void of anything fun or colorful, very much in the vein of V For Vendetta.  It will inspire feelings and empathy that is often missing from superhero comics inside your guts.  At the bottom of it all, Red is a grim tale about one man’s bloody war to find peace.  It is not appropriate for younger readers, but is entertaining to anyone who might have liked The Bourne Identity.  It is available for purchase on Amazon.com for as low as $5.99 new and is worth every penny of that.

2011-09-15
Scott Deaux
Previous: Reload
Next: Comical-Musings’ Position On The Reboot of Amanda Waller