Greetings and salutations.  I am happy to have you back at Comical-Musings!  My vacation from violent thoughts ended just in time for my review of Reload by Warren Ellis.  Warren Ellis is a fantastic writer with such credits as Transmetropolitan, Hellblazer, Planetary, and The Authority to his name.  He is typically a very verbose writer with a penchant for swearing and story-boarding in a good bit of realistic and nasty violence.  Warren has never been shy about working with independent publishers and often seems to want to get the story told with whoever is willing to tell it.  There was a short period of time where he was releasing very intense little three issue mini-series that were very good, so I am seeking to highlight two of them this week.  Please be warned that if these were movies, the rating would be R.  If you do not watch R rated movies, please do not “Read More.”  The first is: 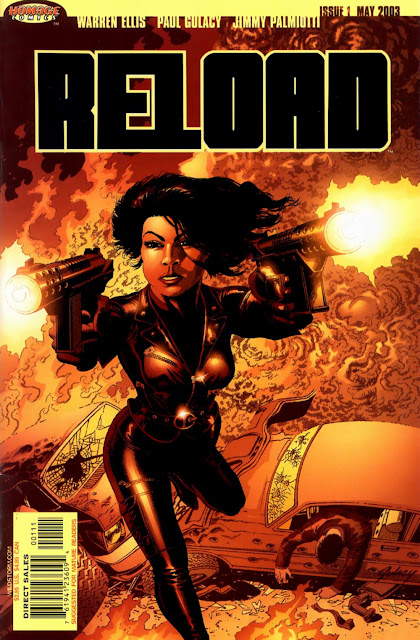 Reload begins as an action/spy tale focused around a mystery woman named Kiva and the counter-terrorist agent Royal who is trying to stop her chaotic attacks.  Kiva pulls no punches as issue number one revolves around her assassinating the President of The United States.  She pulls off this brilliant act of murder with the grace of a ballet dancer dancing across a stage.  The choreography involves one bullet, well-placed explosive devices, an electromagnetic pulse, and subsequently more bullets.  This is all handled and shown in Jimmy Palmiotti’s art in a very realistic way.  We get the idea that Kiva is obviously a trained assassin and that she has been hired to kill the president, but that is too easy a story-telling route for Warren Ellis to take.
Issue two finds Royal’s curiosity about the situation growing and he is more interested in why Kiva is doing this and less interested in stopping it.  Royal and his partner track Kiva to a safe house and then the story really takes off.

Needless to say, Kiva is not killing for the reasons that you think she is.  There is no profit at the end of her hit list and her goals are more altruistic than expected.  She wants to “Re-load” the government and start over with different people in power.  It’s an intriguing concept and after showing Royal sufficient proof, he joins up with her to assault the government.
Issue three is the assault and execution of Kiva’s plan.  The spy subterfuge comes heavy and fast as they cut through capitol security like butter.  The plan changes and leads us, the reader to a somewhat surprising ending.  There aren’t a lot of complicated back story plot lines that come to fruition or anything.  It’s just clear start to finish storytelling. 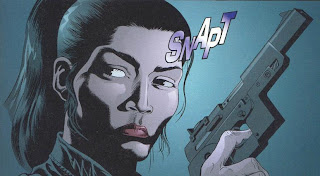 This story was great as it avoided becoming cliche.  There was what I like to refer to as “spy stuff” going on all throughout the book, but it was never self-indulgent.  The plot twists were twisting naturally and were not forced at all.  For being a tiny little three issue series, I found Ellis’ story to be clean, composed, and paced well.  It packed far more punch than expected.  It was a little conspiracy themed, but the plot was easy to follow and the payoffs were enough to keep me reading.  It drops off at the end and I liked that, because rarely do we see real life stories where the expected ending occurs.  Reload made me think about the government, my place in the pecking order, and what one person really can accomplish both negatively and positively.  You can purchase Reload at Instocktrades.com for $9.27.