Welcome to Comical-Musings and thanks for giving us a read on this fine day.  When I told my friends that I was reading a Venom series they all kind of responded in the same way.  “Venom?”  Yes Venom.  This is simply because there is a prejudice that has been born around the character that has pigeon-holed him into scripted actions and obvious storylines.  Well friends, I am here to tell you that Rick Remender’s Venom is not as easily typecast. 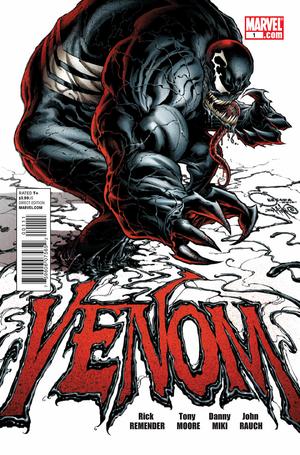 If I were to be truthful with you and not pretend to be hip and on the edge of all things comic book related, I would tell you that I was just as skeptical when I heard Ifanboy.com singing the praises of Venom Volume 2.  I remembered my first bargain box of comics that I had ever purchased and the gem of a Spider-Man issue inside.  It was some sort of a 30th anniversary issue and had Spider-Man and Venom battling it out page after page.  Spider-Man would quip and joke and jump from lamp post to lamp post while all the while a brutish Eddie Brock, possessed by the Venom symbiote hungered for “BRAINS.”  It was a fun read when I was 16, but I have grown tired of cheap thrills.  That is why I am pleased to tell you that Remender’s Venom is anything, but that.

It turns out that all it took for the character, Venom, to grow up and evolve was a change of hosts.  Eddie Brock’s strong-armed Spider-Man hatred could only take it so far.  The symbiote was auctioned off in Marvel Knights Spider-Man and a mob boss’ son possessed it shortly before Mac Gargan, the Scorpion, claimed it as his new identity.  It worked well with Gargan, but eventually was subdued by the United States Government with a desire to make what was meant for evil into a tool for good.  This is where retired, paraplegic, alcoholic, veteran Flash Thompson comes into play.

You may remember Flash as the bully who picked on Peter Parker, but idolized Spider-Man.  It was a great plot device for awhile, but the character got stale.  Creators sent him to war for our country and he lost his legs and developed a drinking problem.  Although his problems fit the Marvel character model for Flash, he got boring and just kind of sad.  Enter the government and the Venom symbiote and Flash gets his legs back, a new job, and many layers of complexity.  Rick Remender is a genius to fuse these things together and make gold out of it.

Now, we have a “super” Flash Thompson, capable of dealing with “super” problems and ultimately it is a fresh and entertaining take on a tired character.  You empathize with Flash and if there is one hallmark of Rick Remender’s writing, it is making you connect with a character.  We want to see Flash succeed and he is fun, intelligent, and driven.  The character of Venom is rejuvenated too as it has stopped being a psychotic entity and under the careful watch of the American government, become a weapon for good.  This Venom is just plain good.

I think that ex-Venom fans could pick this series up and like it.  I think that people unfamiliar or relatively uninterested in the character could glean value from it.  It’s nice to find a new series that is exciting and comes out regularly.  If your interest is piqued and you want to check out a different side of Venom, I recommend reading it from the beginning.  Some series have good jumping on points interspersed throughout the series, but this Venom is good enough to start at issue 1.  Purchasing the first collected volume is easy and cheap as it is only $10.19 at Instocktrades.com.

Previous: Things I’d Like To See: The Name Of The Wind Graphic Novel
Next: Scarlet Spider #5 and The Sadness That Comes With A Loss of Interest