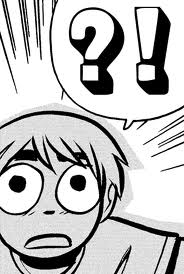 Endings tend to be a tricky thing for both authors and their readers, especially in long running series as is the case for the Scott Pilgrim books.  While reading, expectations are raised, and possible conclusions are formulated in the mind of the reader both of which can be troubling for an author to contend with whilst dotting the final period on his or her work, and with a little help from Edgar Wright and Company, the Scott Pilgrim conclusion became a somewhat hyped affair. Could Bryan Lee O’Malley possibly write an ending that perfectly (or even adequately) satisfied every expectation of every reader who eagerly awaited the final volume? Statistically speaking, no, but was that what he aimed to accomplish? That’s a question with a more complicated and convoluted answer and too easily drifts into pseudo-philosophical territories, and who knows if O’Malley could even answer it? I reckon that he could, but that’s beyond the point. The point is that endings are tricky.
Over at ifanboy.com, Volumes 5 and 6 of the Scott Pilgrim series have been likened to Empire Strikes Back and Return of the Jedi, respectively, and while I don’t necessarily agree with the analogy, there are certainly some similarities. Of course, those similarities often appear in many concluding sequels, from The Two Towers into The Return of the King to Half-Blood Prince into The Deathly Hallows (to evoke a more recent example). In stories of that nature, aside from being things nerds love, they also share bleak cliffhangers and moderately optimistic postludes, in the case of Return of the Jedi, gleefully optimistic (see: Ewoks). Not to mention, those bleak cliffhangers do well to darken the mythology of their respective stories and lend a sense of tension leading into the final chapter, and for a book as satisfyingly silly as Scott Pilgrim, those darker tones are somewhat jarring. That isn’t to criticize Volume 5’s cliffhanger; in fact, I love the moment, though love isn’t quite the right word as it is rather heart-wrenching for this series. Rather, I mean to suggest that O’Malley expertly (it his job after all) handles the tonal shift here. Yes, it is typical, and by now, just about anyone who has seen a TV at some point if familiar with the term cliffhanger, but when handled properly, as it is here, it can be an effective method of adding tension. Of course, for those of you getting into the series now, you will be able to forgo the excruciating wait for the release of the final volume.
Now, where the Empire Strikes Back comparison does find weight is in the fact that Vs. the Universe (volume 5) turns Ramona Flowers into Han Solo, archetypically speaking, setting up her “rescue” or “return” in the concluding chapter. This, I suppose, would make Gideon, the final evil ex, the Boba Fett … or perhaps the Jabba the Hutt … or perhaps the Darth Vader, and it would also make Scott Pilgrim the Luke Skywalker who happens to have a man crush on the Han Solo, who is, in this case, Ramona Flowers. Not that any of that matters. Moving on …
Returning to the idea that the cliffhanger darkens the mythology, subsequently leaving behind all nerdy (somewhat creepy) analogies, O’Malley allows even ancillary characters to resonate emotionally with the reader. I am speaking primarily about Kim Pine, who is sort of a favorite of mine, sort of. Her moment toward the end of the novel (pictured below) is both touching and real, despite being seemingly out of character and taking place in somewhat silly context. This is the beauty of Scott Pilgrim. It’s always somewhat silly, even when it’s supposedly “serious” or emotional or what have you. Volume 5 introduces the Katayanagi twins as the fifth and sixth evil exes Scott must face, and they prefer handling their business with a collection of evil robots. Silly, but it’s their kidnapping of Kim Pine that leads to one of the series most emotional moments. 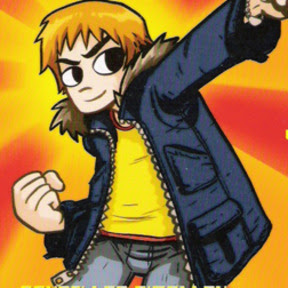 Then, there is the conundrum of Gideon—the, as of yet, unseen final boss—the Emperor Palpatine … curse this stupid analogy! He gets a good line in the last panel of volume 5, “This is Gideon. When would it be convenient for you to die,” but therein lies the problem. How could a character as built up as Gideon has been succeed against the hype, especially when his appearance is preceded by an intimidating one liner? For this to truly be Scott Pilgrim’s finest hour (that is the title of volume 6; what I wrote is a pun—only the best comedy on Comical musings), he needs a worthy, dare I say, awesome foe to overcome, and I’m not sure if Gideon is that. He is certainly evil, and I can assume most readers, if I may generalize, will root for his demise, but returning yet again to that persistent analogy, he fails to achieve Darth Vader levels of villainy. Think of your favorite villains, or at least the villains most frequently toping Entertainment Weekly’s Top Baddies or Top Ne’er-do-wells or Top Villainy Villainous Villains—villains such as Heath Ledger’s Joker, Hannibal Lecter, Anton Chigurh, Norman Bates, et cetera (yes, I purposefully left off Darth Vader as I am truly done with that analogy). At some point, you, whether you care to admit or not, root for those guys. They have charisma, depth, and in a questionable moment of morality, you think maybe it wouldn’t be so bad if they win. Gideon never has that moment. He never once questions the reader’s ethics; he just makes me want to see Scott Pilgrim succeed all the more, which makes him a good villain in the literal sense but not in a way that makes him awesome. 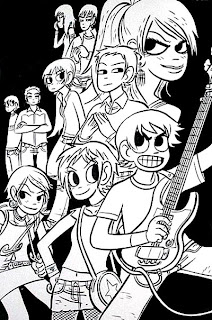 Problems with Gideon aside, Finest Hour still concludes the series on a high note. It’s still amusing, absurd, reminiscent of some old video games, and even has a thoughtful ending. Maybe, it’s not the finest hour of the series (reusing puns!), but it certainly has some of the finest moments, Stephen Stills’ revelation notwithstanding. You know, maybe Stephen Stills is an ewok … curses.
If you haven’t read it, I encourage you to do so.  If you have, I hope I adequately reflected upon your opinions on the book or disagreed with you a manner that’s entertaining.
~ The Black Ness Monster ~
AMAZING indie Scott Pilgrim 2011-08-30
The Black Ness Monster

Previous: Wolverine Goes Insane In The Brain With Jason Aaron
Next: What A Perfect Day To Frequent A Comic Store