As many of you may have read, Comical-Musings is now being taken over by the authorship group of The Writer’s Blok.  These 5 like-minded individuals will be partnering with me, Scott Deaux as the editor-in-chief to bring you larger quantities of content, greater quality content, and different viewpoints that allow the blog to become something greater than just my singular thoughts and knowledge about things.  We are happy to have The Black Ness Monster as a co-conspirator.  At this point in his young life, he already has two self-published novels.  Pretty good for a soon to be college freshman.  His thoughts and opinions echo that of a youthful culture that prefers to text instead of talk and fights reading at every turn.  Although he exists in this world, The Black Ness Monster is not of it.  He is an old soul who is far more comfortable with the Reverend Al Green than anything the top 40s can dish out.  His viewpoint will captivate you and you will know when you have read an article authored by The Black Ness Monster…mainly because he will be credited.
As comic book fans, we are all different.  Technically, as people, we are all different, but that’s neither here nor there.  There are those of us that, because of our fandom, would label us as nerds or geeks or dorks or any variations of the sort, but under those monikers are various degrees of people.  What unifies us, what makes us comic book fans is as simple as our love and appreciation for the under-appreciated art of comic books.  In general the comic books we adore celebrate and exemplify superheroes such as Superman and Spiderman, characters with many strengths and few weaknesses, characters that can leap over tall buildings in single strides.  The Scott Pilgrim series celebrates the comic book reader.
Scott Pilgrim, the character, is a guy—not necessarily an ordinary guy but more on that shortly—not a superhero or a mutant or a freak science experiment or a vigilante or a whatever Aquaman is supposed to be. 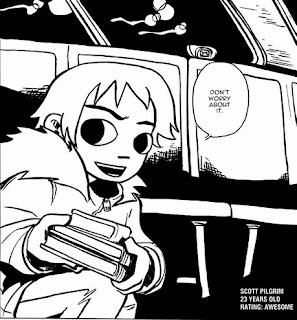 He is a guy from Canada who happens to play bass in a band, lacks common sense and has poor history with women.  Ignoring the whole Canada thing, he’s not unlike the writer of this blog … that’s me, by the way.

Yet he’s not an ordinary guy either—he’s a sort of fantastical representation of the comic book reader, the comic book reader if the comic book reader were living in his favorite video games.  Scott is considered the best fighter in province; he encounters boss fights, and he even levels up.
This blog aims to examine the first two installments in the Scott Pilgrim series, and over the course of Independents Month aka July, we will look at all six books.  Now that we are all acquainted with Bryan Lee O’Malley’s character, let us begin.

Scott Pilgrim’s Precious Little Life opens with “Scott Pilgrim is dating a high schooler!”  One thing I didn’t mention in that long introduction above is that, at the story’s beginning, Pilgrim is sort of an oblivious, for lack of a better word, jerk and perpetual child.  Isn’t that the perception that world has of many an avid comic book reader?  That they are perpetually children?  Perhaps, but we’ve gotten off-topic.  Scott Pilgrim’s precious little life includes rooming with his gay friend, Wallace Wells, playing bass in Sex Bob-Omb and dating the Asian high-school student, Knives Chau, but all of that means nothing when he sees the enigmatic Ramona Flowers roller blade through his dreams, literally or as literal as the proposed fantasy of Scott Pilgrim can get.  Of course, Scott can only date Ramona if he defeats her seven evil exes.

There are actually a fair amount of motifs and metaphors at play in Scott Pilgrim.  Knives Chau represents the immature Scott and Ramona Flowers represents the maturing (one might even say … blossoming, but that would be dumb) Scott.  Her evil exes represent the emotional baggage both Pilgrim and Flowers have to overcome, and while all of that is important, it’s not imperative to the Scott Pilgrim experience.  In fact, all that really matters is fun.  O’Malley wants the reader to have fun, and the emotional weight serves to make that fun that much more rewarding.
Evil ex number one is Matthew Pattel.  He dated Ramona in the seventh grade and has a troupe of hipster demon chicks to help him do his bidding.  Evil ex number two is Lucas Lee.  He dated Ramona and was either in her Drama or Math class (all she could remember is that there was drama).  Both exes are fun characters, though they pale in comparison to what comes in book three.  Indeed, book one’s sole purpose is to introduce the story, the character and the video game-like reality in which the world is set, and book two acts as a transitional segment to the series’ more “bizarre” plot revelations.  That isn’t to discredit the first two books as they are both good in their own right, but much like Scott Pilgrim, they are premature examples of what’s to come.  They are exposition, setting up the forthcoming climax.
Whether or not you’ll enjoy Scott Pilgrim depends on whether or not you to went Professor Xavier’s School for Gifted Youngsters. 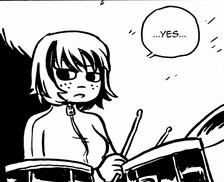 P.S. I didn’t even mention Kim Pine and Stephen Stills, Scott’s band mates, who become two of the better characters in the series.
P.P.S. I also didn’t mention Crash and the Boys (who have an eight year old girl drummer), the band that plays songs less than a second long.
~ The Black Ness Monster ~
AMAZING Scott Pilgrim Writer's Blok 2011-07-14
The Black Ness Monster

Previous: How To Battle Having A Case Of The Mondays
Next: HP Lovecraft’s Haunt of Horror