Some Second Thoughts on Invincible

Greetings and welcome all to Comical-Musings, your place for info about good comic book stories.  We are in the middle of our Month of Independents and I’m hoping that you enjoyed our Sea Bear Vs. Grizzly Shark post as much as your 4th of July celebration yesterday.  When you read content on Comical-Musings this month, you will be treated to comic books from independent publishers like IDW, Oni Press, and Image.  There is no independent comic book that I have found that is better than Invincible.  The last time that we spoke about Invincible (Click Here If You Missed It), it was in the infancy of this blog and really, the first thirteen issues of the series.  In the short period of time between May 10th and July 5th, I have read through issue eighty.  That’s right, Invincible grabbed me by the retinas at thirteen and has held me in it’s grasp all of the way up to current day number eighty.  It really is a fantastic series to read.  Let me tell you why. 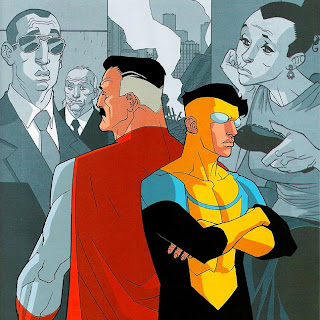 In our last Invincible post, I was obsessed with the way that Invincible created a world that is as interesting as the main character himself, but now I’m in love with it.  There is never a dropped plot point…ever.  Characters that seem pointless in issue twenty are major players by forty-five.  In his amazing work, Robert Kirkman plays with the ideas of right and wrong and the grey area between.  He examines where true power lies in all of us.  He addresses the tight bonds and tumultuous relationships with family and friends in nearly every issue!  Pardon me as I gush, but on issue eighty, I KNOW these people.  They are almost real to me.  I see a character do something crazy and I think, “well, you know Cecil…”  To command the attention of the reader and connect them directly to characters is a powerful skill that Kirkman wields masterfully.  In eighty issues, not only do the characters seem real, but the world itself takes shape and personality. 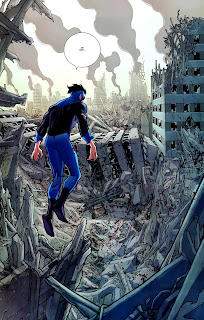 Ifanboy.com‘s famous tagline when discussing comics is: “this week, stuff happened.”  The tongue in cheek humor is a little more true than you would think.  In some comics, nothing happens for weeks and weeks.  They will take weeks to set up an event.  Invincible handles setup much more gracefully.  The world of Invincible constantly has characters maturing, devolving, switching sides…whatever, but it’s in the background during main stories.  It keeps the plot points feeling fresh.  The world of many comic books today seems plastic and often just feels fake.  An alien invasion will occur across the Earth and next issue, everything is all fine and dandy.  The world of Invincible is not like this at all.  “Stuff” is constantly happening.  If the Viltrumites attack your city, Kirkman is gonna leave it busted up for awhile.  When people get hospitalized, the story often takes months for them to heal through montages.  It is great storytelling, because you have a feeling that the events in the world are really happening.
My favorite example of this vibrant story-crafting is the story line where Invincible goes to fight in a big war that has been brewing for 20 issues.  I will try fervently not to ruin the plot for you, but the war takes place in space and there are great losses on both sides.  The main plot device being that Invincible is wounded greatly.  So much so, that he is comatose for the better part of a year.  We see time passing and realize the weight of it when Invincible gets back to Earth and finds that his girlfriend (a main character) has been greatly depressed without him.  In her depression, she gains a great deal of weight and the character is now, for a lack of better words, pudgy.  Robert Kirkman has the guts to illustrate the loneliness and depression that this poor girl has felt by taking the typical comic book female physique and adding seventy pounds.  She doesn’t fit into her costume anymore and you really get to feel her pain.  With this simple, but often unheard of element in the plot, we get that three hundred and sixty degree view of the character and the weight of actions and time in the book.

Another way that you feel the gravitas of actions committed in Invincible is the way that violence handled.  The violence in the book is not an every issue thing, but when it occurs is stark and shocking.  All of these people are drawn a little cartoony (sorry Ottley) so when they punch into an enemy and rip out their entrails it’s a little surprising.  Again, this illustrates how realistic the book is.  As Invincible’s conflicts become greater and more is at stake, people die.  Blood and guts are prevalent sights when dealing with the war or a particularly brutal enemy.  Invincible himself even starts to wonder if the loss that he experiences is worth it to remain righteous, or if he should put down the mad dogs of the super-criminal underworld. 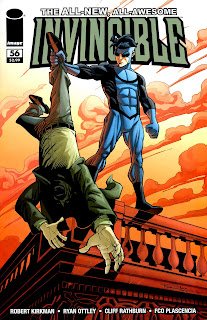 You find a great deal of understanding and empathy with all of the characters involved in Invincible’s bloody conflicts.  The violence is non-gratuitous and used more as a tool to deliver emotion and consequences than to sell comic books.
The violence and the destruction that takes place in the world of Invincible are simply by-products of handling “super” people in a realistic way.  As you grow to learn about and eventually know Invincible, you start to feel the power that is in his hands.  You can see this “super” person and understand his actions, mourn his failings, and rejoice in his victories.  Never before have I felt as connected to a character in comics as I have Invincible.  He is written as incredibly sincere and kind.  I’ve always had a chip on my shoulder for “super” people.  They are typically arrogant, overpowered, and self-involved.  Invincible breaks this stereotype.  He is real enough that it makes the “super” part of him make sense to me.  As you read Invincible, it’s impossible to not see a little of yourself or maybe a best friend in the titular character.  At the end of my review of issue 1-13, I stated that if the rest of the series was good, I would write a follow up post.  “Some Second Thoughts on Invincible” is the completion of that promise with the hope that I will make a “Third Thoughts on Invincible” post.  The last eighty issues have been a great ride and I am looking forward to catching up with this title in weekly issues going forward.  If you want to read this great series, it is available in big collected editions at your local comic shop, amazon.com, or if you wanna’ save a little money http://www.instocktrades.com/