Sometimes, Stuff Gets Annihilated When It’s In Space

A wise man once said “All the best stuff comes outta’ space!”  This always seemed like a maxim that I disagree with heartily.  We had some “Wars” in the “Stars” and some people took a “Trek” to the “Stars” and both of those things were good and provided me great enjoyment.  The problem, I always thought, is when comics go to space. 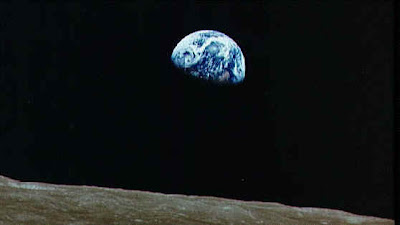 You know what lives in space?!  Silver Surfer does.  He is a silver guy on a surfboard.  This was a great way to sell comic books in the 80s and 90s, but nowadays you have to have a story that holds up a little better than “intergalactic consciousness construct eats planets.”  The stark truth is that as people’s imaginations have been reigned in by harsh realities and the pains of “real life,” heroes like Wolverine and Punisher have been soaring in popularity while cosmic entities go relatively unknown.  This situation is something I support and I find big “space” events and barely understandable galactic events to be asinine.  That is until I read the epic Marvel cosmic crossover from 2006, Annihilation. 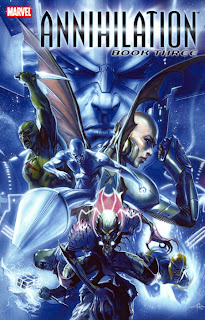 Annihilation is a six part miniseries that features nearly all of the cosmic entities that the Marvel Universe has to offer.  The plot is simple, Annihilus is a bad guy who considers himself the ruler of the Negative Zone and feels that Earth is infringing on his territory.  He sets in motion an annihilation wave of his minions (space bugs) to overpower and destroy our galaxy.  He partners up with Thanos, another jerk with ridiculous power, and is given teleportation technology and the ability to harness the power cosmic.  Thanos is an alien with god-like powers from the planet Titan.  This plot is realized in issue one when the forces of good are immediately losing.  They are overpowered and the United Front is getting beaten badly.  Richard Rider is our entry point as much of the narration is his personal logs.  He is a human imbued with the power cosmic and gifted with the name Nova.  He leads the United Front with a relatively motley crew of “space heavies.”  Drax The Destroyer, Super Skrull, and Ronan The Accuser to name a few.  It is in these characters that we find the hidden gold of the series.  They are all interesting with their own motivations and back stories, but their interactions with each other are also classic.

Drax The Destroyer is a being who was created by Thanos’ father, Mentor, using his god-like abilities.  He is a being of intense power filled with the spirit of Arthur Douglas, a human that wants vengeance for Thanos’ murder of his family.  Mentor sets Drax up as a fail-safe for Thanos’ evil ways.  When I think of Drax, I see unstoppable Wolverine in space.  He looks like a terrible rip off of Kratos from the Playstation God of War videogames, but that is ok because that guy looks awesome.  He stabs things with knives and eats his bug enemies.  we find as the issues roll on that his only goal in his partnership with the Alliance is to kill whatever he needs to to get close to Thanos.  He does and it is a great moment in the book! 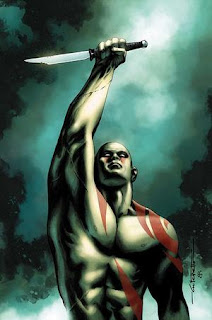 Ronan The Accuser is another intriguing personality.  The Accuser is a central roll in the society of the Kree.  The Kree are an extremely legalistic alien society in which the laws are upheld by the judge, jury, and executioner…The Accuser.  Ronan was a particularly good participant in this roll in his society as he is very patriotic and loyal, but he was accused of treason himself and is now looking to restore his honor.  Not to be too nerdy here, but he gives off a Lieutenant Worf from Star Trek TNG kind of vibe.  He’s very concerned with honor and battle and it serves to make him interesting. 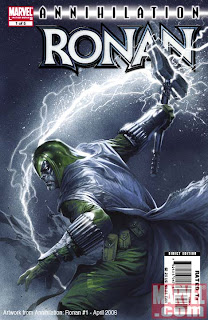 The Annihilation series was really entertaining.  Over six issues, I have been seduced into seeing space as a viable option for setting in comic books.  I can see how I missed Annihilation (it came out at the same time as Marvel’s Civil War) but I am glad that I found it.  I’m very excited that through the twists and turns in the plot (News flash, they kind of lose), the deep character work, and the clever dialogue I want to stay a part of this universe.  To see these tired, old, beat up characters functioning with new life and garnishing new interest makes me feel like I have discovered a whole new world.  I would recommend this series to comic book fans looking for something new and science fiction fans looking for something familiar.  If you like them both, there is no reason not to flop down the $15.49 to get The Annihilation Book 3 trade paperback from Instocktrades.com.  I don’t think that you will be disappointed.  Myself, I am gonna’ rush out to check out Annihilation: Conquest, which is the sequel!  The Marvel Universe is typically my favorite and it is like I have found a whole new corner of it to explore.  It’s surprising that all I had to do was look up into space.

Previous: An Open Opportunity In The Writer’s Blok
Next: What If The Impossible Man Obtained The Infinity Gauntlet