Spider-Man Has A Fever….

Hello to all of my followers and new friends out there!  Welcome to Comical-Musings.  What we, The Writer’s Blok, are attempting to do is to enhance your comic book experience by recommending things that we have read or characters and series that we are interested in.  As the Editor In Chief of Comical-Musings, it is my job to keep things well edited and interesting and to really challenge The Writer’s Blok writers to go to new lengths to amuse and inform you.  I must apologize to you as it is often hard to see my own flaws from my ivory tower, but it has been brought to my attention that I NEVER do anything on Spider-Man…ever.  Today, we rectify that situation.

Don’t get confused, I do not hate Spider-Man.  Truthfully, I love Ultimate Spider-Man.  I’m not mad at Stan Lee for creating him long ago.  I don’t have a problem with him perpetually trying to join the Fantastic Four.  I don’t have a problem with him bringing Todd McFarlane into the mainstream.  I am not mad about how weird he is when portrayed in alternate universes.  I don’t even hold the musical number in Spider-Man Three against him.  I just don’t find him incredibly interesting.  In the world in which we live, the 30,000 (yes, there’s only that many of us) comic book fans have TONS to choose from both past and present.  Spiderman has just never really excited me as a character.

So in my never-ending attempt to buck the system whilst conforming to it, I chose to do a REALLY weird Spiderman story.  Fever is not like “oh wow” weird or “that’s kind of upsetting” weird, Fever is “what the heck did I just read?” weird.  I say “wheelhouse” too much, but this one is WAY out of my “wheelhouse.”  The story deals with paranormal magick stuff and other dimensions and unknown characters and really just alot of things that I do not mess with….ever.  I mean, the solicit describes it as “phantasmagorical!”  That makes this the perfect marriage of the review that should have never happened of the story that I shouldn’t have read that makes people laugh at me when I try to explain it.  I am somewhat of a glutton for punishment, so here we go!

Brendan McCarthy is 100% to blame for Spider-Man: Fever.  He wrote the script, penciled the art, and inked it by himself and the results are absolutely shocking.  He has this psychedelic art style that is beautiful to look at for the common man and most likely an experience to those who are, for lack of better words, intoxicated.  I cannot even begin to think how long the art in this book must have taken, but there are pages that are breathtaking.  When I read this series, I found myself wanting to get tattoos of much of the art.  It is simply amazing to behold.  The problem is that the story is kind of difficult to understand. 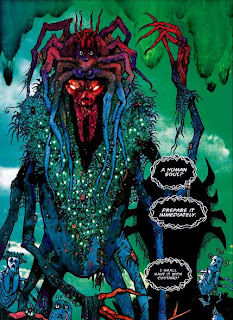 Nearest I can figure, the plot is that while Spider-Man is trying to stop The Vulture from crime, he gets sprayed with pesticide and falls into Dr. Strange’s bathtub.  Dr. Strange doesn’t notice because he’s looking for some satanic dude in some books.  When Dr. Strange leaves his trance, he finds that spider demons, called Arachnix, took Spider-Man’s soul to feed to their leader.
Careful, spoiler alert! (like you would even know what was happening anyways).  The leader of the spider demons says that they can’t eat Peter Parker because he’s part spider so they send him off on a vision quest to catch the Sorror Fly.  This gets real weird and somehow, these two humanized dogs help Dr. Strange find Peter shortly before the radioactive spider that initially bit him convinces him that it was radioactivity AND magick that made him Spider-Man.  Dr. Strange realizes that the Sorror Fly is actually the satanic dude he was looking for earlier, trapped all of these years.  Convenient?  Anyways, they realize that they need to defeat these Arachnix and get Peter’s soul back where it belongs.  Dr. Strange uses his Sorcerer Supreme powers to make a fake Sorror Fly that is actually made out of poison.  Strange and the satanic dude go get the nation of stag beetles and lie in waiting.  After Spider-Man tricks the leader of the Arachnix into gobbling up the poison, there is a kind of fight and the stag beetle nation breaks the Arachnix’ web sending the stupid demons plummeting into oblivion.  Peter Parker’s soul gets back where it belongs.  They show this panel out of NOWHERE: 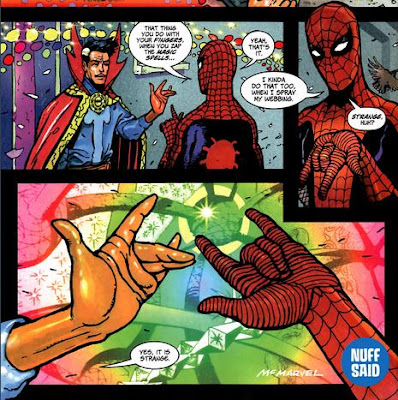 And that is the end.  That’s it.  That is how a comic that shows Doctor Strange riding a rubber ducky-looking swan boat across space and time to play fetch with a magic wand and humanoid dogs ends.  That’s how it ends.  Yes….it is strange Brendan.  The whole dadgum thing that you have created is strange.  Beautiful and creative, but strange indeed.