Greetings and welcome to Comical-Musings.  Today we are wrestling with a subject of a different nature than commonplace comic book reviews.  Although heavily related to comic books, vigilantism is not necessarily caused by them.  Through movies like Kick-Ass and Super, we the people have been fed the idea that one person can make a difference in the war on crime.  This is not a bad idea and we can look at many single individuals throughout history who have effected great change.  Martin Luther King Jr. springs to mind immediately.  He led the civil rights movement in America.  Mohandas Ghandi fought against tyranny in his own way.  Many thought that our President Barrack Obama was going to come in and be the superhero to the American people.  These individuals were able to change things for the better in their own way, but they suffered many hardships.  The films Super and Kick-Ass do a good job highlighting the beatings that costumed vigilantes receive while trying to stop crime.  The whole thing works out because people see the beatings in the films and think “wow, that is fun to watch, but should not be done,” and then they look at actual leaders in our country and others and think “there are ways to create change without punching someone or getting punched in the face.”  No one would ever actually try to fight crime in costume, would they? 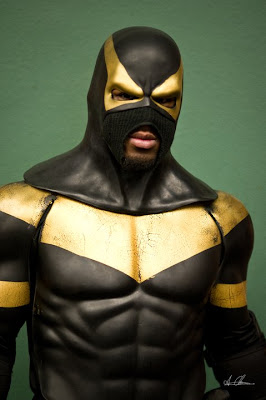 In a move that is more reminiscent of Damon Wayans’ Blankman, there is an actual costumed crime fighter on the streets of Seattle.  Phoenix Jones is a self-made vigilante who patrols regularly.  He probably battled crime last night.  His costume consists of a dragon skin (intensely strong material versus bullets and blasts) vest and stab plating all in his black and yellow color scheme .  He is a mixed martial artist who has never lost a proffessional match.  He suits up in the back of a comic book store and then hits the streets to spray car jackers and club-goers about to start fights with pepper spray and other deturrents (stun batons).  He has even threatened a drunk man with a mace spraying if he attempted to drive his car home.  All in costume.  If this is not weird enough, he is also the leader of The Rain City Superhero Movement.  The Rain City Superhero Movement is a group of like-minded individuals with military and mixed martial art backgrounds that wear costumes and “patrol” too.  In fact, after liking his facebook page, I was encouraged to join him on patrol tonight at 10pm at First St. and Pike “masks optional.”

My knowledge of Phoenix Jones is a breaking development.  He was arrested recently for his actions and spent less than ten minutes in the courtroom before being released.  He unmasked for the judge and it was revealed that he is a 23 year old man named Benjamin Fodor.  The point of his public patrol tonight is to seek media attention for his cause and dispel rumors that he is just some jerk in a costume.  He has been interviewed by CBS appeared at comic conventions and continues to hold to his point that evil exists where people do nothing.  It will be interesting to see how this young man handles media attention.  It will also be interesting to see if this sparks anything in the public.
Already, Phoenix Jones’ Facebook page has 34,358 followers and many of them are in other cities asking him to branch out.  People are afraid in these tough times and it seems that something that many might consider laughable, like a man in a superhero costume, could become a beacon of hope.  There are very angry people in this country looking to seize control of something as seen in the booming youth population in the Tea Party movement and the Occupy events.  Phoenix Jones knows this and is planning on stopping by the Occupy rally in Seattle tonight.  If something newsworthy happens there, the costumed vigilante issue could end up being a polarizing issue with people taking strong stands on both sides.
If Fodor is just using the Phoenix Jones persona as a way to get famous and ruffle feathers, then I would be very disappointed.  If he honestly believes in what he is doing and starts up a costumed vigilante revolution, that would be profoundly interesting.  There are situations in every city across America that go unnoticed by police officers and if there was a ramped up community watch with anonymity by masks for the protectors, that could be a good thing.  The fact that Jones is trained and obviously good at hand to hand combat, uses all non-lethal methods in crime-fighting, and has protected himself with top of the line gear makes me believe in him a little more than some tool rolling around with a shotgun applying “street justice.”  I also think that the fact that he unmasked and answered questions in court would be uncharacteristic of a fame hound.  When you consider that he does not stun baton people when mace will do, that shows intelligence and good decision making in the moment rather than some young guy playing with toys.  He doesn’t seem crazy.  He doesn’t seem dangerous.  In what I have read of him, the guy seems like an open-book trying to do some good.  I hope that he is genuine and successful.  Only time will tell.

Previous: Our 100th Post!
Next: I’m Feeling Lonely For Quality After Reading “The Loners”