Welcome to Comical-Musings.  We are nearing the end of our Month of Independents and there will only be a few more mandatory independent comic reviews coming out.  This review, however is extra-curricular.  If you remember my review on the first five issues of The 6th Gun, it was very favorable (if you don’t remember, click HERE and then come back to this one).  I really enjoyed the somewhat occult-ish world of heroes and villains that Cullen Bunn has set up.  The “rules” of the series are laid out well and I was almost instantaneously caught up in this old western paranormal tale.  Not to mention the fact that I was grateful to find the first story-arc to be more of a PG, maybe PG-13 kind of experience.  This was a pleasant surprise as typically, writer’s who utilize a paranormal theme soak their pages in lust and gore.  The 6th Gun seems to be bent on taking the high road.

In the second story arc, The Crossroads, we have our heroes dealing with the consequences of having the wicked guns in their possession.  There are evil forces far greater than mortal man that would desire the weapons to augment their power.  The most interesting part of the most recent offerings from The 6th Gun is that what endangers Drake, Becky, and Gord the most is the greed of their fellow man and pride in themselves.  Aren’t greed and pride nearly as evil as the seven deadlies get?
It’s this greed that allows a handsome young gunslinger to seduce the fair Becky Montcrief.  Lost in desire for this man, she jeopardizes the safety of her friends and allows herself to be hypnotized.  It’s a good moral of the story to hopping into bed with strangers.  She begins the story in a place of “damsel in distress” weakness and ends up a little bit wiser and a little more jaded.  On the other side of town, Drake probes areas of the swamp that are overgrown with greenery and death.  His pride leads him to meetings with dark creatures that he has no business sharing air with.  Drake’s pride in himself as an unflappable bad mamma jamma is misplaced, although endearing.  You get this feeling that he is trying VERY hard to be a “good guy” and fight off “bad guy” urges.  The character developments are truly engaging.

I loved quite a bit about The Crossroads and nitpicked very little.  First, the good.  I really enjoyed seeing the consequences of character’s actions playing out in the comic book.  There is a causality that is realistic in the world of The 6th Gun.  Becky rushes off to bed with a stranger and almost loses everything.  Billjohn is dead.  He stays dead.  There is a character who practices the voodoo arts and is ultimately used as a vessel to carry the demon that he has been courting.  There are consequences to actions.  Another thing that I really liked is having a strong, intellectual black character.  Often in old west stories, they pitch the big hulking black man as a brutish ex-slave.  Gord is nothing like this as he wears fine suits, reads complicated books that none of the other companions understand, and is well-spoken.  Way to find a way to not be racist even in a period piece Cullen Bunn!  Finally, there is a panel of Brian Hurtt art that is the best way that you can end the story and get me excited for the next. 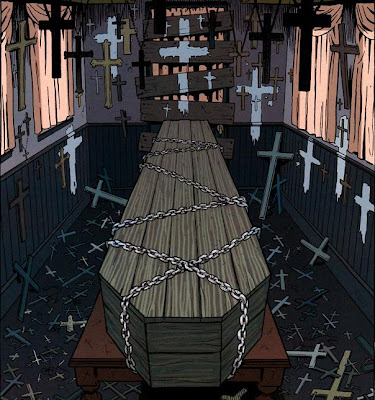 What you see here is the casket of General Hume being transported on a train filled with Cowboys that are a sort of modern day Knights Templar.  Becky and Drake board the train with them at the conclusion of the story.  The casket is a brilliant device to remind you that not only is Hume still dangerous, but he is in very close proximity and rising from the dead is his thing.  This final image evokes fear in what will happen next and sets the stakes.

My nitpicks are slightly petty, but worth saying anyway.  I missed the absolutely crazy plot points from when they were out in the west.  The thunderbird was probably my favorite part from the first story arc and although there were swamp demons and ghost kids, I expected Louisiana to have something cooler than that for me.  Maybe I’m assuming too much, but I was a little underwhelmed by animals attacking.  I thought that the slow introduction of Kirby Hale was handled well, but would have liked to see him a little more menacing. Maybe the plan is to make him into a lovable rapscallion, but I thought in the end of The Crossroads he was just weak and forgettable.
The 6th Gun is still one of my favorite new series and IDW has a real prize on their hands.  You can get The 6th Gun issue number twelve on stands now and the first two trades are available at Instocktrades for $13.99 apiece (a 30% discount).  Check them out if they sound interesting to you!

2011-07-29
Scott Deaux
Previous: I Should Have Let The Green Lantern Movie Escape My Sight
Next: Top 5 Lamest Super Costumes