Free songs
Don't Miss These Posts
Home / Reviews / The Avengers vs. The Hood

The Avengers vs. The Hood

Hello all.  This is a quick post to follow up one that I did on The Avengers of the Heroic Age (the latest Avengers).  The whole reason that I had read issues 1-6 was to get to issues 7-12.  I had read a preview at Barnes and Noble and after realizing that one of my favorite characters was a prominent figure, had to get it.  Not one to skip the background story of 1-6, I read that first and then with bated breath, cracked issue 7. 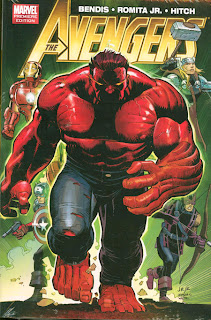 Fresh off a win, the Avengers are doing what they do best in Bendis comics, hanging around talking.  They are startled by a stranger with a frightening message and they are off on a quest to get the Infinity Gems before their unknown foe does.  Infinity Gems have a long and storied past of being lame and ruining everything.  The Infinity Gems each possess specific powers and when collected give omnipotent power to the owner.  The stones/powers are Mind, Power, Soul, Reality, Time, and Space.  The Illuminati, mentioned previously here, have each taken a stone for safe keeping and our story begins with a crafty thief stealing them one by one.  The intrigue in the comic book comes along in the identity of that particular thief.

Parker Robbins, The Hood, has been up and down and all around.  The Hood was created by Brian K. Vaughn in a six issue mini-series where they presented him as an “anti-spiderman” character.  A regular hoodlum who receives great power and responsibility.  It’s just a more villainous take when this power comes to a criminal.  The Hood finds acceptance in the super villain community and rises to power in the Marvel Universe.  He takes the reigns of the Kingpin’s organization in Dark Reign and becomes a leader to all of the fledgling villains.  His street smarts, sharp wit, and realistic take on things propel the villains to an almost mafia-like structure.  Loki gives him Norn Stones which are asgardian magic rocks that fill him with power.  Parker is on top of the world when Siege begins and as a member of Norman Osborn’s Cabal has a place in the ruling class of the world.  By the end of Siege and through various events, Loki takes the Norn Stones back and there we find Parker…powerless, alone, imprisoned.  The thing is that Parker’s intellect and drive were always his best qualities anyway.  He figures a way to escape prison and get the Infinity Gems.  He almost pulls it off too.

The ensuing battles and adventures that come out of this conflict are very well done.  Bendis does a good job making this feel similar to an Indiana Jones movie with Harry Potter’s magical sensibilities.  We have desperate quests where our heroes are striving to get the gems before The Hood does and he constantly stays one step ahead of them until someone rips one of the gems from his hand.  That climax sets up the events where Parker is beaten, Iron Man receives redemption, and the Infinity Gems are removed.

I just want to give brief praise to Bendis and John Romita Sr. for making this story as good as I expected it to be.  If you were to tell me that I would like a story revolving around Infinity Gems, I would laugh in your face.  But, here we are gushing about how good it was.  I love The Hood’s journey for power in this book.  You get the feeling of loss that he has experiences and they did justice to his cunning while at the same time playing out how the story would end up.  He couldn’t possibly win, because when all of the chips are on the table, you can’t stop The Avengers.  You can purchase this series in trade paperback for $15.49

Tagged with: AMAZING The Avengers the hood

Previous: How To Read Comics… (Part 2)
Next: Wolverine Goes To Hell