Hello all, joyous news!  I finally saw The Avengers movie.  This post about it has spoilers.  It was a great effort to get me to it as I had one friend volunteer to babysit my special needs children and another friend treat me to the film.  Through this great push by my friends to overcome obstacles both social and financial, I found myself in front of the big screen at 1:20p yesterday afternoon.  I can say that after I watched the movie, poured over all of the thoughts that I had, and let it sit for a night, it does not disappoint. 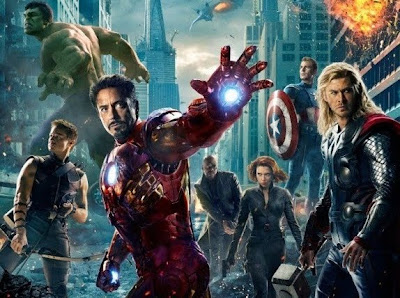 The Avengers was great because it was giving the fans exactly what they want.  The hardcore comic book fanbase has been reading for a long time and are familiar with concepts like Thor and Hulk fighting or Mjolnir hitting cap’s shield.  To include many of these allusions to comics past was doing a great service to the men and women who built the industry with their pocket change (yes, comic books used to be inexpensive).  I felt that although the movie used some new concepts for realism’s sake, there was still enough mighty Marvel comics magic there to send my spider sense tingling.

The Avengers was great because it was just a good movie.  Joss Whedon is no slouch and just because he is familiar with comic books doesn’t mean that he wasn’t going to put his all into this film.  To be honest, they could have put out crap on celluloid (Spider-man 3) and people would have still gone to see it and put money in Marvel Studio’s coffers.  But, by making this a great movie and getting actual “acting” performances from the actors Joss Whedon has sky rocketed himself into even more notoriety.  The one thing that got me the whole time was the camera angles.  We always were looking at something interesting and in an interesting way.  That is skill from a production team and should be lauded.

If I were to be critical and take potshots for the sake of it, there would only be a couple of things that I would bring up.  I felt making Annihilus less robotic was a mistake as that is my favorite part about his character in comic books.  I appreciate the gutsy-ness of Thanos as the reveal, but think that all of the people on the periphery might be lost by it.  Yes, I want to bring people from movies to comics, but right now, that is not the route that people are taking and therefore, we cannot force it.  Cap is good and they did a good job making me see Chris Evans as a man, but he could have had somewhat better lines in the film.  Also, not sure how he just knew where to go on the helicarrier to find the hydra-tech.

Anyway, little loopholes don’t kill movies and The Avengers is absolutely brilliant.  Go watch it with your comic book friends and let your freak flag fly.  Go watch it with your “average joe” friends and be ready with source material when they want something to transition to.  This movie made so much money that it completed it’s best objective in guaranteeing that there will be more comic book movies for a long time and that more producers will look to colored pages for scripts.

Tagged with: AMAZING movies The Avengers

Previous: Indefensible and Humor In Comics
Next: The Hottest Issue In Comics This Week