Free songs
Don't Miss These Posts
Home / Reviews / The Death Of The Punisher?

The Death Of The Punisher?

Extra!  Extra!  Read all about it!  The Punisher is dead!  Frank Castle is dead!  That’s right, you are back at Comical-Musings, your source for good comics and today we are going to briefly discuss something that happened in the Marvel Universe last year that slipped right by me.  Frank Castle, The Punisher was killed.

Now it is important to note that characters die in comic books all of the time and come back three issues later.  “I was just kidding!” they might say after returning from being lobotomized.  Anyways, we have seen this happen myriad times with  Phoenix, Captain America, Superman, and the list continues.  Usually when they kill off a “smaller-scale” character they stay dead.  They don’t care enough about many characters to give them a decent death let alone resurrect them later.  It appears from the Dark Reign story line that Frank Castle got the full treatment.  First, lets start with his death. 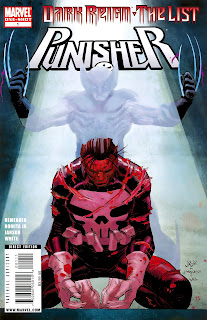 Dark Reign is in full swing at the time “Dark Reign – The List: Punisher” occurs.  Norman Osborn, The Green Goblin, has seized control of national defense contracts and set himself up as the new “Nick Fury” of the Marvel Universe.  He makes a list of individuals that he wants dead and then goes after them with reckless abandon.  At the beginning of this issue, we see Osborn with four H.A.M.M.E.R heli-carriers and countless troops descending on Punisher’s position.  Frank’s impending doom is nearly palpable.  In the end, The Punisher runs and Dark Wolverine, Daken has to hunt and kill him.  Sadistic Daken finishes Punisher off on a rooftop ripping him to pieces with his claws.  As Frank Castle lays dismembered and Daken revels in his victory, you see a very dark, but very realistic moment.  This was an answer to the age old question “Who wins Wolverine vs. The Punisher?”  Obviously, Wolverine would win and Daken further proves it by defeating Frank even though he is the Diet Coke to Wolverine’s Coca-Cola.  Of course Daken would win this fight.  He has a healing factor and the military might of the USA behind him.  And this is the way Frank would want to go out too.  Inflicting damage on the way out and having to be utterly destroyed by extreme force.  People die.  This was Punisher’s death.  Or was it? 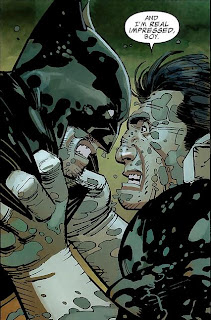 Daken kicks The Punisher’s dismembered parts off of the building that he murdered Frank on.  Some Moloids, subterranean monsters, at the base of the building grab the body parts and run into the sewer.

Man Thing, Morbius, and some “Legion of Monsters” sew him back up Frankenstein-style and we find that The Punisher is now Franken-Castle.  He fights with the monster people for a few issues (far too long) and eventually finds a magic bloodstone that restores him back to life.  This is not that interesting and terribly upsetting. 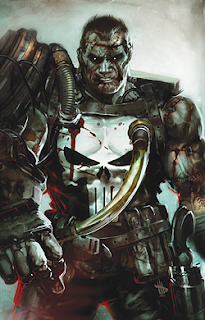 What has always made The Punisher a great character is how grounded in reality he is.  Grant Morrison could never do a good Punisher story because he is too simple a character.  The Punisher kills mobsters, gets revenge, is occasionally funny, and then does it all again next issue.  That’s it.  The Punisher is a street level vigilante with few rules and no remorse.  The Punisher does not get brought back to life with robot parts to fill out a stupid archetype in a “monster force” team that already has a vampire and a swamp creature.  This is beyond stupid.  They try to handle it realistically in the books, but it just ends up inane.  The creative team even adds Wolverine in to the mix (guaranteed sales boost) and they still mess that up.  Wolverine won’t let Franken-Castle kill Daken.  That is stupid.  Wolverine still wants to kill Scarlet Witch for House of M and it has been YEARS.  How can they ruin The Punisher’s identity this badly?  It’s disconcerting.  Even if…all of this stuff happens, The Punisher does not utilize a magic stone that makes him 100% healed after all of it.

The death and ressurection of The Punisher stretched through multiple Marvel books.  Rick Remender took Frank to places he has never been before.  They may have been interesting places to go, but they were wrong.  Congratulations to Remender for doing something different, but what was done seems a bit too jarring to me.  Frank deserved to die on that rooftop.  It was the perfect end and packed a great deal of punch.  The Punisher would live on in the wildly popular MAX titles and one-shots.  The regular, Punisher-less Marvel Universe would be ok.  Now, however, Marvel continuity has a black spot on it’s history and Franken-Castle is a skeleton in their closet.  Frank went out like a warrior in his death, but got used for cheap thrills in his resurrection.  Maybe, sometimes, great characters need to stay dead.

2011-08-12
Scott Deaux
Previous: Spider-Man Has A Fever….
Next: The Government Doesn’t Want You To Listen To This Podcast