Free songs
Don't Miss These Posts
Home / Just for Fun / The Illuminati: In Control Of Everything Since 2006

The Illuminati: In Control Of Everything Since 2006

Hello, hello!  Welcome to Comical-Musings.  We are your place for suggestions, reviews, and subterfuge.  We are trying to ignite a passion in the people of the world to read stories with pictures.  Our goal at The Writer’s Blok is to be a voice for the industry, a voice that speaks positively about comic books rather than condemning them as childish.  Won’t you come along with us? 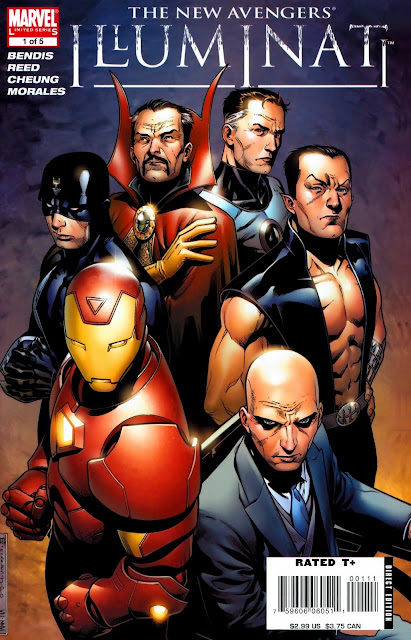 Anyways, that was weird.  Today I am reviewing the New Avengers: Illuminati series.  The New Avengers came on strong at the beginning of 2005.  The Avengers had a long running history in Marvel and it was time to shake things up.  Enter, Brian Michael Bendis.  Bendis is famous for killing mainstays in the Marvel Universe, not being able to write Wolverine very well, playing favorites with Spiderwoman, and writing most of the popular stories in Marvel Comics.  Bendis is about as “famous” as comic writers get and there is a reason for that.  He is a fantastic writer.  Bendis is responsible for such tomes as Ultimate Spiderman, Alias, and Powers; really canonical comic books.  He was a good one to take on refreshing the Avengers.
The New Avengers had a radically different line up than had been seen in Avengers books previously.  Characters like Spiderman and Wolverine now hung their hats at Stark Tower.  The New Avengers was really the best of the best, it was wildly successful publicly, and brought new fans in and old fans back.  Bendis literally breathed new life into tired characters and none more so than the Illuminati.
In issue number seven, Bendis introduced the idea that the “rulers” of the planet formed a secret governing body as a method of checks and balances for each other and to deal with problems that were too big for one branch of superhero-dom to handle.  The Illuminati consisted of founding members: Charles Xavier, on behalf of mutants.  Black Bolt, on behalf of the Inhumans. Namor, on behalf of the inhabitants of the ocean.  Dr. Strange, on behalf of the arcane and mystic forces.  Tony Stark, on behalf of the common man superhero community.  Reed Richards, on behalf of the scientific community.  These representatives are shown to be in a hidden society in issue number seven, but the stories of that group’s covert work are not really seen until the Illuminati series.

The New Avengers Illuminati series shows us that these men have been behind, around, and all up in all of the major events of the Marvel Universe (some known and some unknown).  In this short, little, five-issue miniseries it is revealed to us that these six individuals have been the catalysts to everything from Secret Invasion to when the new Captain Marvel landed on Earth.  They fight together, solve problems, and bicker with each other.  It’s at it’s core, a team book, but with an unlikely cast of immensely powerful beings.  They have protected the Marvel Universe and have gotten it into trouble time and time again in situations that are so far over the heads of common people that they would never know about it.  It’s a cool “conspiracy theories revealed as true” kind of story.  The true genius of the story is found in how it is put together.

Bendis weaves a “Behind-the-scenes of continuity” tale that causes us to suspend disbelief and go with it.  You almost feel like you are being trusted with these secret stories of this ultra-powerful group’s hidden actions throughout the history of the Marvel Universe.  Illuminati takes two dimensional stories and makes them easier to feel and touch by adding a third dimension.  In the case of the plot of Secret Invasion, it takes a three dimensional story and makes it four dimensional.  Issue number five of The Illuminati arc makes the beginning of Secret Invasion become like a black hole, sucking you in and compelling you to read on.  One could argue that issue five of Illuminati was better and more entertaining than the whole Secret Invasion storyline.
The New Avengers Illuminati should be entertaining to anyone who reads it, but I fear that the joy that comes from “light bulb over the head” moments is reserved for those well versed in the Marvel Universe.  It’s very well written and provides excellent back-stories that we never even knew were there.  If you are a “True Believer” and “Make Yours Marvel,” then you have no reason to not buy this comic immediately.  It’s available on Instocktrades.com for $9.29 in trade or $12.39 in the premiere hardcover edition.

2011-08-15
Scott Deaux
Previous: The Government Doesn’t Want You To Listen To This Podcast
Next: The Results of Our Poll!